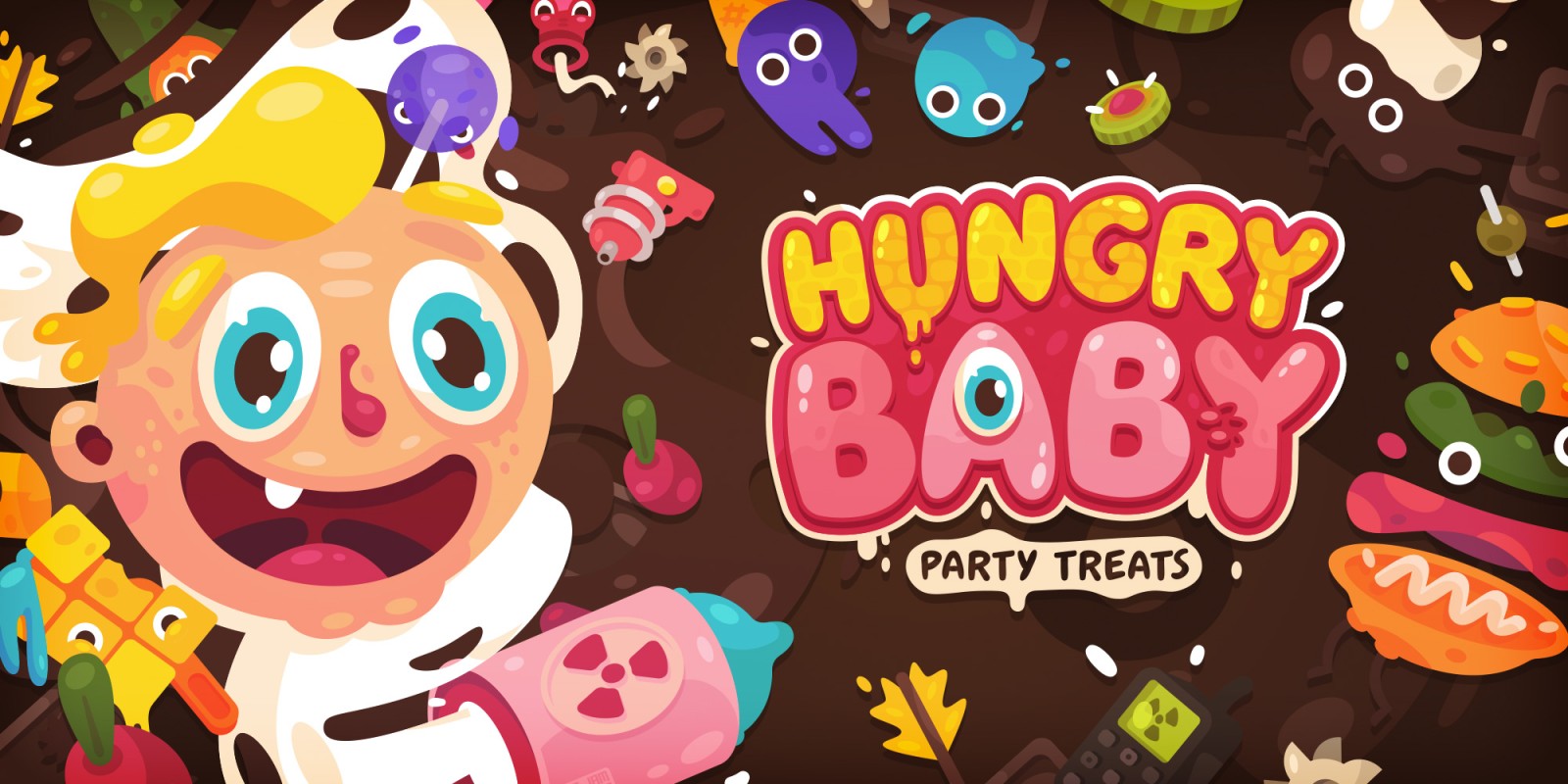 The Baby in Hungry Baby: Party Treats is hungry so your goal is to feed the baby as fast as you can before it gets angry. Sounds simple enough but anyone who has children will know that feeding babies can be a task in itself. That pretty much sums up the story, which serves as a simple plot to give the game some basis.

In the game there is up to thirty characters that you can play as, while you may think that these are actually human characters, they’re food items that you may eat. You can play as either a dessert (Ice Cream, Candy, Candy Canes), Meal (Hot Dog), Fruit (Grapes, Watermelon,) or Drink. Your goal is to get the food items you selected into the baby’s mouth.

You will have to collect four timers on the map to wake the baby up so that you can proceed to put the food into the mouth of the baby. while that might sound easy you will encounter many obstacles when trying to reach the baby mouth. Traps such as thunder creating road blockage causing you to find other ways to get around to reach the baby. It’s like going through a maze and you will encounter issues that will make you strategize.

While there may be obstacles, there are much easier ways to avoid these obstacles with powerups. Power-Ups help you get through to the baby a little faster. To gain power-ups you have to travel a certain distance on the board in order to receive them. When you receive a power-up, it will be at random so you can either get a checkpoint power-up which you will be able to place it on the board to where you will want to spawn at if you ever run into a trap.

Magnet power-ups will help you draw items placed on the map to you, radar powerup will detect if there is any traps nearby that you may need to avoid, and shield power-up will protect you from any traps that you may encounter. These are just the basic power-ups that you will experience using in the game, there are more powerups in the game but I want to save those for you to experience in the game.

The game has two modes: party mode, and campaign mode. In party mode, up to four players can play on the same board to race and see who will get to the baby first and feed it. It may seem basic at first but once you play the story mode you will unlock other modes inside party mode that you can play.

There is up to four modes classic (obviously), last ice stand where you have to run as quickly as you can to get into the fridge, Go-Go pan has you run as quickly as you can go get into the Pan. In Icy Race, you have to make the full number of laps in order to win, and Food Cart where you will have to run to press the button to activate the food cart to make its way to the baby mouth to feed it. So there is a variety of ways you can play the game.

In Campaign mode, there are fifteen levels that you will have to play through. There are three rows of levels each has five levels. You will have to collect a certain amount of stars to move onto the next row of levels in the campaign. Throughout the campaign you will only experience the classic mode in the game alongside the other added features, like the size of the board will begin to increase as you progress through the campaign, to make it harder for you to reach the baby and feed it.

Besides playing on the classic board, you will have levels that feature a winter themed board, rainy themed board, and many more are in the game.. Like I mentioned previously about the other modes in party mode. You will have to unlock the additional three modes through Campaign mode.

The game’s audio is really good especially for a game of its kind. the theme song has a unique but catchy beat. The in-game music while playing is very upbeat and fast pasting. The soundtrack makes you feel as if you are at a party for infant children. (also the sound effects for the various items being used is very good.)

Happy Baby: Party Treats’ visuals are very high resolution but gives off a “circus” kind of theme when you launch the game there are curtains that open up as you click on each mode that makes it feel as if you are a participant at a circus.

The game’s visuals work well both docked and in hand-held mode. The only difference I can say is that it looks a little bit fuzzy in hand-held mode. You won’t notice it much but if you are someone who plays Nintendo Switch games both hand-held and docked you may notice some differences but not much that would ruin your experience in playing the game.

If you’re someone who is looking for a game to play with not just family and friends but for your children. This is a great family-friendly game that not only adults can play but children too. There are a lot of great features and modes in the game that can be played.