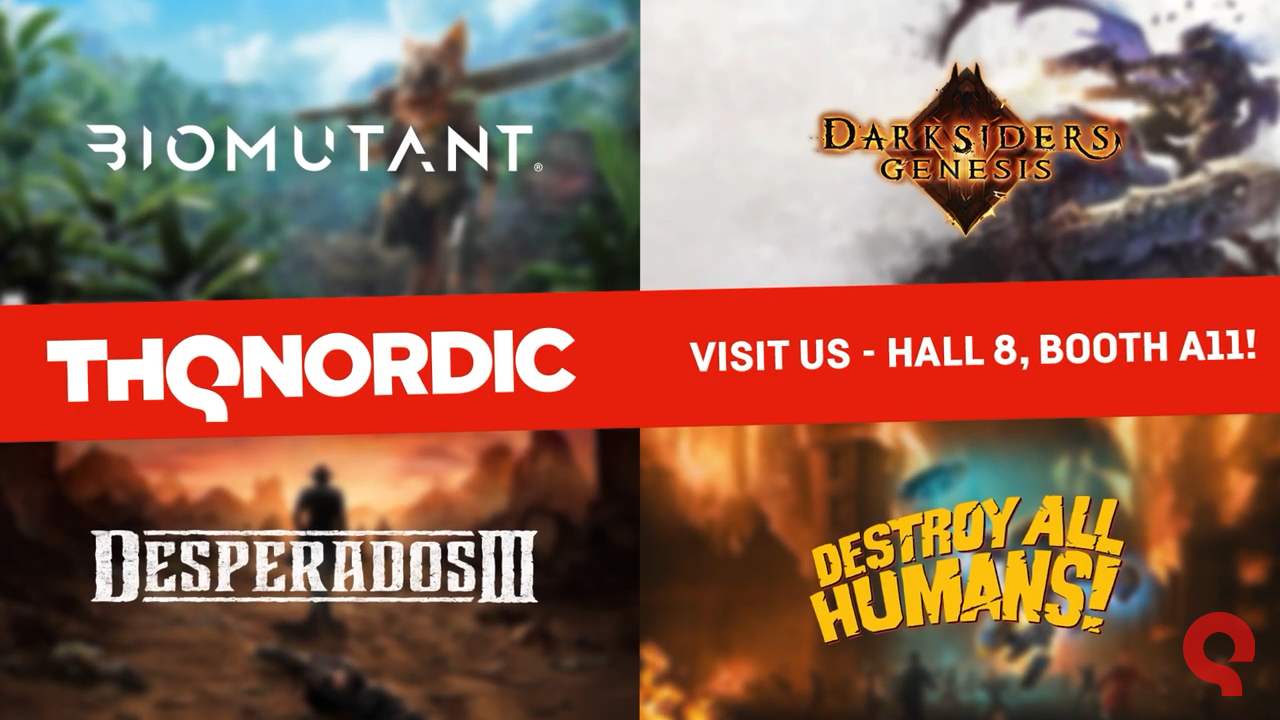 THQ Nordic have revealed their plans for Gamescom this year. It includes a list of 6 games playable at their booth and an unveiling for an unannounced game. The list of playable games includes Destroy All Humans, Darksiders Genesis, Desperados III, Biomutant, and playable for the first time ever, SpongeBob SquarePants: Battle for Bikini Bottom – Rehydrated.

We have the official announcement from THQ Nordic below.

Vienna/Austria, July 24th 2019: Ah, that time of the year again. THQ Nordic is thrilled to show a fine choice of great games when the world’s biggest gaming convention will open its doors on August 21th in Cologne, Germany. THQ Nordic will host six playable games on the show floor.

Check out our breathtaking gamescom 2019 trailer below.

Three new games will be shown behind closed doors only, one of them being a world exclusive announcement which will be revealed during the gamescom Opening Night live stream on Monday, August 19th at 8:00 PM CEST / 2:00 PM EDT.
More about the Opening Night here: http://n.thq.com/PcMk30pbNYe
Players can visit our booth in Hall 8, A011 and get their hands on six games:

Biomutant
The post-apocalyptic Kung-Fu Fable RPG will be back at gamescom, and is ready to excite players and media alike – again!

Darksiders Genesis
War or Strife? Choose your Horseman and slay demons in the new co-op mode.

Destroy All Humans!
Take one giant step on mankind and help Crypto to infiltrate, exterminate, and dominate all of us!

SpongeBob SquarePants: Battle for Bikini Bottom – Rehydrated
Oh yes, kids, he’s ready! Be among the first people in the world to play the long-awaited SpongeBob game.

Stage show? Stage Show!
Like in the past years, THQ Nordic will have stage show every day, starting at 11:00 AM, from Tuesday to Saturday. See the devs showing off their games, ask questions, win prizes in raffles and… Grab. Some. Loot!

Gamescom in your living room
Can’t make it to Cologne? Don’t worry, we’ve got you covered. THQ Nordic will have a livestream from the showfloor in Hall 8, showing off all of our great games and more, including interviews with cosplayers, game developers, and internet personalities. Tune in to one of our channels starting on August 20th, 10 AM CEST on:
Twitch.tv: https://www.twitch.tv/thqnordic
YouTube: https://www.youtube.com/user/NordicgamesAT
Facebook: https://www.facebook.com/THQNordic/