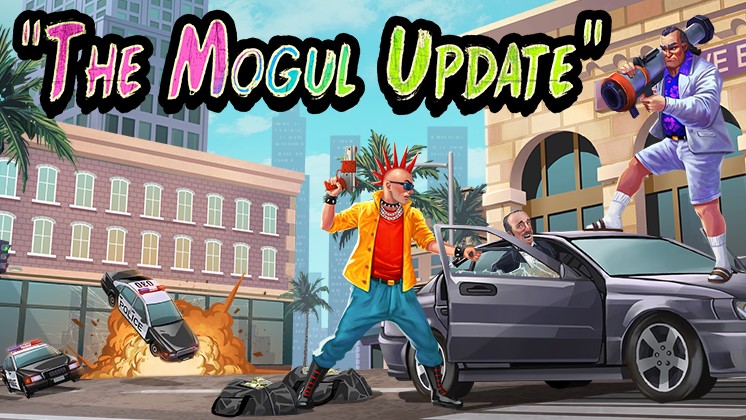 Vblank Entertainment have announced that they have released a new update for Shakedown: Hawaii. “The Mogul Update” is out now for PC and PS4 and currently is under certification and for Nintendo Switch and PS Vita. The 3DS version of the game is still on the way and will most likely have the update include before release.

The update fixes a number of small bugs as well as adds new dialogue to assist players in to playing the missions in order to earn money quicker.

We have the full details below.

The first big Shakedown: Hawaii update is out now on PC and PS4, and in certification for PS Vita and Nintendo Switch.
Titled “The Mogul Update”, it adds a bunch of features, fixes some bugs, and tweaks a few things to better steer the gameplay experience.

Shakedown: Hawaii is designed such that after you’ve completed the main story missions, you’ll have the resources to easily acquire the entire island. You can earn extra cash and territory by completing shakedowns, but the big payouts occur on story missions. This wasn’t conveyed clearly enough initially, and some players focused entirely on the shakedowns, ignoring the main missions, and thus, struggled to earn the capital they needed for island domination. The update adds more dialogue and guidance to better steer players towards the end goal.
Likewise, multipliers don’t need to be added to every business. With a few strategic placements, you can achieve 100% without any tedium. However, many players have expressed the desire to max out their entire city, so this update makes it faster and easier to do so.

What else is in the update?
– More Shakedown Scenarios (even more variety!)
– Car Repossession (earn extra cash for your Subprime Auto locations)
– Weapon Pawning (earn cash and clear out inventory)
– Shop Icons added to the map
– Expands some building interiors
– Character upgrades can now be unequipped
– Faster property and multipliers purchasing
– Salary can now be increased quicker
– Police chases improved
– Horns/sirens added to vehicles
– Bug fixes (nearly all reported bugs have been fixed)