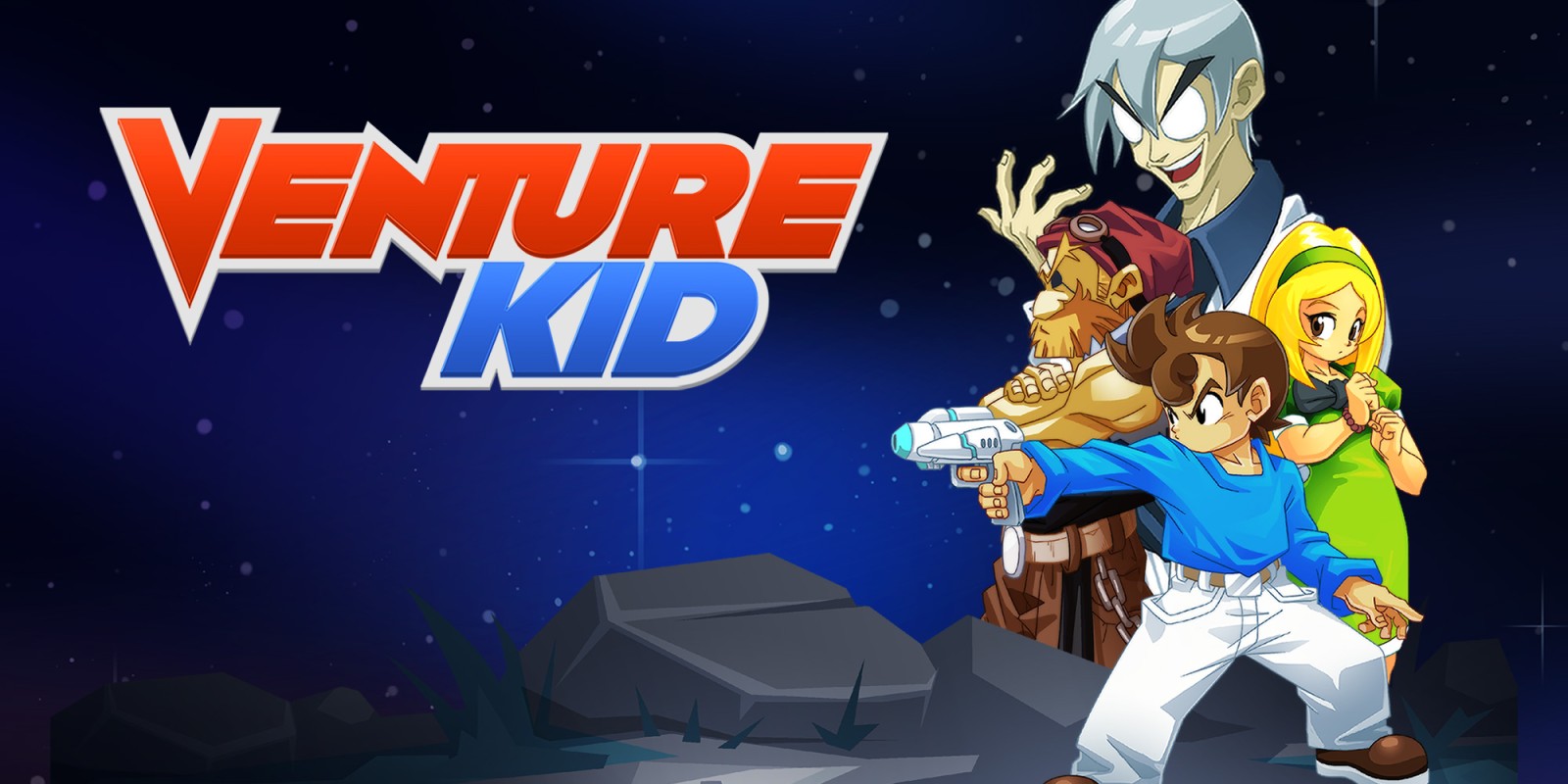 From Norway based developer Snikkabo, Venture Kid is a Mega Man inspired action platformer that has previously debuted on the likes of Steam and the App Store. Only, as it turns out, publisher FDG Entertainment is by no means finished with the game.

Having already handled the publishing for its previous releases, they have also seen fit to bring it to the Nintendo Switch as a console exclusive and in terms of how it’s changed, two new modes have been added the Switch release was rewritten in C++ from scratch.

On a distant island, Andy was casually collecting colourful orbs with a friend, only to have an explosive incident occur, which is soon followed by the news that Dr. Teklov is building as a space fortress, which is to act as “a weapon developed for keeping the peace.”

Knowing Dr. Teklov as they do however, Andy and friends know Teklov needs to be stopped and that’s precisely what Andy must set out to do, with the help and weapons, available to him.

As a platformer of Mega Man inspiration, gameplay of the main campaign, (be it Classic or Adventure,) consists of eight levels for players to venture through before fighting a boss at the end of it. Only once all eight levels are beaten, a ninth one will become available for players to undertake.

At the end of each level, players can earn a new power-up to help make their quest a little bit easier. One such power-up is a boomerang that is handy for collecting items, such as orbs and the other is a double jump.

The only downside to the items however (use L and R to cycle through them,) is there are times during gameplay where they feel a little underused. They also have an energy bar, which means you can only use them so many times before you run out.

Fortunately however, defeated enemies can drop an item that helps replenish energy. You can also use the orbs you collect, in the in-game shop, which can be accessed any time during gameplay, except for during boss battles, to buy a bottle that replenishes weapon energy.

You can also purchase extra lives, a weapon manager and even expand how many hearts you have. The downside to maximising HP though, is the fact it costs 999 orbs. As for the actual controls, you run with the left joystick, fire with B and can jump with A or B.

In the event you press ­+, the pause screen will bring up the shop and by selecting map, you will then be asked if you want to return to the world map, which is handy if a current level is giving you issues, but you will have to start your current level from scratch, the next time you play it.

As for what happens when all your hearts are depleted, you will respawn at the last checkpoint you reached, but if you die, you will have to start the level from scratch should you choose to continue.

For the most part, Classic and Adventure modes are the same. They have the same levels, same bosses and same content. They even have the same golden collectables to acquire. Where they differ however, is the fact in Adventure, players are free to take on any level they want, in any order they wish, whereas with Classic, levels are more linear and require completion to move on to the next one.

Personally, Adventure takes my preference as I like the freedom it offers and the fact the game has three available difficulties for the players who like it hard, or easy. Just in case those two modes aren’t enough however, there are two other modes worth going over, as both are exclusive to the Switch release of Venture Kid.

The first is Survival, a mode where players get a single life and must try to overcome all manner of enemies and traverse randomly selected sections. There’s no real reward for this mode other than the feeling of gratification for doing the best you can and by earning certain achievements. As for the other mode, it is a Boss Rush mode and must be unlocked in order to experience it.

Lastly, there are the collectibles. On the subject of achievements, four can be earned just by clearing all sections in Survival mode, there are 37 achievements in total and for the completionist, they help to add further reply value to the game, especially since one achievement requires players to beat the game in under 45 minutes.

Then there are the golden collectibles called treasures. Each level has one, but in order to find them, you will have to be willing to seek out every route and discover the secret areas in which they’re located in. Once found however, your game will be saved and you will be required to find them in both Classic and Adventure mode.

In keeping with its Mega Man inspiration, Venture Kid features an 8-bit aesthetic that has me feeling a little torn. While I’m a fan of most character designs, the backgrounds and the level layouts, there are some designs that I wish could have seen some care to enhance the finished look.

The character with the worst design is Andy, the protagonist you play as and when I first saw an extra life for him, at first glance, I thought I was looking at a monkey.

Of course, I could be a little critical here, but Andy’s leaves me underwhelmed and since he’s the character we see the most, he looks a little out of place compared to the majority of villains and bosses encounterable in-game.

As far as any complaints I have with regards to Venture Kid goes, it would have to be the bosses, as boss difficulty feels a little over the place. Some are a little too easy and others, especially on the harder difficulties, can come across as being a little too much, too soon.

Talking of difficulty, Venture Kid is one of those games where situational awareness can be a necessity. Running in blind will only get you so far, so even though you can speed-run this game, sometimes the best thing you can do, is to take it slow and proceed with caution.

With regards to pricing, while it is true Venture Kid is available from $4.99 on the App Store and $10.00 on Switch, you’re only actually paying 1 cent more than the Steam version and you’re getting more content. Plus, because of the portability of the Nintendo Switch, this is the first time the game can both be played on the go, or at home on a TV.

Sure, the same can be said for most games on Switch, but Venture Kid on Switch is the best version released so far and its support of the Pro Controller is a delight that helps allow for more precision.

Venture Kid is a welcomed throwback to the classic NES games most of us know and love, only this time around, you can beat it over the course of a weekend and still have time for other activities.