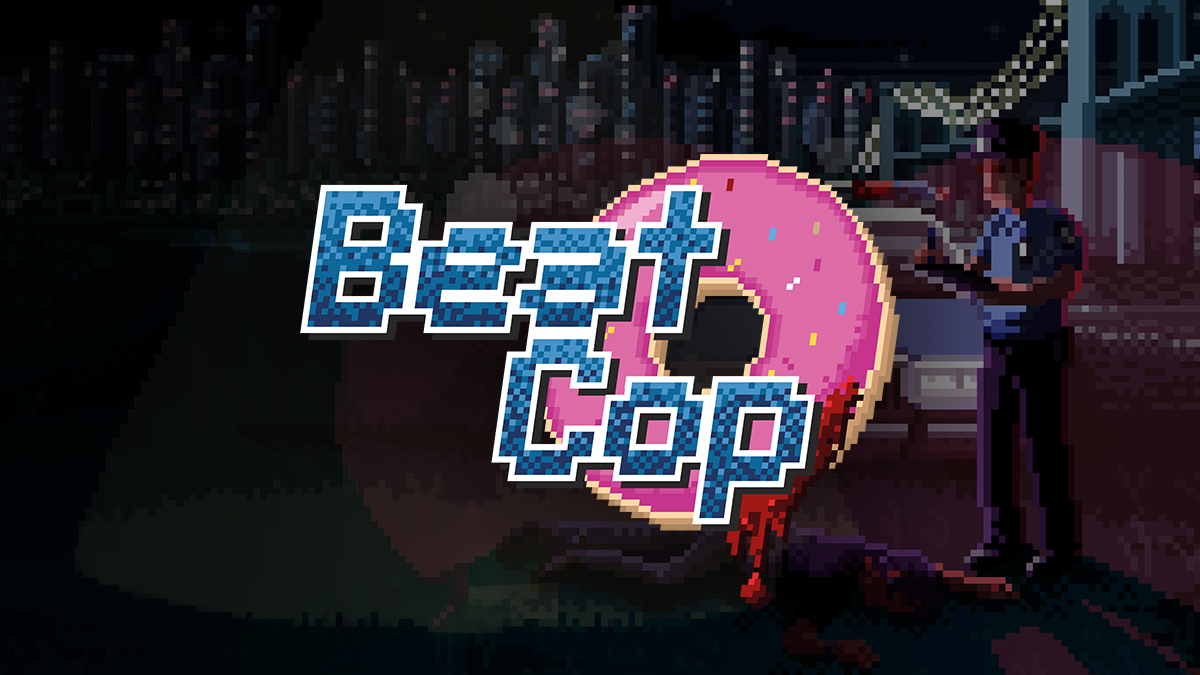 Arrest, protest and resist while experiencing the best 80’s cop show of your life with Beat Cop!

When I was growing up, my parents used to let me watch some old 1980’s era cop shows that they had recorded, since then, I had always had a fascination with shows like this, and with the resurgence of those shows more recently with the likes of Brooklyn 99, I was excited when I heard that the 80’s inspired Cop Simulator, Beat Cop was arriving onto Switch.

It only took a matter of minutes before the dialogue, characters, graphics, gameplay and charm glued me to my Switch for hours on end. Beat Cop plays a lot of notes, and all of them seem to hit just the right mark, encouraging me to come back and play it time after time.

Beat Cop’s main premise is its sense of non-linearity. Everything you do in the game has a consequence and it’s up to the player how they decide to approach a situation. Sure, you could be a good guy and abide by the law while walking up and down the beat on your patrols… or alternatively, you could take the badass no-good full-of-himself cop akin to the protagonists of those old eighties shows.

It was this sense of choice and openness that really had me craving another go at the game and with the genius micromanagement systems in place, I really felt like I was a cop and that I was in control.

Beat Cop’s gameplay reminded me a lot of Papers, Please – another game I really enjoyed back in 2013. You play as a cop and it’s your job to patrol the beat every day, inspecting cars, handing out tickets, responding to radio calls, capturing bad guys and doing jobs for the local shops.

Along with these many things to do, there is still an overarching story with your character solving a case to keep him out of trouble. It sets a very unique theme with a lot of enjoyable moments, whether they have a genuinely serious undertone or a more humorous approach to dialogue.

You’ll spend each in-game day doing a multitude of pre-determined chores set by your sergeant. Whether this is give out X amount of tickets or investigate a shady guy reported by the local liquor store, your main goals will be given at the start of the day and as long as they’re tended to, you’re good to go for the next day.

However, while doing these chores, you may come across NPCs needing help finding their lost cat, you might get called to help tow away cars that are blocking hydrants or even helping the Mafia find out which one of their colleagues has been stashing away the drugs for themselves.

These side missions are where the fun comes in – because you have a limited time during the day, balancing these side missions to earn reputation and cash alongside your usual duties becomes a matter of management and stress and gave me a feeling akin to that of Papers, Please, where you’d have to remember to do certain things before the end of the day.

Not to worry though, as Beat Cop is a lot more lenient and writes all of your chores you accept down in a notepad, checking them off as you complete them. Personally, I avoided this and tended to try and remember them as an added challenge, but this once again adds to the freedom that this game provides to the player.

Beat Cop’s reputation system was and still is fascinating to me. Basically, there are four main reputation bars, People, Police, Mafia and Crew. Letting people off their tickets or helping people out can earn you a heavy boost in the People rep, but declining bribes or ignoring cries for help can hinder this.

Police rep boosts by responding to radio calls and completing tickets and set chores given by the sergeant and Mafia and Crew are increased and decreased by helping the designated team. Leaning more towards helping out the Mafia may be a benefit in terms of information on your case, but then your reputation with the Crew will go down resulting in them being a lot more hostile on the streets.

You can save up money to get certain NPCs to help lower or higher these reps, but that money is needed for the multiple endings or to pay alimony and other fees needed to progress in the game, hence why you might feel obliged to take the bribe from a citizen wanting to get rid of their ticket – but what if the police have an undercover agent watching you? How will that impact the game? What will happen if I do this?

These are the questions I asked myself during the game and this simple domino effect gave me a sort of paranoia feeling when I knew I was doing something I wasn’t meant to do, once again increasing the stress and addictiveness to the game.

Beat Cop, for a menu-heavy game, is surprisingly simple to control on the Switch and the port feels comfortable, smooth and fresh all the way through. The control scheme is natural, as the top buttons on your Switch access the hotbar of gadgets (such as handcuffs, guns, radio, notepad and so on).

This allows you to easily switch from gadget to gadget with ease and without having to lift a finger off the face buttons. While the game isn’t all that intense, control-wise, it’s always nice to have an intuitive control scheme seeing as you’ll be accessing a lot of these options often.

Beat Cop’s music is an incredible fit for the game. Using synth heavy yet usually 8-bit music reminded me a lot of the theme songs of the cop shows i’d see from the eighties and the atmosphere and sounds of the bustling streets were great for setting the mood and had me truly immersed in this roll of a crooked cop.

Each car, each radio, each phone call felt smooth and fitting and the sound design did an overall great job of giving a real sense of simulating the feeling of being sucked into one of those shows.

The visuals that Beat Cop packs is charming to all ends. The pixel art is astoundingly done and the theme and vibe that the whole environment gives off is urban, busy, vibrant and accurate to what you would want out of a game in the 80’s action cop genre. I found myself having a chuckle at some of the sprites, as limitations in pixel art can often prove challenging, but nothing was ugly.

Every building was instantly recognisable, people were unique, cars were unique and the environment was just generally well-put together. I enjoyed the tone and vibe that this game gave off, and it felt that it was partially due to the pixel-art aesthetic.

In the end, Beat Cop is a repetitive action simulation cop management game – however, it is awesome at combining the best of the best of these genres and I found myself being addicted to its endings, gameplay and chuckle-inducing dialogue. It is heavily story and character driven, and is extremely reliant on repetitive actions, but that’s what a game in this genre is all about and if this is the closest we will get to Papers, Please in a long time (in terms of general gameplay) then Beat Cop is anything but satisfactory – rather, exemplary.

It stands on its own as a small underlooked, unique indie game that is worth more praise than it’s given. Definitely give it a go if you’re into the genre or you’ve always fantasised to role-play as a crooked off-the-wall cop, as that is where the fun lies.