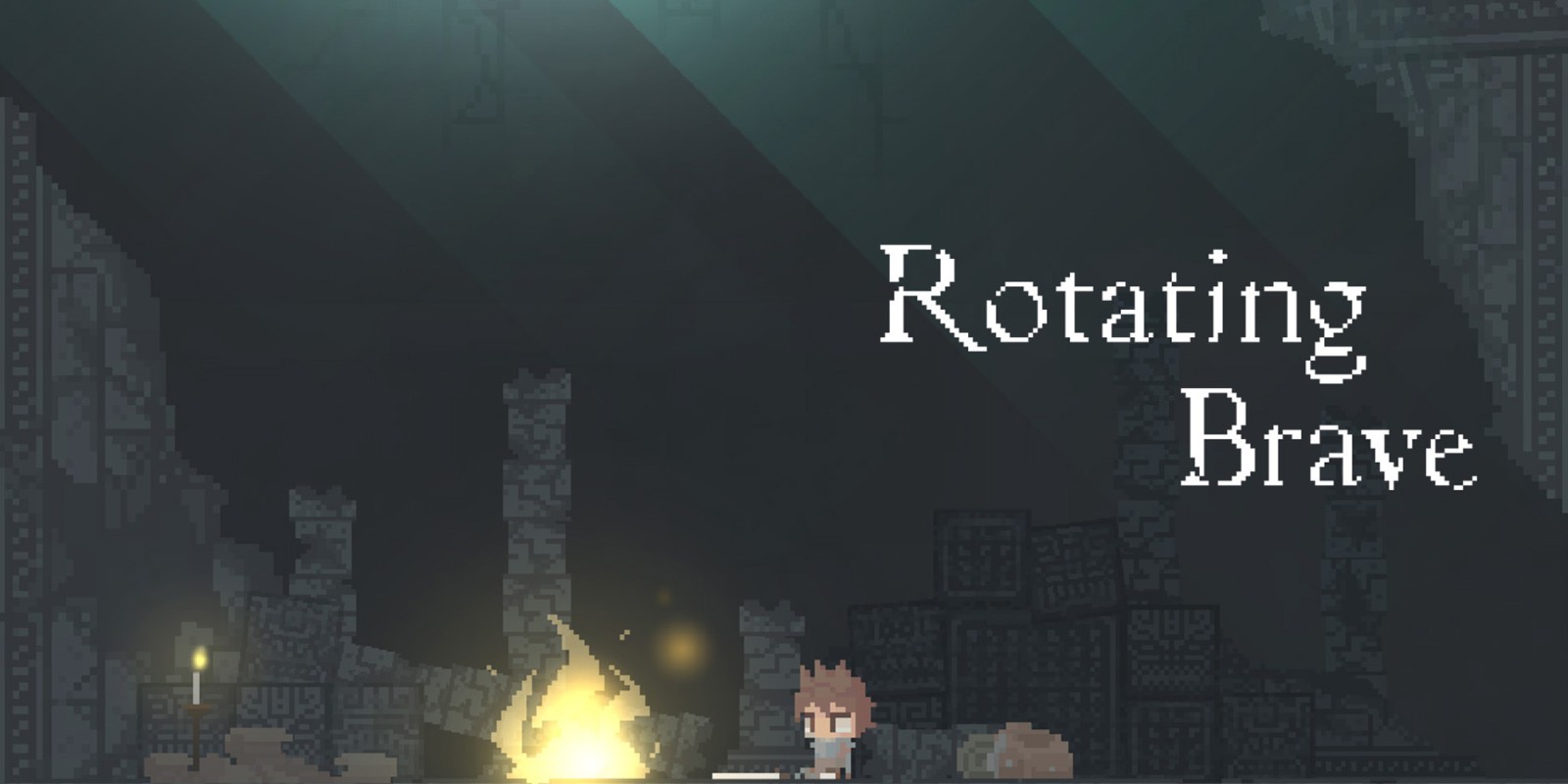 Rotating into your heart, or back to your phone?

With the Nintendo Switch’s portable side of the hybrid formula and touchscreen controls, mobile phone/tablet game ports were an inevitability, and Rotating Brave is possibly the most ambitious iteration of that obvious idea. Whenever a new platform is made available to an audience, there will always be a developer out there looking to take advantage of the new hardware in the most creative ways possible. With the advent of the modern smartphone, much of this innovation centered around the touchscreen and gyroscopic controls.

Another interesting take on what we could now experience with games was toying with the landscape and portrait modes and how that could be integrated into a new experience. While Rotating Brave doesn’t take into account gyroscopic controls, it does go for the former and latter. When found on Android and iPhone, the game utilizes the touch-screen for its button interface, and includes those in the Nintendo Switch port, plus expands upon them with the Joy-Con buttons.

You will find yourself fighting and platforming through a rogue-lite hack n slash experience while turning your Nintendo Switch between different orientations. To cut back on the disorientation that could be associated with this switching of perspectives, the developer has ensured a more pleasant experience by limiting the turning of the Nintendo Switch to taking place in between levels.

While you can use the Joy-Con (and Pro Controller) buttons to jump and attack, you can also detach the Joy-Con and play it in tablet mode to make it feel just like the original. Many ports of indie games that were originally developed for mobile that use touch-screen controls prevent you from playing when docked, but oddly enough, Rotating Brave doesn’t lock you out of playing on the television. This leads to an unintended extra challenging mode for the most hardcore where you can play the game on your big screen as you rotate your body around the couch and adjust the controller accordingly to navigate your way through the labyrinth.

Rotating Brave is a rogue-lite action platformer. You wake up as the main character with two backpacks by you – one to your left that shows skills you can unlock, and one to the right that gives you the choice between 3 upgrades that you can purchase and apply to your current run. Each upgrade costs 1 coin for the first, and 2 for the second (your default start is 3 coins), so you can choose up to two upgrades.

These upgrades could include health regeneration, extra money, or extra max health. You then descend into a free fall down a vertical cavern until you hit an enemy or platform-placement of each being randomly generated every time that you begin a new run. You can chain combo attacks off of enemies, as long as you can keep spinning and moving down/forward and holding down your attack button (whatever it happens to be at the moment depending on your orientation).

After you charge up your special meter enough with enough successful attacks, you can then unleash your skill to do maximum damage. My favorite was dependent upon which screen orientation I was currently playing through. Default skill is a blast of energy that travels below/in front of you. As you slay more enemies and make it further into the game, you will unlock new abilities (that you can check your progress to at the skill selection backpack at the beginning of the run).

All currency that you collect in any given run can be spent in shops that are randomly placed in levels. These shops contain similar upgrades to those found at the beginning of the level, but at a different price. Currency and coins can be carried over from one run to the next, so you can choose to ignore the shops or upgrades on any given run. In addition to these shops, you might also stumble across randomly placed memory caverns.

These memory caverns show you a slideshow of memories with a former loved one, and restores your health before you return to the level at hand. These sometimes easy to miss caverns are highlighted by a hole in the wall and a cone of light emanating from them to indicate their location. These are a lot easier to miss in vertical levels while you’re in free fall. Unfortunately, it often happens that the cavern happens in the middle of a free fall section without platforms to hop on to get back there, so you just have to be lucky enough to be falling on the proper side of the screen and react quickly enough to their appearance to get in there. Since their usage isn’t 100% necessary, it isn’t a huge detriment, but an oversight that could have been corrected.

Rotating Brave uses a very simple art style that makes everything pop against the dark background and makes it easy to distinguish where you can and cannot go, and enemies are always easily visible. Controls on the attack feel a little inconsistent, as sometimes you hold down your spin attack and can bounce between 5-6 enemies without taking damage, and other times it seems as though the spin attack ends after the third enemy and you end up taking a point of damage as a result.

There is one upgrade you can purchase that will kill all enemies on screen when you take damage, so sometimes this inconsistency can be helpful, but more often than not it leads to a frustrating game of trying to switch between your spin attack, jumping to avoid enemies, and waiting to hit another enemy so that you time your skill attack for maximum effectiveness. You only start with three hit points, so the longer you can avoid taking any damage, the better.

The back of the screen chases you, and if you fall into it on a vertical stage you will die. On side-scrolling stages, it just prevents you from going too far backwards. Despite these frustrations, Rotating Brave is a lot of fun to play, and starting a new run immediately after death is easy to do because the gameplay is genuinely fun.

A lot has been made of Rotating Brave’s defining mechanic- that of manually changing the orientation of your Nintendo Switch console to properly match up with the perspective on screen. This is absolutely the most important thing about the game to keep in mind. Playing the game with Joy-Con attached is the best means of controlling the game, but the exchange between vertical and horizontal between levels leads to hand/wrist cramping and fatigue very quickly- I’m talking five minutes or so.

You can mitigate this problem a little by taking off the Joy-Con and playing in tablet mode, but then you have the issue of controlling directions onscreen with the touchscreen, which is spotty at best- even on mobile phones and tablets. Even then, the Nintendo Switch is noticeably heavier than phones and tablets, so fatigue still comes. I think the ideal way to play the game is to drop the Joy-Con and rotate the Nintendo Switch around on a stand while you play with a Pro Controller.

Rotating Brave itself is a very fun, and enjoyable rogue-lite action platformer. The novel approach it takes to rotating the device it is on to keep the gameplay fresh a bit longer than it would if all levels were horizontal is well executed. The combat is fun, and the platforming is pretty on-point. Unfortunately, this same strength is also its biggest weakness on the Nintendo Switch itself.

So, while I would recommend playing Rotating Brave on your smartphone, I think it stands as a good example of why some games are better off left on their original platform. If you don’t mind the tedious task of repositioning your Switch on a decent stand (if you even have one), then give it a shot.