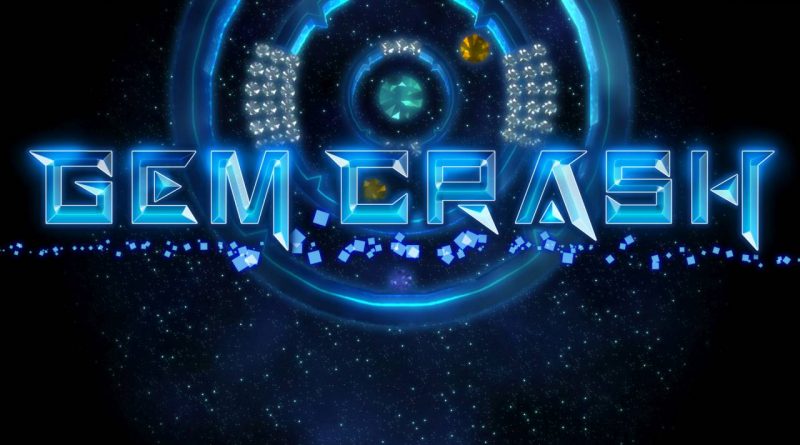 Puzzle games are always a fun way to pass the time, and it’s even better if the games are a good challenge. GEM CRASH encompasses both.

GEM CRASH is an interesting concept for a puzzle game. However, we were slightly confused by it when we first began playing.

GEM CRASH is a game with a simple premise. It’s a brick breaker with the stage being constructed of rings of barriers and gems to break with your ball.

Your job is to rotate the stage around and around in an attempt to control the ball as best as you can. You need to break the gems for points. The goal is to shatter as many gems as possible throughout the level and more will appear the longer you play.

There is what’s called a Prism Gem in the middle of the stage. If you hit it enough, you’ll go into Fever Mode, destroying the barriers in the stage to allow your ball to go crazy. During this time, if you break the middle gem, you’ll get bonus points as well as the possibility of more balls flying around on the stage.

When you collect a certain amount of points, you can “buy” items for the next level. My only complaint about this mechanic is that you need to buy the items every single time you want to use it. I had assumed once I bought an extra ball for 200 points, I’d always have an extra ball for the upcoming levels. Instead, I need to buy it every time I want to use it making it harder to save up points for other items.

The graphics of GEM CRASH are SHINY. They’re crisp and clean, with the sheen of the ball and gems giving the game a modern look. The colors are fairly muted and soft, allowing the speed of the game to be the focus.

I definitely love the graphics. The gems are pleasing to look at and super shiny and pretty, as Kris just said. It’s an attractive game and the colors are nice but dull enough to allow the main focus be on the gems.

The music wasn’t too bad either. It was fun to listen to, even if we felt that the tempo did not match the standard mode of the game. For us, the ball and controls were too slow for the music’s tempo until we bought a few speed boost upgrades for the ball.

While I didn’t mind the music, I felt as though it didn’t match the game play. It wasn’t until we got into fever mode that the music matched the game play.

GEM CRASH has plenty of levels to challenge yourself while you try to reach higher and higher scores. Trying different combinations of upgraded balls and items to try to beat the clock gives GEM CRASH a decent amount of replay value.

Overall, GEM CRASH isn’t a bad game. It’s relaxing enough and satisfying to shatter all the gems and collect those points. Watching multiple balls roll around the screen is a lot of fun as well. There’s always something more to do in this game as you unlock new items and trying to beat your own high score.