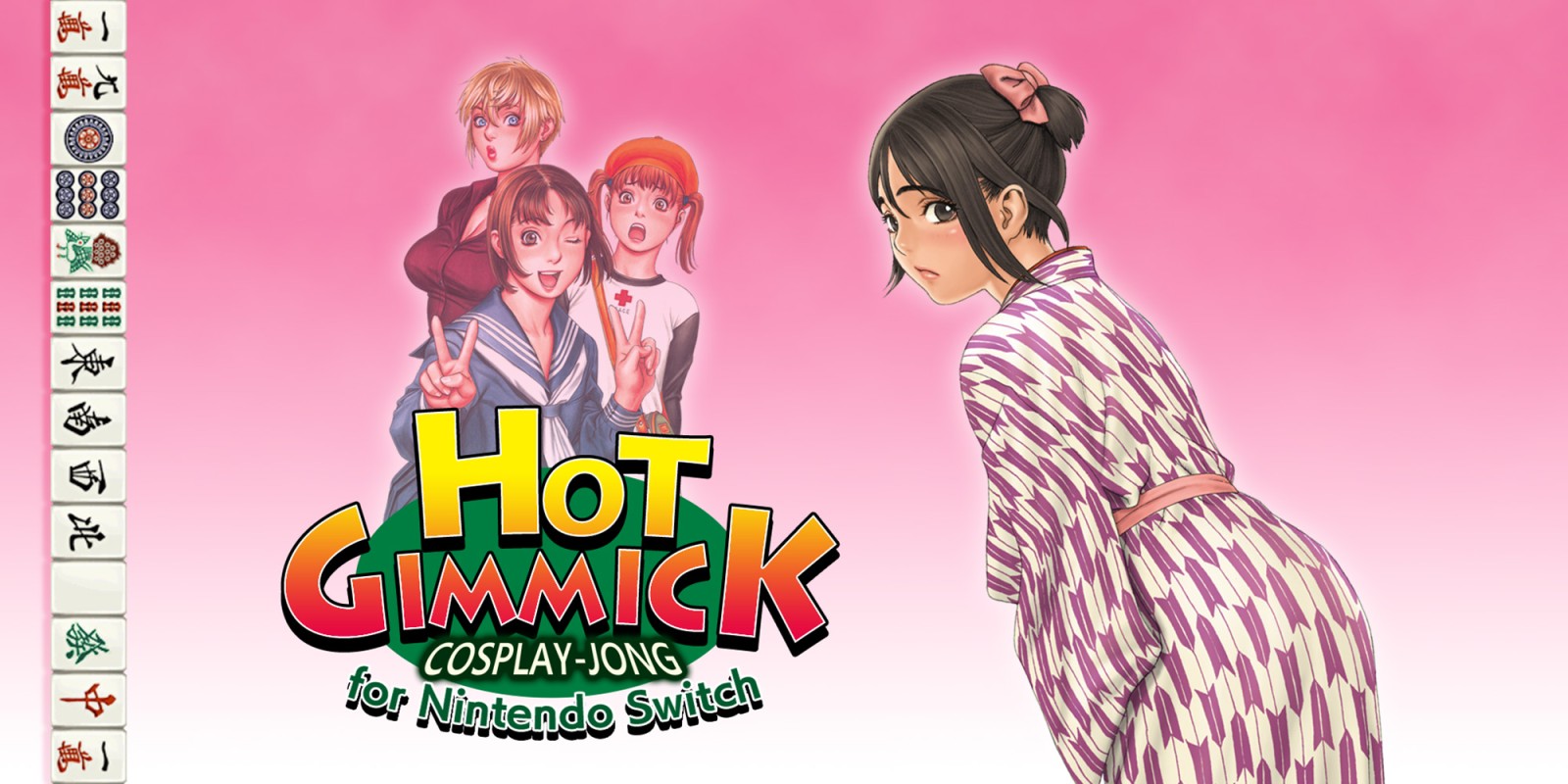 Zerodiv has been on a roll since acquiring the rights to all of Psikyo’s past arcade titles, releasing port after port of their arcade library for Nintendo Switch. So far every one of these ports has been released in all regions, but given that mahjong is almost totally unknown to Westerners, I was certain the Taisen Hot Gimmick series would be an exception… to say nothing of its more “questionable” elements. Yet despite all odds, here we are with Hot Gimmick: Cosplay-Jong now available in the west for the first time, more than 20 years after its original release in Japanese arcades.

Hot Gimmick: Cosplay-Jong is split into two modes: Battle and Jong Fight. In Battle mode, the player meets several women that have committed some seriously heinous crimes, such as not wanting to eat a carrot or thinking Japan is lame. The only way to make them pay their debt to society is by thrashing them in a game of mahjong, and upon besting each girl the player will be given the option to punish them for their poor behavior. Choose to punish and a button mashing game will begin, allowing you to embarrass each girl by either removing portions of their clothes or forcing them to wear cosplay (of course, given that this game can be found on the Nintendo eShop and not in the back of a poorly-lit Adult Superstore, don’t expect anything too dirty).

If you don’t understand how to play mahjong, Hot Gimmick is not going to do anything to teach you. There is no in-game tutorial, and only a single page in the game’s seven-page manual is dedicated to giving you an (extremely poor) overview of how to play. It’s clear this is an arcade game that assumes the player already has a proficient knowledge of mahjong’s rules and game structure. I’d say it’s quite the misstep by Zerodiv not to include some form of in-depth mahjong manual as part of the game’s localization, but to call this a localization would be far too generous.

Almost every sentence the characters speak is grammatically incorrect and/or filled with spelling errors. I would not at all be surprised to discover that the dev team just ran the game’s script through Google Translate and called it a day. Thankfully, this only serves to add some unintentional hilarity to an already pretty hilarious game.

Since we’ve established that you’ll have to have at least a cursory understanding of mahjong to enjoy this game, here’s a basic summary. Mahjong is a game played with 144 tiles. At the beginning of the game, each player is dealt 13 tiles. Each turn players draw and discard tiles until they can form a hand of 14 tiles consisting of 4 melds and a pair. There are also special hands that can be created depending on both the construction of the hand and how the tiles used in that hand were obtained.

The game has a system that allows players to steal tiles that their opponent has discarded and use them to build their hand. Note, however, that some Yaku (special requirements for the hand to be considered legitimate) cannot be achieved when a hand is not concealed, as any tiles used to form a meld from a stolen tile can be seen by the opponent. The goal of the game is to construct the most valuable legal hand possible, all the while watching the discards of the opponent as well as making sure not to discard a tile that deals into the opponent’s hand.

Mahjong is traditionally played with three to four players, but Hot Gimmick consists of entirely one-on-one duels that play about the same. The mahjong gameplay is solid, if a bit dated. More modern digital mahjong games have taken some of the stress out of the game by alerting you any time a tile can be stolen from an opponent, as well as when the player’s hand is one tile away from being complete and can call richii (spelled “Reach” in Hot Gimmick‘s wonderful translation). A situation where the player can bet a stick worth 1000 points that they will either draw or steal the tile required to finish their hand. Once richii is called the player is locked into the hand construction they currently have and must obtain the one appropriate tile needed to finish their hand) tsumo (when the player completes their hand on a tile draw) or ron (when the player completes their hand by stealing the tile of their opponent).

Annoyingly, Hot Gimmick requires you to pay attention and press the X button to bring up a menu to perform these actions yourself at the appropriate time. I was so used to the convenience of having those options available to me automatically that for a while I was convinced that the game used some obscure style of play that contained no tile stealing or richii calling. It certainly doesn’t help that the manual makes no mention of this, just saying that the X button “Brings Up Menu”. If even an experienced player like me only figured this out by chance, players still learning the ins and outs of mahjong are in for one wild ride.

After a Battle mode match, Jong Points gained through drawing specific tiles can be used to purchase a number of bonuses. These include being able to discard any tiles from the starting hand and replacing them with new random tiles, as well as several different types of tsumi komi (starts the player with a hand already close to a legal hand and gives the player tile draws favorable to finishing that hand. The value of the hand provided depends on the amount of Jong Points spent on the tsumi komi). These tsumi komi come in handy, especially when facing later opponents that always seek to form very valuable hands to knock the player out in one round.

The visuals of Hot Gimmick are pretty good. The realistic anime artwork by doujinshi artist Jun Tsukasa has aged well despite being over 20 years old, and the game’s wrestling red and blue fighters in Jong Fight exude a silly Japanese charm. The game contains a gallery where you can view the art from each character’s punishments in Battle mode, as well as the wrestling moves in Jong Fight as you unlock them. It provides the game with some much-needed replay value as you work to unlock more artwork and animations.

The game’s tiles are large enough to be identified even when sitting far away from the TV screen, something more mahjong games should emulate. There’s also a dog companion that follows you throughout the game and performs various silly animations, such as sleeping on a futon, drinking tea, and tapping the player’s tiles with a magic wand when a tsumi komi is activated. The generic upbeat music on the other hand, is not quite as memorable – you won’t be reaching for the mute button, but you won’t be cranking up the volume either.

Aside from an utterly nonsensical translation and lack of quality of life features found in more modern mahjong games, Hot Gimmick: Cosplay-jong is a solid mahjong game with great artwork and loads of ridiculous and/or racy animations.