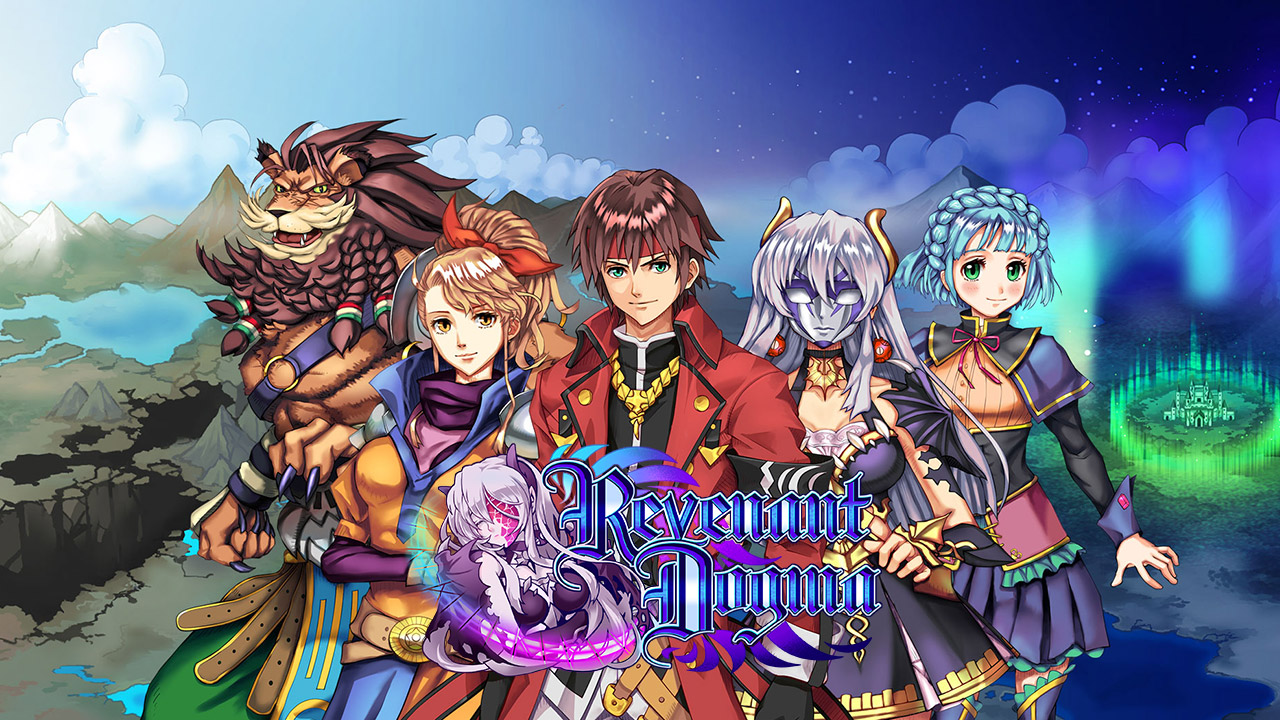 The Revenants have returned.

Having already released the likes of Revenant Saga on the Nintendo Switch last year, EXE-CREATE and KEMCO are right back at it with another RPG that carries the “Revenant,” but despite the number of similarities the two games share, there is also a huge difference between Revenant Saga and Revenant Dogma and for some, the differences could be its undoing.

So, before we dive into the how the game handles, first up, let’s talk about the connections the games share, the similarities and the differences and we’re going to start with Revenants. In Saga, which was actually released first, Revenants are straight up bad guys that are souls of demons that possess dead bodies.

In Dogma however, Revenants are divine warriors that started out as normal warriors on the side of good, who have been blessed with holy powers. Also, although Dogma is classified as being a spiritual successor/sequel to Saga, it is not required for you to have played Saga before playing Dogma.

Having said that, Saga does explain the whole Revenant thing a lot better. Not to mention the fact a familiar face from Saga does pop up in Dogma, but even then, their presence is not as impactful as it could have been. Furthermore, despite Dogma featuring things like similar assets, such as graphics and soundtrack, it is a different game in its own right.

It features a different ensemble of characters, a couple of improved features, a transformation system and an entirely different setting, which we’re going to get into now. Behold Aldora, a world where two races (humans and therians,) attempt to coexist. Each race has their own gods they believe in and for a long time, both races were able to live long happy lives without the other meddling in their affairs, but this would not last.

Scales were tipped and chaos would soon make its mark on Aldora, but there’s more to than just that. With Premier Dverg acting as the leader of the therians, their race was granted divine powers from the Feral gods they worshiped and they soon become the superior race.

Naturally, the human race resented the therians for this and that resentment worsened when they did not receive any blessings from their Holy gods. Faith in the Holy gods then began to falter and just as things looked like they couldn’t get any worse, a human priest named Lionel, took it upon himself to research the divine and tip the scales into humanity’s favour. Before you know it, the Revenant Corps was founded and Revenants were brought back into the fold.

Enter Caine and Julie, two members of the Revenant Corps who are looked down upon, due to being failures as neither were able to become Revenants. When all is said and done with the prologue, it is these two players are first introduced to and control, during their search for a Feral Relic in therian territory.

Only, they’ll find more than what they bargained for and within one hour of playing, 2 more protagonists will join their team with the first being a masked girl called Lilith, and the other being Fleon the therian.

As you would expect, tensions are strife between Fleon and the humans in his company, but when Caine proves himself able to use Feral Relics and an evil plot is discovered, there are plenty of other things for Fleon to be focusing his attention on.

Compared to some of the other RPGs developed by EXE-CREATE, Revenant Saga is a “darker” instalment, only like the developer’s other offerings, it’s still filled with the cheesy dialogue, awkward conversations and hanging out by campfires. So, despite the darker story, it’s still pretty light and what you see, is what you get.

Now, much like with Saga, Dogma is a 2D RPG when exploring its overworld, but as soon as you trigger a battle, 2D gets replaced with 3D graphics and players can then choose to control themselves, or leave to auto (press X.)

Just because you can use auto your way to victory though it doesn’t mean you should always rely on it, since it’s not as reliable as it could be when fighting giant monsters, metal monsters, or most monsters on the game’s harder difficulties. Plus, if you do opt to do everything yourself, you will be able to use a variety of skills, or activate a transformation (Knight, Guardian, Healer, Paladin,) for increased stats and more powerful attacks.

There is a downside to the transformations though, since there is a limiter gauge and when it reaches 100%, the transformed character will then enter a berserk state. There are however items that can be used to reduce the limiter. Also, during the battles,  you will have the open of activating bursts when a gauge appears and pressing A before the gauge disappears.

Successfully activating it will allow up to three skills to be administered, but that’s entirely random, so there can be instances where only one or two will be used. Lastly, on top of winning EXP by winning battles, as well as gold and the occasional item, for every third consecutive win, players can earn RDP (Revenant Dogma Points,) which is a special currency, much like Toy Weapons that can be traded in via a special in-game store for rare items.

In the event you choose to activate Battle Shortcuts though, so you don’t have to fight any enemies who are far weaker than your team, causing those battles to result in instant victories, you will not earn RDP, but you can complete the game without getting any of the rarer weapons.

If at any point you feel the battles are getting a little too hard for you, you can always lower the difficulty, as well as press L when in the overworld to fully replenish your HP and SP. Or you can press X, to bring up the game’s menu screen and make sure you’ve equipped all the best arsenal your characters can possess, improve your weapons and boost their stats.

Also from that menu, you can check on the status of your current main quests, as well as get a reminder on any of the game’s 15 sub-quests that you’ve decided to take on. If you’re feeling lost however, from the overworld, you can always press Y to bring up the map and have fun clearing the blurry squares to properly reveal everything and see an indicator of where you should be heading toward.

The map is also a great means of teleporting to other areas you have visited, but when in dungeons, you will need to make sure you activate Warp Sigil so you can warp between the entrance, midpoint and end. In the event you see a Restoration Sigil, not only can you rest up (not like you’ll ever need to,) but it also acts as a good indication of an impending boss battle.

One other thing you’ll notice in the dungeons are the treasure chests. The fancy blue ones can only ever be opened once and have a set position, but the other ones, which are plainer in appearance, are Spirited Chests. Spirited chests will reappear when you enter a dungeon and appear in different places, as well as home a new item.

In terms of content, although you can breeze through the main game on Easy, in under 11 hours, there is some post-content in the form of an additional dungeon and final boss battle that can result in three different endings. There is also Ethereal Est, a mystical world that players can access via wormhole-like portals that can be found in towns and villages.

This world has four different dungeons for players to explore, with one being the easiest of them all and the others being considerably harder, especially the Hell dungeon. High risk comes with high reward though as on top of deadly foes, these dungeons will also allow players to collect very powerful and rare items, but you can only take one out at a time. The others will need to be sent off with a courier and taken to the surface for you.

As nice as it is to have this extra thing to do, unless you fall completely head over heels for Revenant Dogma, these extra feature does feel unnecessary, because as tempting as it is to get every character to the max level of 999 and get the better weapons, the extra local has nothing to offer the main story or the characters, resulting in it being nothing more than just a total grind fest.

I’m not saying you shouldn’t sink 50 hours into exploring the extra dungeons, which alter every time you play through them, but between choosing to spend 50 hours into Dogma, or start playing another RPG game, personally, I’ll be moving on to the next game or backtracking my way to Torna, since I still can’t get enough of it. Ultimately though, as always, the choice is yours and yours alone.

This may come across as being biased, but even though Dogma is the improved version, Dogma is the better Revenant game. Sure it improved upon a number of features, making them easier and smoother, but more could have been done to improve upon, to have make Dogma stand out to the same extent Saga does. It’s also a game that can be downloaded in all its entirety, for free on mobile devices, where it actually handles rather nicely, but this fact does make a mockery of the price-tag it carries on Switch, especially when the Switch includes additional content that can be purchased (items & the like.)

By no means is Revenant Dogma a bad game, but it does try a little too hard and the whole, as far as KEMCO and EXE-CREATE go, but it feels like one of their average RPGs, as opposed to one of their better ones.