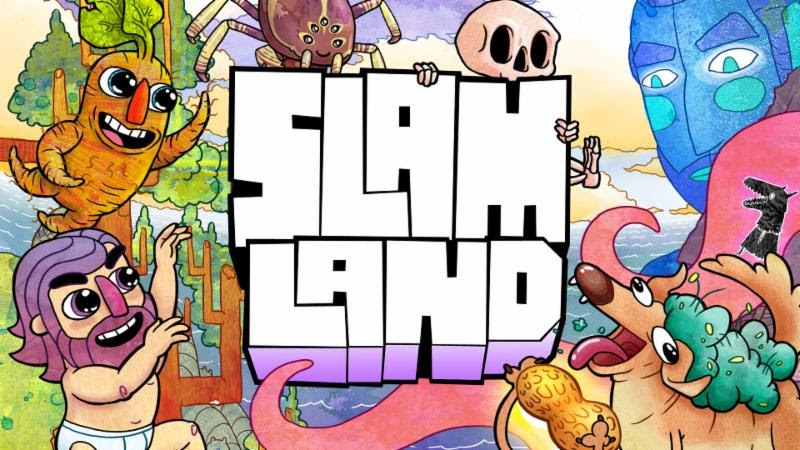 Let’s get ready to rumble!

Ever hear of a developer by the name of Bread Machine Games? They previously brought the rogue-like Deathstate to Steam and PlayStation 4 and now, they’re all set to release their second title and it couldn’t be any more different.

Instead of being a game that supports a colourful comic book-like art style, their newest offering for Steam, PlayStation 4 and Nintendo Switch, opts for a 2D Paper-Mario-like art style and goes by the name of SLAM LAND!

As for as genre goes, it is brawler that will allow up to 4 players to throw down one with another, except the emphasis really is on “throw down,” as the game is not about fighting, but slam-dunking your opponents and objects, into nets in the shapes of rings of golden light.

You can of course punch your opponents with X, but no damage will be sustained. What you are supposed to do is head over to your nearest opponent and press Y to grab them and then quickly dunk them. So, when you have someone in your hands, you’ll want to rush to your nearest net and jump into it, or press Y to throw them.

Throwing your enemies isn’t the most reliable way to score points as they can squirm and escape, not to mention you can only hold onto them for so long, but if you leap, or double jump into the air with either the B or A button, and grab someone, an arrow will appear, so as to show you where your opponent would go if you throw them. In the event you are the one whom someone is trying to grab, you can either punch or opposition to keep them at bay, or use L and/or R, to dodge.

As far as SLAM LAND is concerned, there is no story and story mode, but there is a giant blue entity who is looking to be impressed and there are 5 gameplay modes for players to enjoy. One is Quick Slam, which is a regular battle that can be against friends or CPU and be either a Stock or a Timed battle, depending on your preference.

There’s also Peanut mode which is just like Quick Slam, except instead of dunking each other, the aim is to grab a Peanut and dunk that. The longer the peanut is in play, the more points that can be scored when it’s eventually docked. Peanut mode matches are timed battles only, but players can set how many rounds they wish to play, between 1 and 5, which can last between 30 seconds and 5 minutes.

Another mode for players to enjoy is Horse. It’s very similar to Peanut except, instead of players having to contend with peanuts, letters spelling out the word “Horse” will appear one at a time. By dunking the letters, players can score points, and the first one to spell horse will win the round.

But because only one letter appears at a time, if you’re holding out for an O and it’s the last letter your opponent needs to win, your only option is to throw the O off map and hope the next letter that appears, is the one you need. If it’s not, just keep throwing letters off the stage until the one you need appears.

Just in case Horse doesn’t take your fancy, there is also a Trash mode, which is very similar to peanut, except peanuts are replaced by bags of trash and players can pick up more than one at a time, and must dunk them to score points.

In the event that a player grabs another player who is holding trash bags, a horse letter, or peanut and dunks them, they will receive a multiplier and get more points and in case it’s not obvious, when playing multiple rounds, the player with the most points at the end, is the overall winner.

Just in case those 4 modes covered above, don’t have enough variety, they do share the same 10 playable levels and on top of 5 character types (Human, Spoder, Mold Dog, Toober and Skelly,) each character type does have 4 different versions, but that is the extent of the variety, unless you want to add the final mode, Slam Tour.

Slam Tour is exactly what it sounds like, provided you’re not expecting a mode that will have you endure a battle on each of the game’s 10 levels. Instead, it is a game that will have you play 5 rounds consisting of games related to other modes, such as Peanut and Trash.

Players are not permitted to tweak settings such as match type and rounds, but they can choose to include CPU and set CPU’s difficulty as well as setting each round duration. So unfortunately, although Slam Tour could have been the icing on the cake, simply isn’t. The sad truth about SLAM LAND, is the fact that it is not for everyone. Sure, some fun awaits, but it does feel like this game will only apply to a small audience of gamers and if you can’t get into it and its gameplay, then the fact is SLAM LAND will have nothing to offer you and unfortunately that is the case for me and 2 of the other Miketendo64 team members I roped in to play SLAM LAND with me.

If you are looking for an indie alternative to Super Smash Bros. Ultimate, because you just can’t wait until December and you’re not interested in Brawlout, you will not find what you’re looking for with SLAM LAND. There is little variety to it, it did not come across as being as fun as photos and videos showed it to be and above all, controls and movement felt a little over the place, which even for a sporty brawler, is never a good thing.