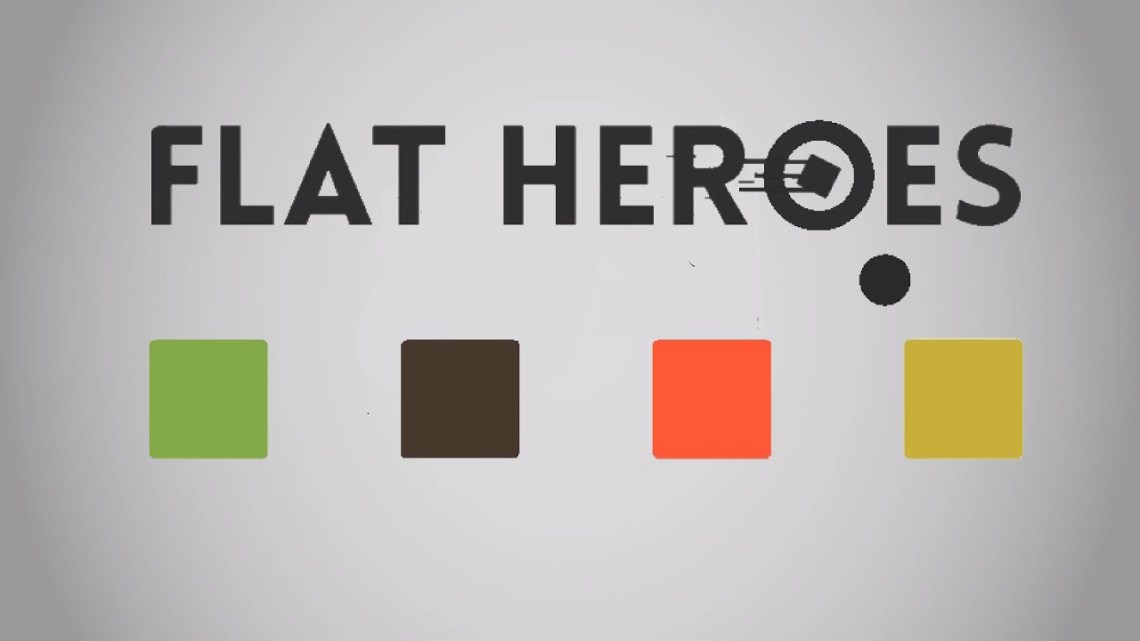 Flat Heroes, from developer Parallel Circles, didn’t interest me at first when I saw it on eShop. I immediately assumed I knew exactly how it would play. Thankfully, I was completely wrong about this experience with gameplay being anything but boring and the heroes as square being more than just…squares.

Since there is no story in Flat Heroes, so we can get to the thing that matters most: the gameplay and controls. You control a small colorful square that can roll and jump. The square can also stick to certain walls and can wall jump freely. Each level pits you against various projectiles that are out to destroy you and it’s simple task to survive. This may sound easy at first, but after a few rounds, you’ll find that it’s not. As you progress through the rounds the challenge ramps up nicely, and much in the same way as Super Meat Boy, some levels will have a very specific route and timings that must be spot-on in order to prevail.

When you do eventually guide your little square to victory there’s a real sense of achievement and upon a loss, you’re dropped instantly back into the action. This is very much appreciated for a game that requires a great deal of trial-and-error. As is the nature of these types of games though, it can get tedious when you get stuck on a stage and you know you have to get past it to get to the next area or boss.

As well as jumping and rolling, you can dash in any direction. This becomes essential for quickly moving out of harm’s way. Eventually, you unlock the pulse ability which knocks back or destroys certain enemies, of which there are a good variety with each having their own unique way of trying to kill you. Some will chase or dash at you, while others will form destructive lines or fire projectiles. The controls are intuitive and tight with everything feeling very responsive. The only issue I had was when sometimes I would dash without holding a direction on the analog stick and my square would go in the wrong direction leading to my untimely demise.

Flat Heroes features several stages spread across multiple worlds. At the end of each world, you face a boss fight and these are the same mechanic of just trying to survive, but in later boss fights you’ll have to go on the offensive as well. All the boss fights were excellently delivered and each was unique enough to really test your skills.

There is a survival mode and it offers of decent survival challenge to get the best possible time, but the real star of Flat Heroes is the co-op play. You can play through the entire experience in co-op with up to four players in total. Only one player has to survive to beat the level, so competition is still present while also being cooperative. I loved this mode and it was pleasantly surprising just how much of a solid single-player experience was also available.

Music and sound are inextricably tied to the on-screen action. The soundtrack is on point and the minimalistic aesthetic is complemented with a variety of bombastic tunes. The music often felt synced to the gameplay, however not quite to the same level as some other rhythm platformers available.

It still does an admirable job of making the gameplay feel exciting and the sound effects really added to the beauty happening on-screen. I was very impressed by how the sound effects were synced to the HD rumble, which is without a doubt some of the best I’ve experienced on the Nintendo Switch. The visuals are smooth and crisp, and add nothing unnecessary while keeping everything needed for fun and tight gameplay. Some may write Flat Heroes off based on the visuals, but that would be a huge mistake as I would much rather have this minimalistic approach.

Overall, Flat Heroes should already be described as a hidden indie gem, just based on the fact that it won’t interest very many players with screenshots alone. Don’t let the visuals fool you though, this is one deep and satisfying experience that was immense fun for my friends and I. If you like Super Meat Boy, co-op and survival gameplay, this will become your next obsession for a little while at least.