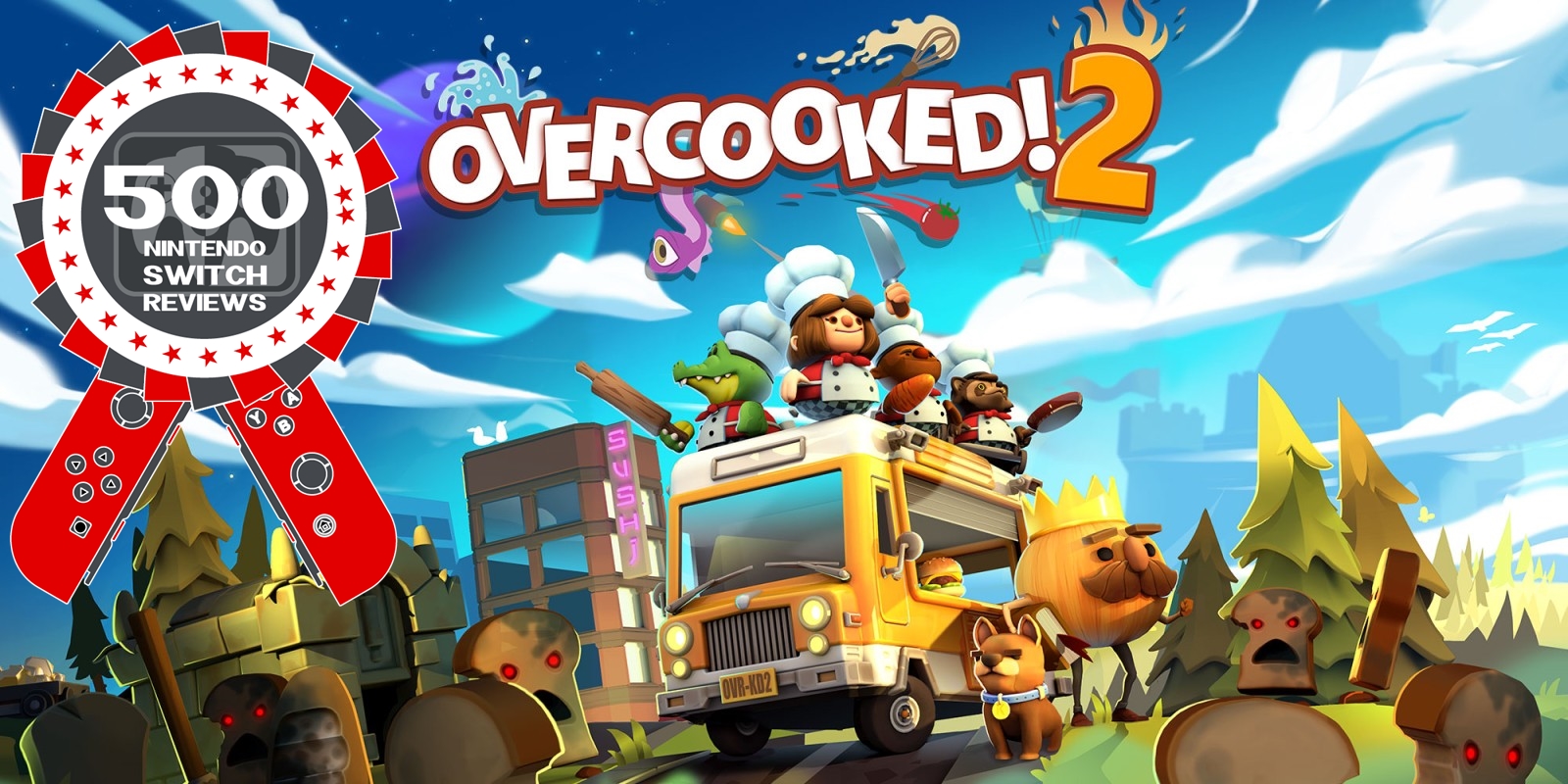 Can you smell what Ali is cooking? Our Overcooked! 2 review has been dished up and it’s time to serve it to you!

The cooking genre has been around for quite some time now, with classic games being brought up on this simple premise: chop food, grill food, place meal onto a plate, serve food, and repeat. The original Overcooked! was able to follow this simple formula and changed the genre with a frantic title built for all ages, but does its sequel bring enough to the plate to justify a purchase? It’s time to dig in!

Overcooked! 2 builds off the platform set by the original, however, it adds unique level types and offers a lot more than some people can chew. Cooking madness at its best is exactly how the game should be described, as it begins at a slow pace and quickly launches the player into scenarios never before seen. From a simple kitchen to a haunted house, there’s no telling where the game will take you next. The core gameplay remains the same from the last game, which works in its favor due to the original being one of the best indie titles of all time.

The whole map is connected, exactly how it was in the original game, where players use a van to travel from level to level. Each world follows a similar structure, with the final level ramping up the difficulty to increase cooperation between players. This time around, buttons have been placed around regions of the map, pressing these buttons will give the player access to otherwise unreachable areas to continue the journey. It wasn’t the most necessary addition, as it was just an extra step needed to gain access to the next stage.

The main objective is for players to fulfil meals given to them at the top of the screen, with players earning more points based on how quickly each meal is made. Tips can be earned for finishing meals quickly, increasing the total amount of points earned per level. Each level has a short timer, usually being around the three-minute mark. Perfecting many stages in a row gives players access to secret stages, these offer an additional challenge to the main game and are not necessary to be completed.

Meal types vary, as some take a few seconds to make while other require a ton of ingredients to complete. Each time a new recipe is given, the game will not start the timer until the meal has been turned in. This allows for a little exploit that allows for players to make tons of meals prior to the timer going off. From slicing shrimp to trying your hand at sushi, the game is full of unique ingredients and meals that add to the chaos.

Cleaning plates is also a necessity for the game since forgetting to clean a plate could ruin your chances of getting a last second order served. This allowed for the last few seconds to become the most crucial seconds of the entire level. From the outside it may seem like the difficulty wouldn’t be an issue, but getting a perfect three stars on each level is no easy task.

The game expects players to use each second to their advantage, which can at times be an annoyance while other times add to the enjoyment of the game. Levels are frantic and chaotic, especially if the player is playing with others. The game is built to be played with others, which is why playing in co-op is the main way to go. Single player play is doable but the game works much better as a cooperative title.

A brand new addition to the series is the ability to throw food items across the stage. This makes gameplay even more of a frenzy than it already is, with players tossing mushrooms from corner to corner filling the ground with all types of food. Players can even toss ingredients into pots and pans from one corner of the screen to another. Certain levels are built around the idea of tossing ingredients from one platform to another, and this feature seems to work very well. A distance meter will also show up when looking to throw foods, which allows throws to be timed for further accuracy.

Perhaps the biggest addition to the game and definitely the most requested addition from the original has to be the ability to play online with friends. Friends can join the story mode and aid in your quest to eliminate the un-bread or even join in on the arcade mode. Player connectivity is very straightforward and efficient, as one friend can host a session and the other simply has to search for a friend that is hosting. This process did not take long at all to set-up, and it is very surprising to see how well the mode works. Friends connect within seconds, however, in-game communication is non-existent. The only method of communication is through the generic emotes.

Although the Switch does not have a native voice chat system, a game like Fortnite is doing wonders with its own system that works well enough to chat with friends, but a game like Overcooked! 2 does need a chat system so that friends can work together to get meals done. The game was very difficult without a voice chat system, which is what lead me to use Discord instead. Playing the game while chatting made the game much more enjoyable, and it allowed for some hilarious moments to occur while going through levels. Communication is key in a game like this, which is where the game falls a bit flat.

Where there are ups, there are also downs, as the online mode lacks in its polish. There were several times where levels were unfinishable due to the game not allowing plates to be turned in. Other times the game would lock the characters in place, not allowing them to do anything. Freezing in place, speed problems, ingredients not appearing, and other glitches made for some oddball moments during online play.

Teamwork is what the game is built on and thankfully the online system works well enough to get the job done. Playing the story mode with friends from all over the world is a blast, and overlooking the issues gives players an enjoyable experience unlike anything available on the Switch eShop. Besides cruising through the story with friends, there is also the option to go head-to-head in versus mode.

Versus modes places two players against each other in a competition pitting chefs against one another. When only two players are available, each player must take control of two chefs. Juggling one character is hard enough, but tackling two adds to the excitement of the game. Having four players adds to the chaos, as teams can also be made when enough players are in the lobby. This mode provided a nice change of pace from the story mode all while adding a competitive flavor to the game.

To add to the pros of the game, performance wise the game runs extremely well when not including the online mode. Visually the game is nothing mind-blowing, but the cartoony feel of the characters and ingredients looks very crisp in handheld mode and while docked. Speaking of characters, back from the original game is the option to select your own chef. From the start is a diverse variety, but more start to appear as levels are beaten. Other animals and humans begin to appear, which adds a fun twist to continue playing.

Wireless play is also an option, which may be one of the better methods of play as the other players are in the same room. As mentioned before, the game is built on communication and teamwork, which is what makes this method of play one of the better choices. All modes of play are playable within Wireless play, with the same being said for the online mode. There isn’t much of a story within the game, but the main premise is gaining experience to clear the world of the un-bread, which is the food alternative to zombies. The pre-game tutorial explains this as well as the king explaining other plot points after a world is completed.

The music of the game isn’t fancy and doesn’t have large compositions, but they serve the cooking locations justice. Speaking of cooking locations, players can find themselves serving food on boats, hot air balloons, standard kitchens, haunted locations, mines, and so much more. The variety is clearly there, and what is there, is very fresh and enjoyable to play through.

Overcooked! 2 builds on what the original Overcooked! did in fun and frantic ways. By adding a chaotic online multiplayer mode that allows for the game to live on for a long time and by adding new level types, the game definitely feels like a great sequel to the original title. It may not have the most content to fully distinguish itself from the original, but it does enough differently that allowed for many enjoyable sessions to come from it. The story may not be strong, but the strong-suit about the game is the gameplay and it is extremely solid and fun to play. Teamwork is a strong selling point of the game, so having multiple people around to deliver meals would definitely be recommended but the game is playable alone. If you are in the mood for a fun game to play with friends for longer than a few hours, then Overcooked! 2 is definitely the game to pick up.