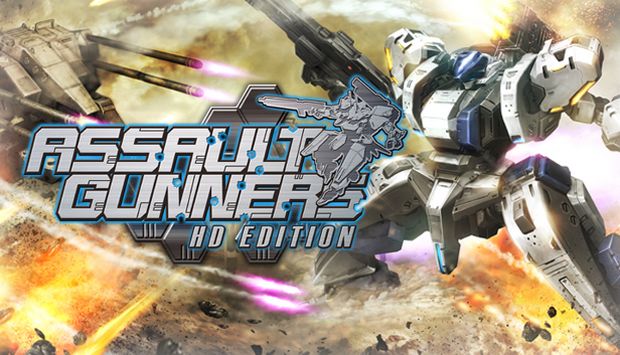 Mech-based games are quite the eclectic bunch. From Armored Core to Chosouju Mecha MG, there are all sorts of options to suit every type of mecha fan. Want to meticulously plan out your moves to become king of the battlefield? Go with Super Robot Wars. Want to control every last facet of your robot’s machinery? Steel Battalion sounds like it’s up your alley. Want to feel like you’re not even controlling a mech, but rather a small, insignificant toy with mediocre combat skill, sluggish aiming, and limited maneuverability? Well… honestly that’s kind of a strange desire and you should start dreaming bigger, but nevertheless – Assault Gunners HD Edition may just be the game for you!

If you’re anything like me, your first impression with Assault Gunners will likely be a poor one as you struggle to simply create a new save file while the game repeatedly asks you if you’re sure you don’t want your data to be saved. After a minute or so, you’ll suddenly realize that B is how you select things in this game, while A is how you go back. Maybe it’s just my muscle memory from over 15 years of gaming, but using B to confirm menu options just feels incredibly wrong. I wonder if this has something to do with this game being a Vita port – were they really too lazy to bother remapping the buttons from the PlayStation’s layout to the Switch’s? Worst of all, the control options offer no way to change any of the button bindings, so you have no choice but to get used to it.

Thankfully this button debacle has given me an excuse to write an entire paragraph dedicated solely to it instead of having to write a paragraph about the godawful story, which is so thoroughly uninteresting and presented in such a terrible manner (I hope you like scrolling text on a generic backdrop) that I didn’t bother watching any of the text-based cutscenes beyond the first one. In-engine cutscenes are even worse, as while the voiced Japanese dialogue from your Navigator during gameplay is usually translated in the top right of the screen, during cutscenes the developers simply didn’t bother to translate what the characters are saying at all.

Fortunately, you need to know none of the story to enjoy the gameplay, although whether you’ll enjoy it is another thing entirely. First off, I’d like to congratulate the developers of Assault Gunners for managing to do what should be impossible: making giant mechs feel dull to control. Your mech has two abilities: you can dash and hover with ZL (though your tiny starting stamina bar means you’ll be able to do these actions for roughly three seconds before recharging), and shoot various weaponry by selecting them with the face buttons and firing with ZR. Your weapons can be customized, so you can choose between rockets, assault rifles, cannons, melee attacks, and more. Lastly, you can use the D-pad to give your three squadmates various tactics, such as all-out attacking or making a defensive retreat.

Sadly, the gameplay is so basic that it doesn’t really matter what weapon or tactics you pick. Enemies are numerous in number but require no strategy to eliminate beyond aiming and firing. Sometimes the game tries to throw a wrench in the works by introducing a powerful enemy who requires a little more finesse to handle, but these are also swiftly dealt with. The closest the game comes to requiring skill is when you get decimated by an overpowered enemy and are forced to retreat to the Hangar to upgrade your own mech to satisfactory levels, where only your patience is tested as you are forced to trudge through copious amounts of customization parts and stats just to get back to the mind-numbing gameplay.

Assault Gunners barely even tries in the graphics department. The menus are nice with some nice futuristic tech-y vibes, and the mechs themselves are very cheap looking but get the job done. The environments, however, are incredibly barren and ugly. Most of the maps don’t even feel designed with the meager capabilities of your mech in mind, with vast stretches of land to cover and huge walls blocking off sections of the map that force you to slowly walk all the way around them. The devs do manage to make the most of what little there is though – there are 32 campaign missions to play with 4 difficulties to master, as well as 5 Inferno Mode stages that serve as endless combat arenas to test your skill. If you really love what Assault Gunners brings to the table, there’s even $5 DLC that adds another 15 missions, 3 Inferno maps, 15 weapons, 30+ mech parts, and 4 additional Navigator VAs.

Despite its simplicity, I can’t hate Assault Gunners HD Edition. It’s a low-budget mech shooter that knows exactly what it wants to be and it doesn’t try any harder than that. If you enjoy dumb grindy action games where you have to either turn off your brain or turn on a podcast to withstand the tedium, you might have a good time with this – everyone else will likely despise the repetition on offer.