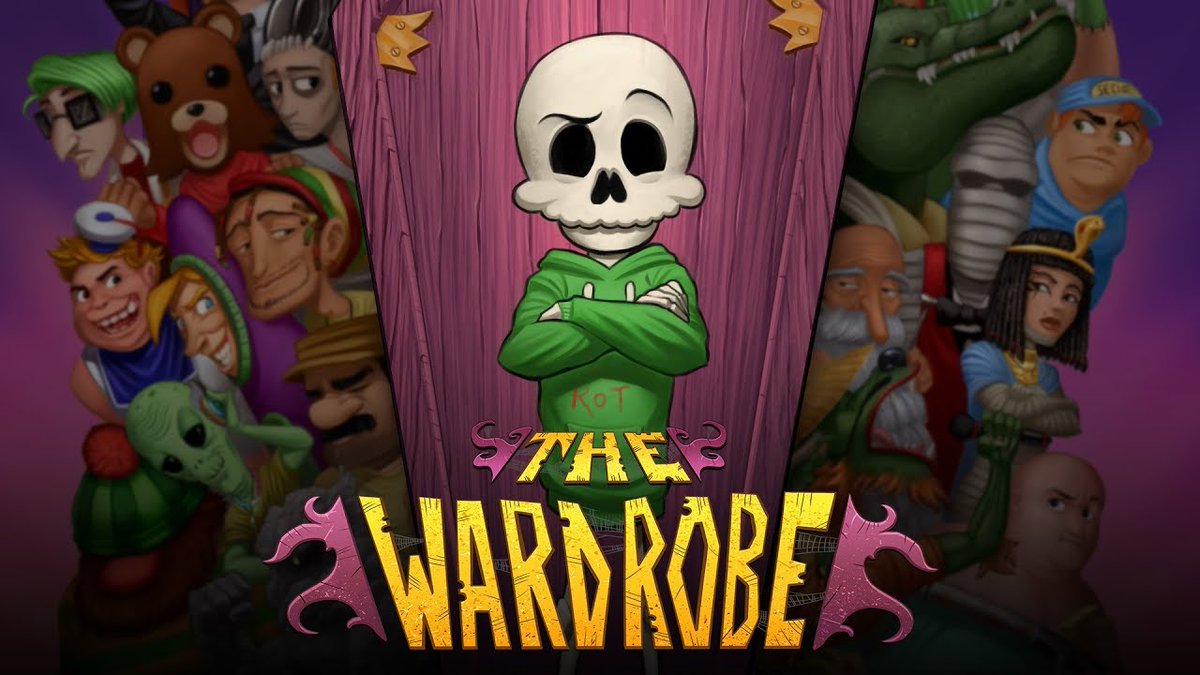 Warning: This game contains a skeleton protagonist. Those easily spooked should consider closing this page and reading another review. YOU HAVE BEEN WARNED!

The Wardrobe follows the trials and tribulations of Skinny, the skeleton of a young boy living inside a wardrobe. Roughly 3 years ago he ate a plum offered to him by his best friend Ronald at a picnic. With both boys being completely ignorant of Skinny’s plum allergies however, things didn’t end well. Skinny soon died as Ronald ran away screaming in terror. For some reason, Skinny was soon resurrected as a skeleton and decided to take up residence inside a wardrobe in Ronald’s room (why a wardrobe of all things is beyond me). There he waited for almost 3 years, never able to get up the courage to approach Ronald about the incident. Now Ronald’s family is moving away, the wardrobe is missing and Skinny is forced to step out into the world and make Ronald face the skeletons in his closet.

The gameplay flow of The Wardrobe will be immediately familiar to any fan of classic 90s point-and-clicks. Simply move the cursor around the screen and click anywhere to have Skinny walk there. Click and hold on any interactive object and you can choose to have Skinny look at it, grab it, use it, or talk to it. Not all objects can utilize all these options obviously and if you try to do something like make Skinny use a dirty toothbrush he’ll have more than a few choice words for you. You can also open Skinny’s inventory at any time to view items he’s collected throughout the game. Using these items to solve puzzles in each area is the key to progressing through the game and reuniting Skinny with Ronald and his wardrobe.

Let’s get this out of the way right now: the game’s writing is not the best and that’s pretty damning for a game built entirely around storytelling. The story is pretty underwhelming, but it’s the lack of necessary character interactions that really hurts the game. The game boasts that it has more than 70 different characters to talk to, but very few need to be spoken to in order to progress through the game. They’re no more than fun little baubles sitting in the background you can talk to, ready to present you with flavor text that has zero effect on your progress. This would be fine if the dialogue itself were hilarious, but that simply isn’t the case.

If you go into The Wardrobe expecting to laugh, I’m afraid you’ll be disappointed. Humor is subjective, but I challenge anyone to convince me that a dumb moving guy saying “I like marshmallows” or Skinny making as many references to the fact that he’s dead as possible is in any way funny. Most of the game’s humor takes the form of Skinny’s observations about the world around him, and those rarely amount to more than giving a description of the thing he’s looking at and quickly following it with a deadpan quip about said thing. It’s a common comedy style seen in other games like the Monkey Island or Sam & Max series. Unfortunately, The Wardrobe lacks the brilliant writing, sharp observations and varied delivery of either of those. Instead you’ll inevitably find yourself bored with Skinny’s cynical, rote commentary within a matter of minutes, constantly wondering when you’ll get to the funny part.

Unfortunately, the jokes aren’t the worst part, as the puzzles in The Wardrobe are truly awful and require the mind of a mad genius to figure out. Of all the elements to take from 90s point-and-clicks, why couldn’t obtuse lateral thinking exercises have been left out? In one of the game’s early puzzles you’ll have to figure out how to distract the moving people so Skinny can sneak through the room and change the time on a clock. It took me far too long to realize I had to put bubble gum into the mouth of a Moai head statue, making it blow bubbles that pop, distracting the movers and allowing Skinny to slip past them unnoticed. Why would anyone think to put gum in a stone statue and expect it to suddenly come to life and chew it? Later I learned that the right way to move a box so Skinny could sneak behind it was to tie a string to a fork and throw it at the box. Of course! Why didn’t I think of that in the first place?! Unless you’re a psychic you’re going to need a walkthrough to get through this game at some point, so keep that in mind.

Visually, The Wardrobe is fairly pleasing to the eyes. Environments are littered with loads of items turning every screen into a collage of colorful junk, always promising something new to discover if you scour the screen enough. The art direction fits with the humorous nature of the game, with its plentiful colors and cartoonish characters bringing the world to life. That said, my one issue with the game’s visuals is how many references are scattered throughout the game. I’m all for a fun cameo now and again, but The Wardrobe is utterly awash in references to anime, cartoons and movies everywhere: Sanji from One Piece, Princess Rainicorn from Adventure Time, Slender Man, Jessica Rabbit, a turret from Portal, the list goes on and on. When I got to the Halloween party where literally everyone was dressed up as a movie character I’d had enough. They’re not even disguised as cute thematic parodies like in Guacamelee, they’re literally copied wholesale and pasted into the game. It comes off less as flattering imitation and more as a desperate attempt to maintain the players interest by adding recognizable characters when the writing fails to be funny or insightful.

On the audio side, the music mostly lingers quietly in the background and doesn’t draw much attention. The voice work on the other hand is very well done, with Skinny’s comical voice work easily being the highlight of the game – plus all of the game’s voices actually sound like they were recorded with the same high-quality mic, which is more of a rarity in indie adventure games than you would think.

The Wardrobe is a point-and-click full of colorful imagery and wacky characters. Sadly, unfunny writing, an overabundance of cheap references, nearly unsolvable puzzles and a forgettable story serve to drag the experience down at every turn. It’s hardly the worst game in its genre, but with better options available on the eShop such as Oxenfree or Thimbleweed Park, it’s a difficult game to recommend.