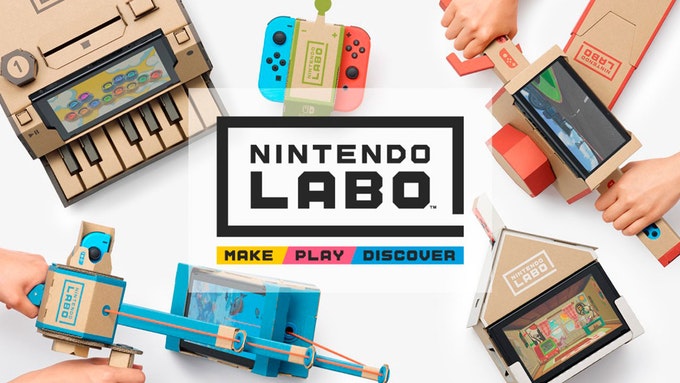 Nintendo UK have announced that their Nintendo Labo UK YouTube Channel has launched a series of weekly videos featuring Nintendo’s cardboard venture, Nintendo Labo. The videos will be hosted by Tom & Jamie Burns, Frankie and Nimmerz and they will be sharing the latest news, creative ideas, hints and tips. A number of videos have already been uploaded like the Mario Kart 8 Deluxe X Nintendo Labo update and an Introduction to the Nintendo Labo Creators Contest for Europe.

You can find out more in the the Press Release below. along with the videos, I have just mentioned.

Following the highly anticipated launch of Nintendo Labo, a new line of interactive make, play and discover experiences exclusively for Nintendo Switch, earlier in the year, there has been a whole host of amazing Nintendo Labo creations and customisations that people across the UK have been working on and sharing as part of the ever growing Nintendo Labo video community. The new hosts of the Nintendo Labo UK YouTube channel will be there each week delving deeper into each of the Nintendo Labo Toy-Con, sharing ideas, the latest news, hints and tips, launching exclusive competitions and showcasing the best UGC out there, all to help inspire creative minds and playful hearts alike. Tom, Jamie, Frankie and Nimmerz will take you on a journey through the main principles of Make, Play and Discover and will bring this to life through entertaining original video content.

Nintendo Labo is a series of DIY kits crafted to work with the Nintendo Switch console. By assembling sheets of cardboard into almost anything – a motorbike, a fishing rod, a 13-key piano or even a robot suit  – and combining them with the Nintendo Switch console – you will be able to bring your creations to life – from winning a race, catching a fish, to performing a song!