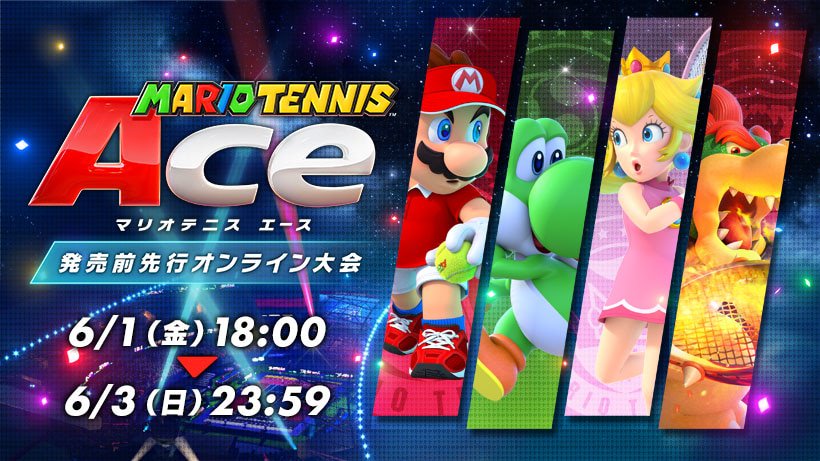 Earlier today, thanks to Nintendo Japan, the first wave of details rolled out for Mario Tennis Aces. Hours later, Nintendo Europe and Nintendo America have saw fit to provide details of their own, which includes a trailer for the game’s Adventure Mode and the news that the demo will actually have 9 playable characters, 5 of which must be unlocked. The full details can be seen here, including the trailer:

15th May 2018 – Fans looking forward to hitting the court with Mario and friends in Mario Tennis Aces for Nintendo Switch when it’s released on 22nd June can get an early taste of the tennis action with a free pre-launch online tournament, starting on 1st June, as detailed in a new Mario Tennis Aces – Pre-launch Online Tournament trailer on YouTube.

Tennis hopefuls will be able to pick from four playable characters – Mario, Peach, Yoshi, and Bowser – and take part in online multiplayer matches in a tournament format. As they advance through the tournament stages, they’ll earn points based on their performance, with five additional characters available to unlock in the demo by gaining enough points.

On top of the online tournaments, players can also get in some practice by playing one-off single-player tennis battles against a computer-controlled opponent*. Whether battling it out online against other players or polishing their skills against the CPU, all participants will be able to unlock a free additional costume of Mario in his traditional dungarees for use in the full game.

By downloading the free software from Nintendo eShop before the tournament starts, players can look forward to a weekend of fast and fun tennis action, as the tournament is open from 16.00 CEST on Friday 1st June until 00.59 CEST on Monday 4th June.