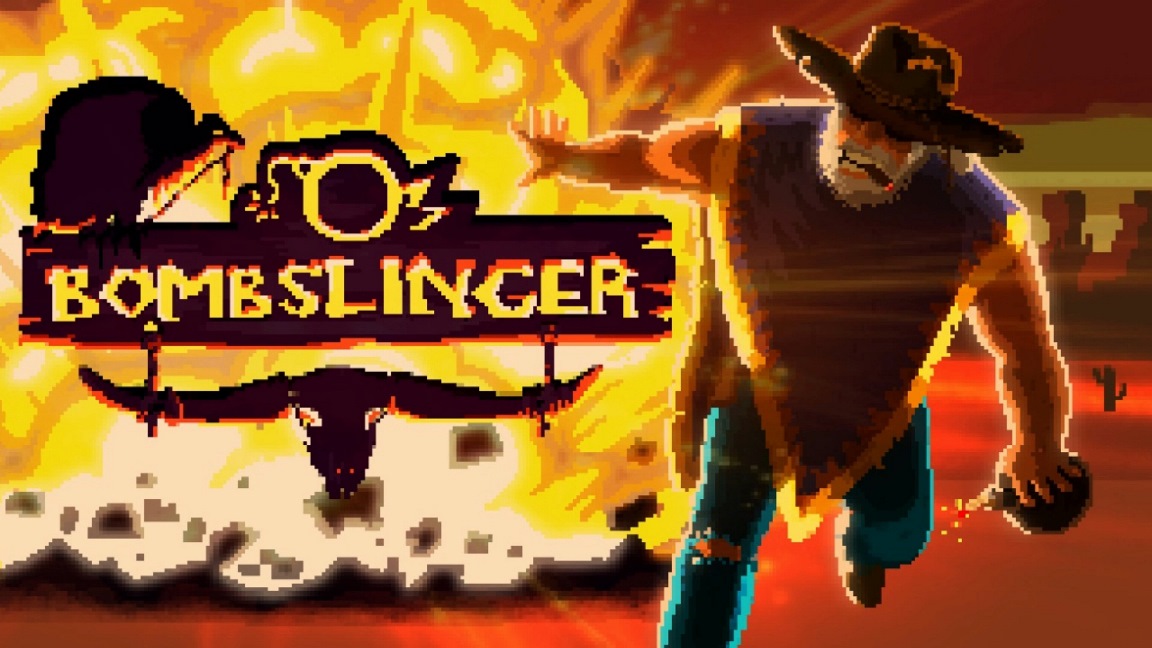 And boom goes the dynamite!

The year was 1983 and with developer Hudson Soft stepped onto the scene with Bomberman. For a strategic, maze-based video game, Bomberman went on to evolve into a series, with its latest instalment (Super Bomberman R,) having launched on Switch last year. But what is the relevance of all this? Well, as well as evolving into a series of its own, Bomberman also went on to inspire some of those who played the games, which is where Mode4 becomes relevant.

Having released on the Nintendo Switch last week, Bombslinger is Mode4’s take on Bomberman, and not only is it heavily inspired by the classic series, but it’s also a labour of love for the series and the Bomberman styled gameplay doesn’t seemingly disappoint. Sure, on the surface the two games couldn’t be any farther apart with Bombslinger being a game that takes place in the old Wild West, but when it comes to running around mazes, dropping bombs and blowing stuff up, the old “Bomberman” gaming experience is yours to have! Granted it’s not on the exact same level, but it is pretty close.

As for why the Wild Western? It’s all part of the story. Bombslinger is the tale of a bomb-slinging bandit who has had his fill of the wicked life he led as a bandit, and decides to settle down. So, he falls in love, gets married and right at the beginning of the game, it seems the Bombslinger’s old gang have other ideas, as they go to the ranch he now calls home and kills the wife and burn the place down. Obviously, this doesn’t go down all that well with our anti-hero and he’s out for blood.

Should you wish to help him achieve his revenge, this is where the main campaign comes into play and the Bombslinger must venture through a series of levels, all ending with a boss battle against one of his old team-mates, which as well as proving to be a challenge, does offer some dialogue so as to explain why they turned against our anti-hero in the first place. If you are successful in beating them all and surviving every hurdle and enemy that puts themselves in your path, then a final confrontation with the Gunslinger awaits you, but trust me, you won’t be getting to that point any time soon.

Instead of just being a Bomberman like game that plays out with a top-down view of a 2D grid, the levels themselves are procedurally generated so as to ensure a fresh experience every time you play and the game is a rouguelite. What this means is, even if you make it all the way to the Gunslinger in a single playthrough, after having successfully defeated farmers, goats that will charge at you and gun-toting ruffians, in the event you can not hold your own, it’s game over for you. There are no do-overs, no save states and no easy option. If you die, you will have to start from the very beginning and go through it all, over again. So, all that experience you gained from killing all animals and people who wish to do you harm, and the power-ups you were able to acquire due to levelling up, it all goes away.

Due to the excessive difficulty of Bombsliger, it’s understandable why it would put off most potential buyers as it is a game that will test even some of the more skilful Switch owners, but if you yourself, aren’t personally put off quite yet, there is more to know. Becomes of the difficulty spike, whenever you think you have seen the worst that Bombslinger has to offer, every new area has new mechanics for you to get your head around  and it won’t be all that long till there are big bad guy brutes who are rather skilful at granting death to revenge seeking gamers.

To make matters what, even if you can kill most of everyone you try to trap and run away from, there will be times you will run yourself into a corner, with no other option but to take a hit and blow up yourself, as you blow up the shrubbery around you, to escape. But, there are a couple of things you can bear in mind to give yourself a chance. Always keep your life topped up when given the choice upon levelling up. If you have the coin, which you can get from blown up bad guys and treasure chests, to buy life items, or even useful items from the shops you’ll encounter, do so. But most of all, try to collect as many keys as you can get (murdered enemies can drop them,) as they can open chests that contain better things like, ranged weapons. Although, during the later levels, enemies can drop those also.

Now, I could have chosen “kill all enemies” as the most important thing you need to do, but that one goes without saying. You actually need to kill all enemies present on the screen, just so that you can open up a path or two and advance to the next area, with more enemies to kill, a shop, or even a chest containing a life extension, awaits. But, for when Bombslinger does prove too much hassle for you, as long as you have a friend or 3, there is something else you can do. In addition to single-player, there is a multiplayer mode that consists of Deathmatch and Last Man Standing.

Both modes support up to four players and requires you to kill or be killed, but there is some differences between the two. With Deathmatch, the first one to a set amount of frags is the winner (the limit can be altered as players see fit before the game starts and even if you have no one to play with, you can always play against CPU.) As for Last Man Standing, it’s all about being the last Bombslinger standing, after everyone has lost every one of their lives. In the event you wish to extend sessions though, you can always increase the number of rounds that must be played and play with a set number of hearts that you have decided on. But if you’re hoping for more, there is none as that is all Bombslinger has to offer!

The controls might not be the greatest in the world and Bombslinger might not have all that much content, but if you are looking for a Bomberman experience on Switch, at a much more affordable price, Bombslinger is the game you’re looking for. It’s hard as hell and will test you repeatedly, but if you have what it takes to reach the Gunslinger and don’t shy away from a challenge, then you might just find a game you’ll greatly enjoy. Just be prepared to bring a bomb and everything else, to a gun fight!