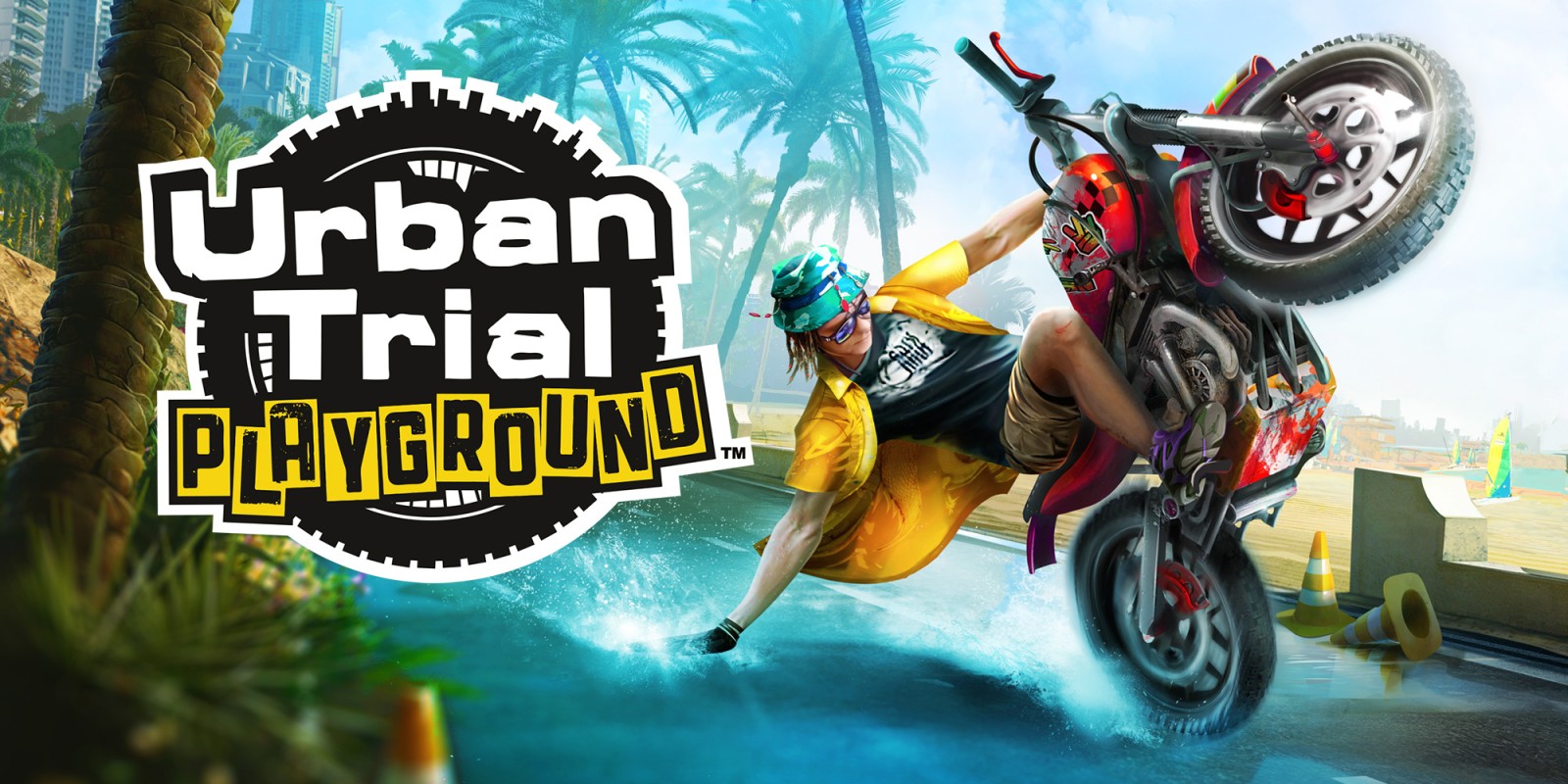 Hey! Have you ever wanted to drive a motorbike madly through people’s rear lawns, whilst jumping off ramps made out of empty Swimming pools? Perhaps leaping of bridges for some mad air whilst backflipping? Well, you can, in Urban Trial Playground.

Created by Game developer Teyon, Urban Trial Playground is a Nintendo Switch exclusive that is the third title in the Urban Trail series. The third-person 2.5D arcade racer, created with Unreal Engine 4, is the first in the series to have independent buttons for rear and forward brakes. It is also the first to feature split-screen multiplayer. The first game in the series, Urban Freestyle was created with the help of Julien Dupont, a Red Bull Racing Athlete, to make sure the developers got the right feel for the mechanics and physics of how the motorbike should respond to pulling off certain tricks and landings.
The aim of the game is to drive as fast as you can from one part of the track to the other, whilst trying to rack up as many points as possible by doing stunts. There are four main stunts; Wheelie, Stoppie, Back Flip and Forward Flip. There are two types of jumps; High Jump and Long Jump and then there is Speed. By performing as many as these together, you can rack up a combo to score even more points.
For a game built with Unreal Engine 4, it does look very good in both handheld mode and docked mode. The courses are nicely rendered and very colourful without looking too unrealistic. The different motorbikes have their own shape and style and sound exactly like they should do. The background music tracks are very modern and maintain the whole “Urban” appeal.

There are over 50 levels to play through that offer one of two modes; Freestyle and Time Trial. The Freestyle levels have you try and pull off combinations of stunts in order to get more than the target score and cross the finish line. In Time Trial, you have you race across the course as quickly as you can. If you replay the level after completion, you can race against your own ghost. Crashing and respawning come with a penalty that can take away points in Freestyle and adds to your time in time trial.

On most levels, there are a number of challenges that can reward you with in-game currency upon completion. There are also poker chips to collect as well to help boost your funds. You can use your gains to purchase upgrades for your bike, to make it faster, more agile, brake quicker, etc. As well as customize your bike, you can customize your character as well. You can choose between two riders; Tommy (Male) and Riley (Female). Both can be altered with different apparel which can be bought with the in-game currency. There is about 5 different items of each but the “look” of each really depends on your personal preference. To be fair, none of them are really my “style” but then, I don’t have style anyway.

Controls can be a bit hit and miss but part of that is due to player responsiveness. The ‘A’ Button controls acceleration and the left Joystick controls the rider’s weight distribution on the bike. Pushing the Joystick to the left shifts the rider’s weight to the back of the bike, allowing you to pull off wheelies and backflips. Pushing the Joystick to the right, shifts the rider’s weight forward. This helps to pull off stoppies and forward flips (when coupled with pressing the front brake button just as you leave the edge of a building or ramp.
You can gain a bit more air on your jumps by pushing down on the joystick and then rapidly pushing up just as you leave a ramp. This can be tricky and this is where your responsiveness can make or ‘brake’ (pun intended) pulling of more stunts as you take advantage of the air time. As mentioned before, there are two separate buttons for the brakes. The rear brake is controlled with ZL and the front brake with ZR. The L and R buttons are redundant which are a shame because they could have been used to do stunts as well like the “Superman” for example.

The Multiplayer Mode allows two players to go head to head in 2 different modes; Competition and Chase. Competition is an all-out race to the finish line. Chase, as the name suggests has one player try to catch up with the other to “catch” them. If the runner is caught, the chaser wins, if the runner reaches the finish line, they win. There is setting you can alter to change the time delay as to give the other player a head start.

Gameplay is strangely addictive. The completionist in me has me constantly going back over levels again and again in order to get the high score and the 5 star rank. Getting stars is important as they unlock more levels to play on. If you are the type of person that likes to show off how good you are there is an online leaderboard as well but that isn’t all. Urban Trial Playground also supports Video capture! So, if you have just pulled off an incredible 9X combo or something, you can share your awesome skills with your friends on social media.

With games like these, they all suffer from a common enemy, repetition. Though there are multiple paths on each level that you can take on some courses, you are still riding along on essentially a rail course. You can soon tire of repeatedly doing backflips and stoppies to rack in points. Yes, it is the main idea of the game but having to keep restarting because you crashed when trying to go for a perfect run is tedious and is made worse with the slightly frustrating loading time. Then again, that is the completionist in me and not all gamers are the same.

A fun little arcade game that you can lose yourself in for an hour or two at a time. The option to play with friends does help to sell the game, even if just for something a little different. It doesn’t offer a lot of depth to its gameplay but players are less likely to have a falling out with each other playing this game as opposed to… Mario Kart for example. $19.99 does seem rather costly but there is plenty of courses to sink your teeth into and challenges to help extend longevity.