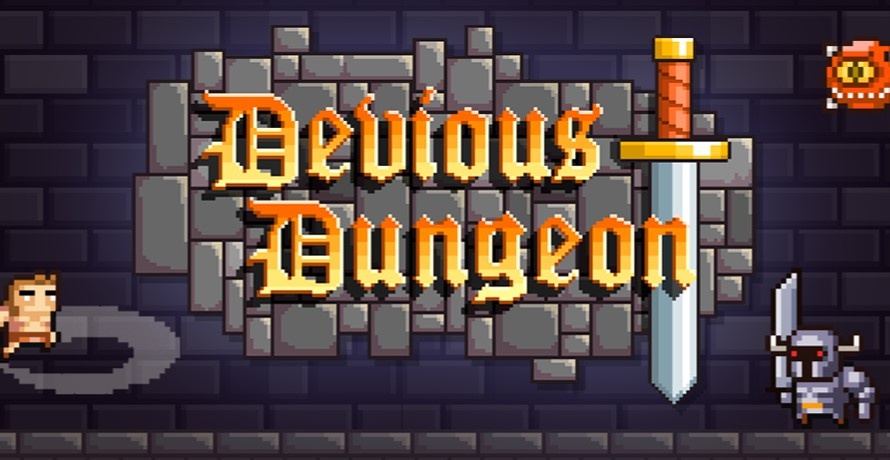 April 2, 2018 7:08 am Published by minusthebrant Leave your thoughts

Having nostalgia for retro titles is oftentimes a good thing, and Ratalaika Games, in particular, have been successfully tapping into this area of my mind with their releases on the Nintendo Switch. However, nostalgia can only carry a title so far and continued success will only come from tried and tested building blocks, such as solid gameplay, quality controls, and rewarding progression. Fortunately, Ravenous Games, creators of the League of Evil series and Random Heroes embrace this concept and succeed with their latest title Devious Dungeon, an action-platforming rogue-like title with an addictive gameplay loop.

Devious Dungeon is in the style and tradition of other games created by Ravenous Games, combining a retro aesthetic with platforming and action genre elements. However, for Devious Dungeon, they moved the setting to Medieval times. The story revolved around an evil dragon being awakened in the catacombs and frightening the citizens of the hilltop castle. The king has sent countless heroes into the depths to slay the beast, and unfortunately, every single hero has perished trying to take on this task. Now it is up to the player to kill the dragon and provide peace for the anxiety-ridden town.

You are the last remaining hero and you have to fight through five worlds, each divided into sub-levels. Making your way down into the catacombs, you’ll have to defeat a countless number of enemies including skeletons, wolves, warlocks, and other monstrosities. Waiting at the end of each world is a boss that provides a straightforward challenge. As you defeat enemies you can level up your character in three different areas, including Strength, Stamina, and Dexterity that will continue only for that run.

The levels are grouped together so when you die (and die you will), you’ll have to start from the beginning of the group of levels again. This can become annoying, but luckily the level order is randomized and you always see something different with each subsequent playthrough. The levels consist of caves, mines, and cellar-like areas that, while are basic in design, provide a nice looking retro aesthetic to the proceedings.

Coins are acquired by defeating opponents and breaking the various vases and statues in the environments. You then can use these coins to buy better weapons, armor, potions, or accessories in the shop. New weapons provide greater attack power and speed, while new armor or accessories can boost your defense and critical attack power. Once the latest item is purchased from a category you maintain that piece of equipment for each playthrough going forward. This is a clever way to make each defeat not feel like a waste as you are continuously earning better equipment for the next journey ahead.

Controlling your character is very simple as you only have to move your character, jump and attack. This simplicity makes Devious Dungeon immediately playable for anyone, but lacks the complexity to fully feel engaged with the combat. I was hoping for something more with the gameplay, in particular, the combat, but what is here is done very well and feels precise.

Overall, Devious Dungeon is rock-solid retro action title with good level design, precise controls, and enough content to keep you busy for awhile. There are no major weaknesses, however, the simplicity of it all could be off-putting to some as you can tell this is a well-done port of a mobile game. You know what you’re getting here and it’s fun, but I hope the developer takes some risk with their next title.