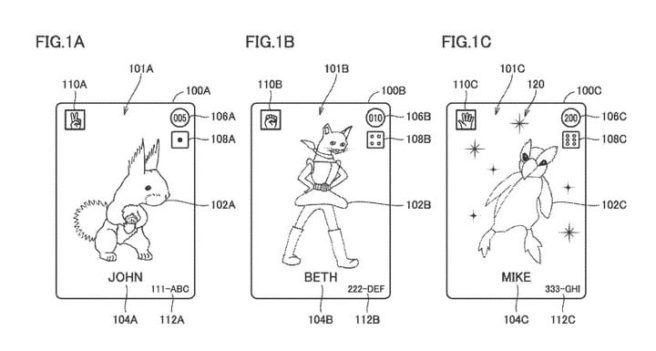 Nintendo had filed a patent for a new trading card set that is similar to the Animal Crossing and Mario Sports Superstars amiibo cards. These Nintendo Trading Cards will also use NFC technology and will work with Nintendo hardware, just like amiibo.

The patent was filed a few months ago and have been published today on the US Patent and Trademark Office. Below is an excerpt of the filing:

“The trading cards refer to cards on which variously different pictures are depicted and a purpose thereof is collection and exchanged. Namely, the trading cards are cards manufactured and sold aiming at exchange or collection of pictures on each surface thereof.”

A number of images were included with the patent. One of which showing a 3DS and how the new cards will interact with it. Much like the amiibo cards, they use the NFC chip to share data to the device.

There are some figures that display rock, paper, and scissors symbols on the upper lefthand corner of the cards. on the righthand side, there is a numbered 1-6 die. There is speculation that this information may be used to upload data for games if chance with other players.

My personal feeling on these new trading cards is that they could be a new range of Amiibo cards for the upcoming Super Smash Bros title for Nintendo Switch. Super Smash Bros for Wii U and 3DS was compatible with amiibo figures and allowed players to train their own AI character and save the data to their amiibo figure.

With the Switch focusing on more streamlined gaming, it makes sense to use amiibo cards instead of Amiibo figures as they would be a lot easier to transport.