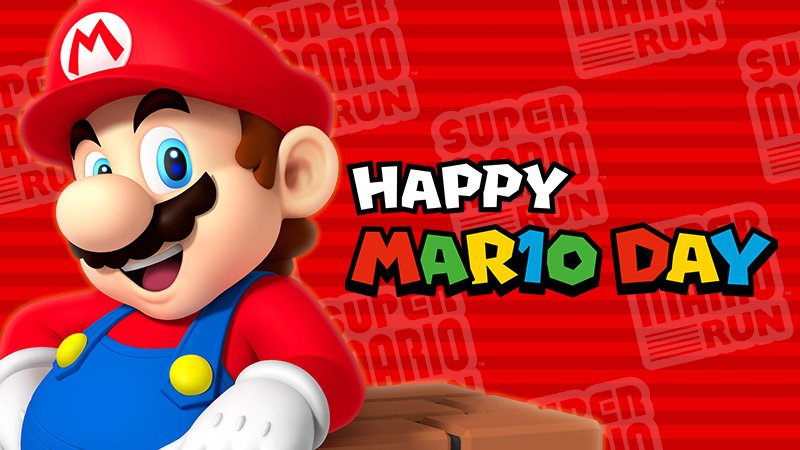 Do you know why video games are so awesome? It’s because of the people who play them, the people who make them and the people who write about them. Together, we are a community and there are days where this community gets together and unite in our singular love for something and today that love concerns Mario, so here is a round-up of our favourite #MAR10Day tweets:

Wahoo! Now you can navigate the world as Mario in @GoogleMaps to celebrate #MAR10Day! Check out #MarioMaps on Google Maps now for a week. pic.twitter.com/iX3uZMfLrc

Happy #Mar10Day! Let us know your favourite Mario memories using #MarioMemories for a chance to win a #NintendoSwitch (Red) signed by the voice of Mario, Charles Martinet! All info: https://t.co/ATN2PKwfYc pic.twitter.com/9UGLBozsgO

From his first appearance in Donkey Kong all the way to Super Mario Odyssey, Mario has been on some incredible adventures! #MAR10Day pic.twitter.com/bKVYrdRQ69

Which Mario are you celebrating for #MAR10Day? Take this poll and choose your favorite! https://t.co/xdo0fbSB3Y pic.twitter.com/tcabJVVCZJ

In honor of #MAR10Day, Mr. Koizumi has provided this drawing of Mario! Think you can draw Mario as quickly as him? pic.twitter.com/ymzQgsDJwD

Dr. Light said to throw Mario for #MAR10Day! Or… was it to throw him a party? Ah well – no hard feelings, right, red guy? pic.twitter.com/3SdYAtTzWe

Smash some bricks and bring in those coins. #MAR10DAY pic.twitter.com/k75wBIt0Eh

In celebration of #MAR10Day, #SuperMarioRun is half off till 3/25, and holding an in-game event where you’ll only get Mario items in the Remix 10 Super Bonus Game for the next 3 days! pic.twitter.com/XT09SJWL7L

Throwback today with this video of me and a beardless @kitosan playing the Super Mario Bros. theme song. Happy Mario Day everyone!!!!!! ❤️ pic.twitter.com/BYGODFoKkr

Thank you everyone for making this day so awesome!