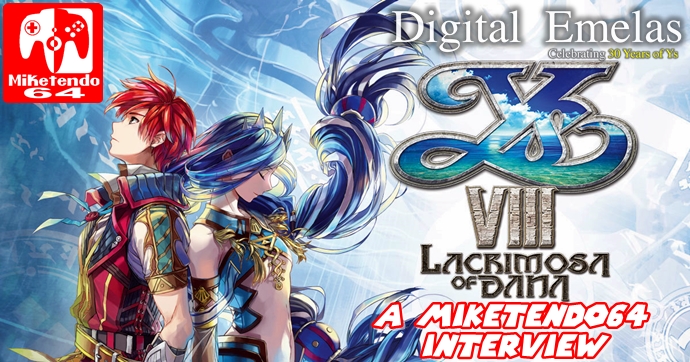 [Interview] Celebrating 30+ Years of Ys! We Chat with Limfinite of Digital Emelas

So, Ys VIII: Lacrimosa of Dana. It’s coming to the Nintendo Switch, we only posted an interview concerning the game, with NIS America today and you probably thought that would be everything, but it’s not. Knowing we were going to do Ys VIII: Lacrimosa of Dana interview, we felt it was necessary to learn about the history of the series, so we got in touch with a Ys fan site, and this is how we got on:

​ In typical interview fashion, would you be so kind to introduce yourself to our readers and tell us a bit about your involvement with Digital Emelas?

Limfinite: Thanks for having me. I’m often known as Limfinite within the Ys community, Producer of Digital Emelas.

Digital Emelas in a Nutshell:

Miketendo64: For our readers who have never heard of Digital Emelas, what it is it and what is its purpose?

Limfinite: DigitalEmelas.com is a website we created to spread awareness of the Ys series outside of Japan. It’s very popular there, but quite niche over here in the West. If you walked up to a random person in a gaming store (in North America) and asked if they heard of Final Fantasy or Zelda, they’d likely respond “Yes”, but ask them about Ys and you’d likely get a blank stare. We also hope to guide new players by introducing the chronology of the games with a spoiler-free look at its history in North America. Our team consists of a small group of Ys enthusiasts, some of whom have worked on the official localization of Ys games.

The Decision to form Digital Emelas:

Miketendo64: Other than the desire to raise awareness of a beloved video game series, did anything else prompt you to make Digital Emelas?

Limfinite: Simply put: I wanted to build a tool to explain what Ys is. For years, I’ve been an advocate for the Ys series and my involvement with online forums and social media channels led people to turn to me for answers. My collective inbox eventually flooded with repeat questions: “What is Ys? What is the best place to start? What order are the games?” I’m a Graphic Designer by trade, so I decided to create Digital Emelas as a one-stop introduction for newcomers to the series. Now, whenever I am asked the aforementioned questions, I simply point them to our website. It gained quite the following, and according to my Google Analytics, I’m fairly happy with the positive reception it’s received from fans, newcomers, and companies such as NIS America, XSEED Games and Nihon Falcom themselves.

The Continuation of Digital Emelas:

Miketendo64: Upon first starting Digital Emelas, did it ever occur to you that you would still be doing it today and how are you finding it?

Limfinite: It’s a pleasure to continue advocating for the series after all this time. Digital Emelas is a joy to update and I couldn’t be happier with the response. Plus, with developers like XSEED Games, NIS America, DotEmu and Limited Run Games putting out more Ys goodness in the West, it’s a good time to be a Ys fan. I’m glad people are curious about Ys and using Digital Emelas as a gateway platform.

Miketendo64: ​ Given the fact Ys is a series that dates back to 1987, how much has the series grown in your eyes and what are your highs and lows?

Limfinite: It’s come a long way. Each new game introduces new mechanics and is progressively more ambitious than the last in terms of story, music, gameplay, scale (size of the game map) and extras. Many games have also been remade over and over again. In fact, Ys Origin, I, II, Felghana (III), Celceta (IV) and Napishtim (VI) make up a solid arc surrounding a race called The Eldeen. I’m impressed that a developer can be consistent with its story-telling for these many decades, which is why I fell in love with the series.

As a high point, I think XSEED Games really did wonders for Ys when they began localizing the series in 2010. Prior to their involvement, the earlier games went under the radar for most gamers, shadowed by the likes of Final Fantasy and other big-name JRPGs. Ys is still fairly niche today, but XSEED’s involvement really brought Nihon Falcom back into the spotlight. They put the Trails series (Trails in the Sky, Trails of Cold Steel), Xanadu, and the recently released Zwei series on the Western map. Without them, I doubt the Ys series would be very popular in the West today.

For a low point, I’d say the overall lack of awareness over the years. The name doesn’t do it any favours as it’s difficult to pronounce (Eess, “Geese” without “G”, noun). Plus, the first few games spelled it incorrectly on the package design itself (Y’s on Sega Master System) which didn’t help. It’s a shame, as Ys is one of the pioneering video games for the role-playing genre (predating Final Fantasy by a few months in Japan).

Miketendo64: Being as though you are a website dedicated to the awareness of the Ys games, do you have a favourite game and why?

Limfinite: I’m a fan of video game lore, and Ys has a very deep and connected mythology that many casual fans often miss. Similar to delivery in games like Dark Souls, the story isn’t out-right told to you. It’s explained through environments, NPCs, relics and subtle game designs. That being said, my favourite game in the series is Ys Origin because of its theme surrounding prophecy.

On that note…If anyone tells you Ys games aren’t played for their story, it’s only a half-truth. Ys actually has a fantastic story and is deeply connected in nearly all the games. It simply isn’t a primary focus unlike other titles from Nihon Falcom, namely the Legend of Heroes series. I personally play Ys for its story, and it’s never let me down. I also don’t play Streets of Rage for its beat ’em-up gameplay. I play it for the music, and I know I’m not wrong for doing so.

Miketendo64: What is your singular most memorable Ys moment? (Be it a game or even an interview you conducted?)

Limfinite: Having known I have an extensive Ys library, one of my best friends gifted me the digital PlayStation version of Ys I & II Chronicles a few years ago. She was genuinely curious about the series, so as part of my gift, she stayed with my wife and I for a few days and played the first Ys game while I watched (on PlayStation TV). It was, by far, the best gift I had ever received; not the game itself, but the shared experience we had. It was priceless. Ys is now her favourite series of all time, has a large Ys collection of her own, and is one of our Lead Editors on Digital Emelas.

Miketendo64: If you were to recommend a good starting Ys game to our followers looking to dabble in the series, which one would you pick?

Limfinite: This is a hard one because it really depends on the player. For HARDCORE enthusiasts, I’d recommend the first two Ys games which are bundled in Ys I & II Chronicles for PSP, Vita/PSTV (digital) and PC (digital). The first two games are quite short (less than 10 hours each) and are updated to be much more accessible for modern-day gamers. However, they play unlike any other ARPG you could think of. When I say “hardcore enthusiasts”, I mean those who wouldn’t mind playing the original Final Fantasy or Dragon Quest this day and age. It’s like tasting fine wine that’s aged for over a century, or driving a vintage car from the early 1900’s.

For casual gamers, or those looking for something more “modern”, I think Ys VIII is a very good starting point as it doesn’t share a lot of lore that’s heavily connected in the earlier games. Ys VIII is the most stand-alone story of all Ys titles and is an absolute joy to play. It does tie-in with the other Ys games, mind, and those who played the others before Ys VIII may have a better appreciation, but not required. This is exactly the type of question that we built our website for. Check out http://www.DigitalEmelas.com/ and click on “What Is Ys” at the top. You’ll see recommendation charts and descriptions for each gameplay style. Pick what works best for you and enjoy.

Miketendo64: Lastly, is there anything you would like to say to your ever-growing fanbase of readers and supporters?

Limfinite: Ys deserves to share the spotlight with the likes of Final Fantasy and The Legend of Zelda. Nihon Falcom and its English Publishers don’t have the same behemoth marketing budget as Square-Enix and Nintendo. Marketing does wonders for any product. That’s where YOU come in. Help us spread the word of Ys. We know the name “Ys” causes much confusion and many don’t know where to start. We built Digital Emelas for YOU to use when explaining the series to your friends or strangers. It’s developed and maintained by a group of enthusiasts who worked on the official localization of Ys games. If you see/hear someone asking, “What is Ys? What is the best place to start? What order are the games?” show them the website. It’s why we’re here. Ys is love. Ys is life.

To our new friends, thank you and we wish you the best of luck with the site. May 2018 bring great things to you!