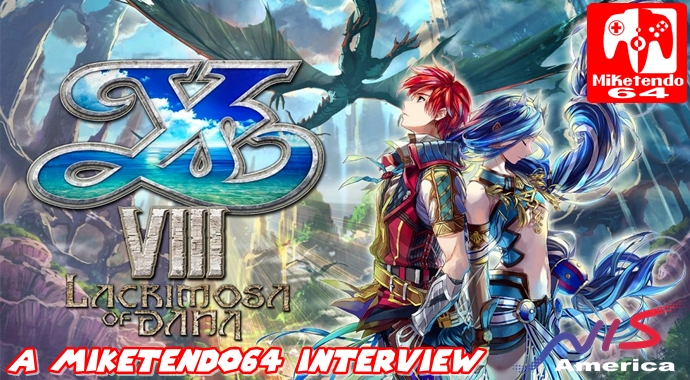 [Interview] A Little Lesson on Ys VIII: Lacrimosa of Dana for Nintendo Switch with NIS America

While some would argue Mario Tennis Aces and Hyrule Warriors Definitive Edition were the biggest things to take away from the Nintendo Direct Mini we had back in January, we’d argue every game that was shown is worth talking about. Especially Ys VIII: Lacrimosa of Dana, as it will coming to the Nintendo Switch later this year and with such an exciting release on the horizon, here’s what we got to learn about it from a chat with a representative of the game’s publisher:

​In typical interview fashion, would you be so kind to introduce yourself to our readers and tell us a bit about your involvement with Ys VIII: Lacrimosa of Dana?

Judith Pi: Hi! My name is Judith and I’m currently an Associate Product Marketing Manager at NIS America. I am in charge of all aspects of social media marketing for this title.

Ys Games in a Nutshell:

Miketendo64: For our readers who have never heard of Ys VIII: Lacrimosa of Dana, or even the Ys series, what is it and how does it play?

Judith Pi: Ys is an action RPG series that centers around Adol Christin (besides Ys Origins). He’s an adventurer who travels the world (usually with his companion Dogi). The Ys series gameplay has evolved a lot over the past 30 years, with several different styles, but all the games feature fast, addictive gameplay and Ys VIII: Lacrimosa of DANA is no exception!

Ys VIII’s  Performance is Currently a Work in Progress:

Miketendo64: ​ ​ With performance being a big issue for a lot of fans, and file size, as it often determines if they’ll go physical or digital with their purchase, at what frame-rate does Ys VIII run at when docked and undocked and do you know how big it will be to download?

Judith Pi: This is still being worked on by the development team, but we are aiming for the highest quality possible in all aspects.

Miketendo64: With a Summer release planned for the Switch version, can you comment on will it be early or late Summer?

Fan Reaction to Ys for Switch:

Miketendo64: ​Since announcing Ys VIII: Lacrimosa of Dana for Nintendo Switch, how have you found the reaction from your Switch supporters?

Judith Pi: Many Nintendo Switch gamers have compared Ys VIII to the Monster Hunter and Xenoblade series. Also of note is that this is the first time an Ys game has been brought over to a Nintendo home console since Ys III: Wanderers from Ys was launched on the SNES.

Miketendo64: ​With some things often being lost via localisation, can you comment at all on how much the Western release of Switch version will differ from the original game that initially released in Japan?

Judith Pi: We believe that the revised localization of Ys VIII better captures the essence of the Japanese language version. That said, language and culture are deeply intertwined and not everything can translate 100% from one language to another; in those cases, we have made sure that the essence of the original is preserved.

No Nintendo Cameos to Disclose at this Time:

Miketendo64: ​ ​As seen with the recent releases of Skyrim and Rocket League, there was some certain Nintendo IP themed attire and cars made exclusively for the Switch version of the titles mentioned. Can we expect something similar for Ys VIII: Lacrimosa of Dana?

Judith Pi: Please stay tuned for more details specific to the Switch version of this game.

Miketendo64: ​ ​Unlike series’ like The Legend of Zelda and Final Fantasy, Ys games seem to be much loved by all their fans, with no real game being praised more than the other, as each one is created to be a work of art and takes as long as they need to perfect before releasing. That being said, do you have a personal favourite game that does stand out from the rest?

Judith Pi: My personal favorite is Ys VIII, actually! I know it sounds cliché, but it’s true. I’ve played Ys I and II, Oath in Felghana, Ark of Napishtim, and Memories of Celceta, and I have to say I like the action RPG style gameplay that Ys VIII has to offer. If we’re talking about handhelds, then my favorite is probably Ys I and II, because it’s the first game and has a very straightforward and classic story.

Miketendo64: Lastly, is there anything you would like to say to your ever growing fanbase and supporters?

Judith Pi: As the social media manager, I would like to say a HUGE thank you to all of our supporters who take the time out of their day to talk to us via our social channels like Twitter, Facebook, and Instagram. It makes me so happy to be able to personally see what everyone has to say, the good and the bad, things we can improve on, and things you are all excited for. Nothing makes me happier than being online and getting to know you all through our games. Thank you, and here’s to more super fun times, dood!

To Judith, thank you for taking the time to read this and our readers, we thank you for joining and hope you look forward to learning more about Ys VIII: Lacrimosa of Dana for Nintendo Switch, over the coming months.