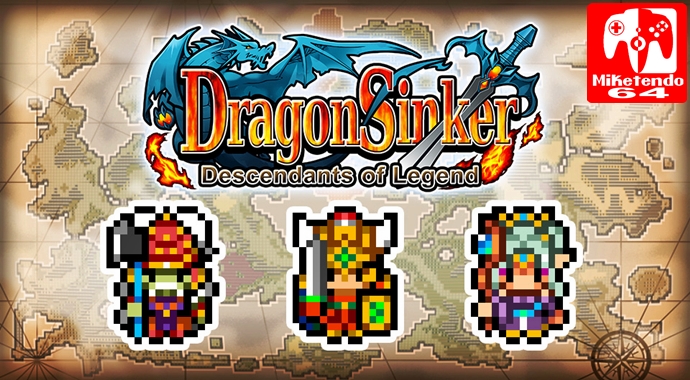 Dragon Sinker is a charming RPG with 8-bit graphics and sounds, a great nostalgic game for those who enjoy the classic gameplay. With multiple jobs, or classes, and races to choose from, it’s a fun dip into a fantasy land with plenty to explore.

While this game was very similar to your typical RPG, it was unique as three different races come together to defeat a common enemy.

Gameplay is fairly simple for Dragon Sinker. Your character is moved via the left analog stick or the four buttons on the left Joy-Con. Actions are used with the A button, both on the overworld and in battles.

You opened the main menu with X and could “auto-pilot” the battles with Y, but for the most part, you just wandered around and pressed the A button. It was refreshing for me as I didn’t have to worry about too many buttons to remember and I could just focus on the gameplay. The battles were fun as you could control 3 parties of 4. You could swap out the teams at any time during your turn. You controlled your characters to either attack, use an item, or skill, which used MP to deal greater physical damage, lower the enemies’ stats, or up your allies’ stats or heal them or yourself. Or, you could put them on auto and watch your team destroy the enemies.

The Auto-Battle mode was definitely useful when we were just traveling to our next destination. It didn’t take too much time at all for the teams to defeat the enemies, and even a few of the bosses were taken cared of by the AI. You were able to switch out characters between the three teams in the main menu, playing around with the benefits from the different races and jobs each character had, seeing which ones worked the best together. With a bit of money, you could switch jobs the characters had as well. If you wanted a trio of bards following your protagonist, go for it!

I enjoyed how the overworld was set up as well. It was similar to Final Fantasy in which it seemed as though you were just walking on top of the map roaming around. Monsters would jump out of you, you’d defeat them, and go on your way. There were many caves, or “dungeons,” to explore and even various villages to enter. Each village had weapons and items shops as well as Inns to rest your team. There were a good amount of characters around that gave you side quests. Sometimes, after completing a side quest, that character would join your team.

Dragon Sinker is a throwback to the 8-bit pixel era of gaming and the style definitely worked with this fantasy RPG. While we played the game with the Switch docked, it also looked fantastic in handheld mode.

I’ll admit, I think I enjoyed the game better on handheld mode. The graphics felt more appropriate for a smaller screen. It worked either way though and it was nice to have it on a big screen because, despite the single player aspect, we played together and passed the Joy-Con back and forth.

The music was awesome. It matched the style of the game really well, and the tunes were just fun to listen to. My favorite was definitely the music that played while we traveled along the map in the over world. It just had an upbeat march to it, giving us a sense of adventure.

The music was something I found myself humming along to, especially the battle music. I think that one was my favorite. The sound effects were fun too. The overworld music and some of the sound effects reminded me of playing Pokemon, which of course, I loved.

The story begins with you, Prince Abram, a human, inside a volcano with Clarke and Bernard attempting to defeat Wyrmvarg, the evil dragon eating humans as sacrifices. This results in a retreat and thus your journey begins to find the legendary weapons to defeat Wyrmvarg once and for all. Of course, you don’t go on this journey alone.

Throughout the journey, Abram teams up with Mia and Bowen, an elf and a dwarf respectively. While the journey may be about finding the legendary weapons that were said to have sealed away Wyrmvarg eons ago by heroes of the three races, Abram, Mia, and Bowen must learn that it is the unity of their races rather than just the weapons that truly defeated Wyrmvarg.

It had a lovely message and you could choose certain responses for Abram to reply with. I assume, based on what you say, determines what kind of ending you get for the game. I believe we got a neutral ending because we felt bad being snarky to the other characters at times. Of course, it was hard for either one of us to get attached to any characters as they were pretty flat throughout. They repeated themselves a lot and didn’t really grow as the plot went on.

Dragon Sinker, with its multiple jobs, customizable teams, plenty of side quests, and different endings, has plenty of replay value. The ending of the main story heavily hints at more adventure after the Big Bad is defeated, hinting at more things to discover as the game gives you a chance to complete a new ending.

For an RPG, Dragon Sinker was a casual game. There was not much asked of you in the overworld and even in battle you could just sit back and watch your characters do the work. It made for quick gameplay and, since none of the characters had any real development throughout the story, it was easy to go on auto-pilot and let the game play itself. Still, the graphics and music were charming and it was a fun plot to explore.