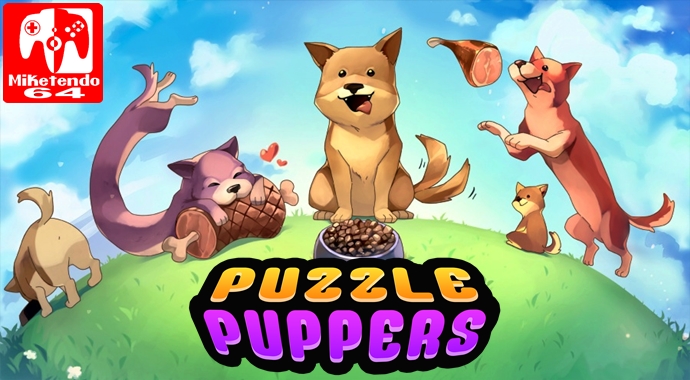 Elastigirl has nothing on these pups!

With the Nintendo Switch constantly growing in favour by all involved (Nintendo, gamers, publishers and developers,) more and more games are gracing the platform on a regular basis and while not all of them can be stellar indies that will have us in awe, some are cute, yet bizarre little titles that can be more fun than previously expected and one such title that falls in the latter, is the recently released Puzzle Puppers, but will it hold its flavour? The short answer, no.

Developed by the Canberra (Australia) based Cardboard Keep, Puzzle Puppers is a puzzle game all about hungry dogs, large hams and a series of obstacles that these dogs must undergo, if they wish to get to their awaiting and colour associated food bowl. Should Puzzle Puppers sound simple, it’s because in theory, it is. Across the game’s 80 levels, the goal of each one is to ensure that each pup present on screen (can either be 1, or even 6 depending on the level,) can get to their food bowl, without being obstructed by another pup and the reason why I say obstructed, is because the dogs don’t walk, they stretch and they will keep on stretching as long as there is available map space for them to occupy.

As for how to move your canine companion, via the use of the D-pad buttons to advance, R to swap between dogs and B to undo a bad move, (holding B will undo all moves the selected dog has made,) you’ll be moving in no time. However, if you need a little bit of help, you could also use the left analogue stick to highlight the tiles around your pooch and use A to confirm which one you want to actually step on, so there are options, just don’t go expecting you can play with your Pro Controller as it isn’t supported. (Single Joy-Con isn’t properly supported either if that makes you feel any better.)

In the event you succeed in getting each dog from Point A (their starting point,) to Point B (their colour associated food bowl,) then you have beaten the current level, and it’s time to move on to the next one. Although, with a star system at play, unless you’re willing to get every Ham present on the map, you will never get all 3 Stars each level has to offer and it also means you can’t play the bonus levels that are present in the form of every 5th level. But just because the first few levels have you solely dealing with flat terrain and no holes, the heat is soon turned on and you must now deal with things like holes that act ads portals, rivers that will have you drifting down their stream and then, to really stump players, there are multiple food bowls that one pup can eat out off, but you will need to figure out which one is the right one, as you scoff down each one of those meatilicious hams.

Sadly, although I really wanted to Puzzle Puppers to be one of those surprising little gems that you can invest a lot of time into, it’s not. It has very minimal content, due to a singular mode that even with its star system, not at any time are you ever truly challenged to complete any of Puzzle Puppers in a specific time. The worst thing about it though and I really hate to say it, but keeping with the minimal content, there is only one song and one pastel coloured background, throughout the entire game, which is fine at first, when you’re not noticing it due to focusing on the level your currently on, but when stumped on the later levels, you will find your gaze drifting to the background, and I can’t help but ask why wasn’t a second background introduced?

I know each map is a small island on a sea/ocean, but, the colour of the water and landmass could have been at least altered on some levels, to at least give the impression of there being a sunset in progress. You know, just a little something to have made the background feel more appealing, or even shadows of fish, swimming close to the surface but there’s nothing and I realise I’m blowing smoke where there is fire, but once you have beat the game, there is no reason to come back to it, as there is no replay value and the cute dogs are not reason enough to warrant a return trip, when there are other games on our Switch that are just demanding our attention. I will however hope Cardboard Keep consider a second attempt at Puzzle Puppers, and make a Puzzle Puppers 2, which would at least feature a second mode and more than one background.

Don’t let its cutesy graphics and puppy appeal fool you, Puzzle Puppers is one of those games that are simple to learn, but hard to master, but if you can master it and a lot sooner than you would like, you can beat this $4.99 in 90 minutes or less, but that’s no reason to let it deter you. It may not be as whimsical as it could have been, but Puzzle Puppers is an enjoyable affair, just not a very long-winded one, but it something you can set up for your children (if you have them) and leave the room for a few minutes, whilst you do one of your many daily chores.