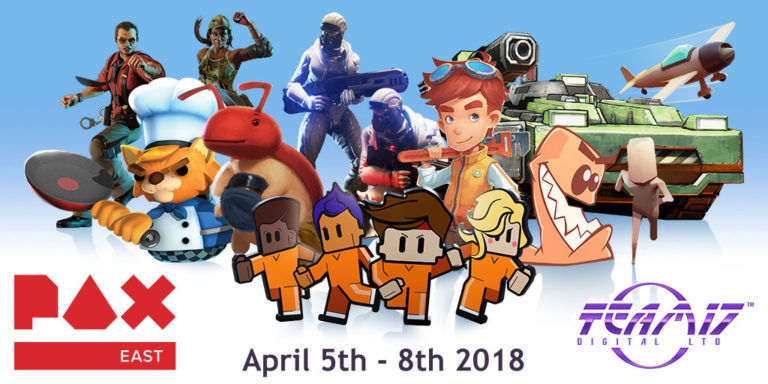 Attending Pax East 2018 and are a fan of the Nintendo Switch console? Then you’ll want to checkout these series of articles promoting Indie developers/studios who will be bringing their titles to the show floor.

Our second “Nindies at Pax East” will feature the game publisher Team17 and what they will be bringing to the show floor at Pax. Team17 is well know for many of their published franchises such as the Escapists, Overcooked, Yooka-Laylee, and more.

“Mugsters is a physics-based, action puzzle game where you must outrun, out-manoeuvre and outsmart your enemies by experimenting with different sandbox levels, vehicles, environmental traps and explosives.”

“Raging Justice is a modern take on the 2D scrolling brawler that pulls the classic genre kicking and screaming into the 21st century.”

“Yoku’s Island Express is a platform adventure with pinball mechanics, offering non-linear gameplay that gives you the freedom to choose your own path.”

“My Time at Portia is a 3D sandbox RPG inspired by classics such as Animal Crossing, Harvest Moon, Dark Cloud 2, and the works of Miyazaki.”

“Setting sail for Portia, a town on the edge of civilization, you’ll arrive to find a workshop left to you by your Pa – a place where you can begin to craft a new life, using the relics from the past to improve life for the villagers in the town.”

Like Swag? The first 50 people who play their games everyday of the event will get special pins! Can you complete the set?