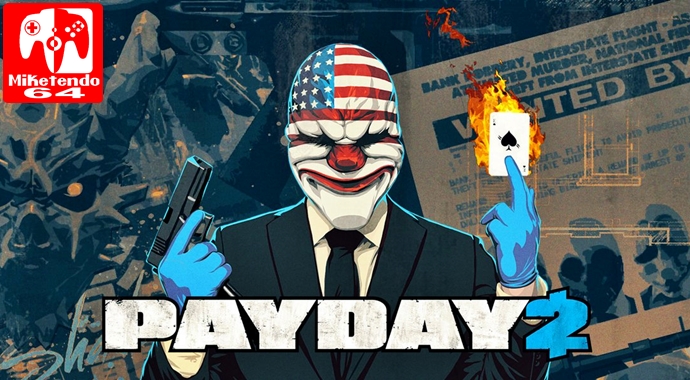 Time to get paid or die trying!

Have you ever said to yourself, “John Wick is cool and all, but he’d be a lot cooler if he walked up to a police officer and beat him to death with a wad of cash?” Well, if your answer is “yes,” than it sure as hell sounds like you need some PAYDAY 2 in your life, because the Starbreeze Studio published title, will allow you to do just that! But, what is PAYDAY 2?

Well, developed by Overkill Software and released in 2013, PAYDAY 2 (sequel to PAYDAY: The Heist,) is a co-operative first-person shooter, that firsts puts you in the shoes of DAALLUS, a member of  gang member, as part of a new crew looking to pull off a series of heists in Washington DC. However, because PAYDAY 2 is a port of an old game, old is what you can expect as the version of the game that we do have playable on Nintendo Switch, is nothing at all like the version we can see and play on PC. In fact, the Switch version is so “outdated” that despite updates and support being promised for the Switch version already, PAYDAY 2 is one update behind the console versions.

If it sounds like we’re trying to shame those responsible for the port, because of PAYDAY 2 being an older version, we’re not, as those of us who got to play the game this last week, did enjoy it, but there is a reason why the game is in the current state that it is in and that reason is deadlines. All parties involved with the port (which includes Sumo Digital,) did want to release a version that was as content packed as they could have in time for the launch, but to quote what was told to Polygon, “to get the game out in early 2018 on Switch meant that our [the] team had to go with the content ported and available at the time of console submission.” So, it does come across that PAYDAY 2 was a rushed job, but since a lot of websites have already shamed the game because of this, let’s try another tact shall we.

It sucks that we didn’t get a more modern version of PAYDAY, 2, but hey, outdated or not, we’ve got PAYDAY 2 on Switch and yes there are framerate and other performance issues, but the game is on a Nintendo platform and it is enjoyable as a handheld delight, so let’s skip the whole body shamming thing that everyone else is doing for the moment and talk about what PAYDAY 2 has to offer in its current state, which sadly does not include voice chat, which is something we can get into later.

Whilst on the surface, PAYDAY 2 seems like your typical first person shooter game where you can drive a forklift, sprint (press the left analog stick in,) melee (press the right analog stick in,) crouch (A,) shoot (ZR,) aim (ZL) and even interact with almost anything with R, like planting a drill to access safe, snatch money, drugs and stash bodies in body bags, it is anything but. Sure you’re not an Inkling or a soldier on the battlefield, inking/shooting the opposition, as this time you’re a thief who can either utilise stealth to carry out your elaborate heists and take a couple of hostages, or just go out all guns blazing, but there is more to PAYDAY than meets the eye.

Not only are all of the game’s 50 missions (PlayStation 4 has 58, which includes paid ones,) actually connected, but can be played in any order as you wish, as long as you’re not afraid to try out the more difficult missions, but there is a very intricate upgrade system going on behind the scenes. Provided you are able to complete the missions that can either last for a single level, or many stretched across a set number of days, dictated by the contract you’ve chosen, you will gain EXP points, level up, (all the way to Reputation 100 and beyond, thanks to Infamy) and cash that can be used in all kinds of ways.

You can buy/earn new masks (278 available) for your 17 playable characters to wear, which includes the Switch timed exclusive Joy. You can buy a whole range of arsenal, which includes dual pistols, shotguns, rifles, longbows, crossbows and a flamethrower (just because,) but you can then upgrade it, by giving it some necessary modifications to improve upon its stats. Should you wish to have a third weapon though, you can! Thanks to your melee, instead of having to use the butt of your gun, or your fist, your chosen melee can be anything from a wad of cash, a dive knife, a microphone or even a microphone stand! (There is so much choice on this one, provided you have unlocked them via levelling up.)

But even then, that’s not all, because still on the profile screen, when not visiting your safe house, or doing CRIME.NET offline for the single player campaign where the right load-out can determine success or failure as the AI will only revive you and not help you carry things like bags of drugs, there’s a skill tree for you to fall in love with and perk decks. Upon improving each one, not only can you truly begin to shape your own personal criminal, but it’s the means to ensure they are who you want them to be. It also means that via the Skill Tree, you can choose to be able to go down one more time and be revived, before being arrested. You can also speed up how much time it takes to drill and more, since the Perk Decks can also be used to improve your playthoughs, but I didn’t spend too much time trying them out, as I chose Hitman early on and I pretty much stuck with that beauty!

When you are done with customising your crook, be it via a controller in TV mode, which runs at 1080p or via touch-screen supported controls as the menus fully support them, in handheld (performs at 720p,) once done it is time to get back into the HD Rumble supported action for more of the same gung-ho action we all signed up for. Still, to truly get the most out of PAYDAY 2, being the co-op game it is, the only true way to play it, is to play it online with others. The online players you play with, won’t be able to hear you as voice chat isn’t supported, but at least when you play with them, the goal is the same, get the cash and get out. Although, there isn’t honour amongst thieves, as players can kill another and walk with the complete loot, so you really do have to be careful with whose contract you sign up for and who you let join yours.

Should you wish to go it with a crew you can trust though as online players and friends can help carry their share of the loot instead of just you, local wireless is supported, so if you have friends who have the game and they come round to play with you, you’re golden. Being able to communicate with each other clearly ensures that each and every heist can go the way you intended, instead of having one random screw everything up and now you’re in a shoot-out for 30 minutes that you may or may not survive. For me, it is this aspect of PAYDAY 2 that makes it or breaks it for me, as it is nice you can play offline with yourself and AI, but PAYDAY 2 is a co-op game and it’s not truly co-op, unless you are co-operating with others, which right now is only possible if you’re all in the same room, or have found players to play with and are happy talking to them through discord or even WhatsApp.

After all, there are some missions that were designed to require having players be in 3 to 4 places at once and unfortunately, the AI companions have no interest in that in helping out with that, which means you’ve either got to do everything yourself offline, or when online, hope you’re not all running to the same spot as that helps no one. And talking off running, while they dynamic scenarios do try to ensure no heist will ever play out the same way, thanks to randomised geometry and events, I think it’s time we ran this review to the awaiting getaway van, driven by a dude named Conclusion!

Although PAYDAY 2 on Nintendo Switch is not a bad port by Sumo Digital, yet despite the Switch version allowing you to play it anywhere at any time, and having timed exclusive that is Joy, it really doesn’t have all that much going for it. Don’t get me wrong, I’m going to sink plenty of hours into this beauty, but while it is great to run and gun with PAYDAY 2 on Switch, which is to receive a lot of updates in the coming months, it is still behind the other console versions and until voice chat is incorporated in some form, such as the Nintendo Switch Online app, right now PAYDAY 2 on Switch is not worth yet. Yes, the action is fun, the game delivers in action and you can get plenty of hours of enjoyment out of it, however if you’re expecting perfection, you are simply not going to find it with the Switch version, which at this moment in time, leaves PAYDAY 2 being a game you can either take or leave, until the promised updates are implemented and the game finally becomes the payday it was always intended to be for Switch owners.