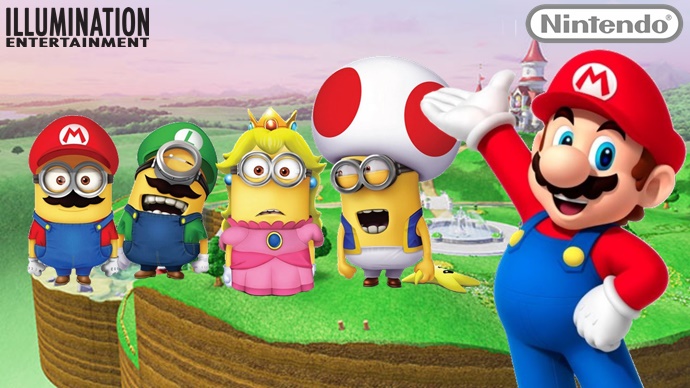 Nintendo have certainly been busy bees indeed, what with the announcement of Nintendo Labo a few weeks ago. Mario Kart Tour coming to smart devices and now, Their have officially announced their partnership with Illumination, the animated film studio behind Despicable Me and brought the Minions craze into the world. It was in talks before but now it has been confirmed and they will soon be working together to bring Nintendo’s biggest IP back onto the silver Screen.

Super Mario will be the main star of the film and the aim is to expand upon other mediums outside of videogames and to bring smiles to people around the world.

Here is the official statement:

Illumination and Nintendo Begin Development
on Animated Film Based on the World of Super Mario Bros.

The project will be produced by Chris Meledandri, Founder and CEO of Illumination and Shigeru Miyamoto, Representative Director, Fellow of Nintendo.

With this project, Nintendo will pursue its goals of effectively leveraging its intellectual properties in mediums outside of video games, and of bringing smiles to people around the world.

With this project, Illumination will continue to fulfill its mission of infusing joy and discovery into every property, allowing worldwide audiences of all ages to connect with the beloved characters and story from one of the world’s most popular franchises.

Illumination, founded by Academy Award® nominee Chris Meledandri in 2007, is one of the entertainment industry’s leading producers of event-animated films. The company’s franchises include two of the top-four animated films of all time, and its iconic, beloved brands-infused with memorable and distinct characters, global appeal and cultural relevance-have grossed more than $5.7 billion worldwide.

Illumination was recently honored by Fast Company as one of the world’s most innovative companies.

The worldwide pioneer in the creation of interactive entertainment, Nintendo Co., Ltd., of Kyoto, Japan, manufactures and markets hardware and software for its Nintendo Switch™ system and the Nintendo 3DS™ family of portable systems. Since 1983, when it launched the Nintendo Entertainment System™, Nintendo has sold more than 4.5 billion video games and more than 710 million hardware units globally, including Nintendo Switch and the Nintendo 3DS family of systems, as well as the Game Boy™, Game Boy Advance, Nintendo DS™ family of systems, Super NES™, Nintendo 64™, Nintendo GameCube™, Wii and Wii U™ systems. It has also created industry icons that have become well-known, household names such as Mario™, Donkey Kong™, Metroid™, Zelda™ and Pokémon™.