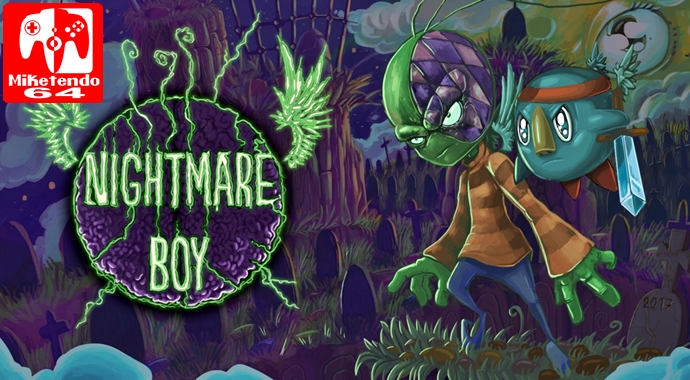 This one is going to take some time to wake up from.

Have you ever had a dream, where everything starts off pretty great, only to go horribly wrong and you find yourself fighting for your life to wake up from? Or having a dream that is so horrendously horrifying that it actually has you waking up in the middle of a night, in such a fright that you scream yourself hoarse and succumb to a panic attack that results in you having to go the hospital in the middle of the morning? I know I sure have and it’s probably why I started having regular bouts of insomnia from the age of 16, but the former, is most definitely what the latest Switch game I am to review, is about.

Developed by The Vanir Project and published by BadLand Games, Nightmare Boy is the latest BadLand title to come to the Switch after initially launching last year and it is the story of Billy. Billy is your regular human boy, he’s young, he’s human and he has dreams when he goes to sleep, but on one particular night, which just so happens to be the night that you get to play, Billy is visited by a floating head wizard called Balder. With Billy being the perfect height, age and having a fire in his eyes that would bring a smile to Lady Klormania’s eyes (the Queen of Noctum, a “state” in Donorok,) Balder swiftly uses his magic to make you become Rolok, the Queen’s son who was murdered by his father and then takes his leave.

With the look of a creature you’d expect to see in a nightmare, Billy, now under the guise of Prince Rolok, the Prince of Dreams, Billy must pursue the wizard who transformed him and fight for his life if he wishes to wake up and escape the nightmare, but it won’t be easy. Due to the death of the King Aster, Noctum is not the dream land it once was as chaos is going unchecked and the relationship between monsters, Mongos (creatures that act as caretakers to the worlds dreamed up by dreamers and mean no harm to anyone,) and dreamers, is dramatically worsening and it’s down to Billy to sort it out.

Thankfully, he is not alone in his quest, as during this nightmare filled Metroidvania that will see Billy venture through various terrains, which range from being a cave, to a frozen palace and even a lively forest, full of gigantic beasts, there are those who are willing to help him. The first of which Billy will meet, is one he’ll often encounter throughout the game and is called Menonia. Menonia will give Billy power-ups (aka orbs,) such as life upgrades. He’ll also give Billy some advice and encouragement and is one of the very few characters in the game who will interact with you and not attack you. Another character who is non-violent is Champernowne. He is the brother to Virgilio, (the first boss you’ll fight) and runs an arcade. Should you have enough gems, you will be able to buys things from him such as a Life upgrade, Aster’s Head, which is just one of the many parts you’ll need to collect in the game, belonging to the dead king and there’s even a Spell that lets you throw cakes. Sure, the cakes won’t deal damage, but throwing a cake in the face of a giant monster is hilarious, but if purchasing a serious item is what you’re after, then you can always get the highly recommended Triple Jump skill or Gears as it’s a special item that will allow you to rescue 1 of the 9 children that are stuck in Noctum with you.

As to why the item is special, it’s not just because it will let you save a child, who in turn will give you a new power, but because he is one of two children that don’t require you to beat a gigantic monster, just to beat, as the item is all he wants. He’s also a pretty nice guy, which is more than I can say for the very first child you meet, as the first child could also be the last child you save as the Super Punch power is required if you are to return his ball to him. If you are able to get the ball to him in one piece, he’ll be happy and go home, but if you accidentally kick it down a well and then talk to him, an argument will ensure between Billy and him and he’ll wake up, hating Billy’s guts and go unsaved.

Unfortunately for me, although the game uses a save system you must prompt yourself, for some reason it glitched and when I loaded, the ball was down the well and there was no avoiding the lecture I would get once again, To be perfectly honest, this absolutely frustrated me, as I really wanted to help the boy, but after investing 6 hours just to get to that point and unable to load a save that was done before the incident, I refused to start over new and reached the point of no return as in that moment Nightmare Boy went from being bearable for the last two hours, to unappealing. I could tolerate the game crashing unexpectedly and even tolerate the instances where Nightmare Boy decided it no longer supported me playing with a controller and I had to play it as a handheld only title before I archived the game and downloaded it again, but having died more than 90 times because the game is immensely difficulty, even on the easiest setting as I had already given up on playing it on Normal, the football fiasco was the straw that broke this camel’s back.

Now, because I did mention the game’s issues in the last paragraph, it’s only fitting I bring up some of the pros and talk about gameplay, so let’s get on with that shall we? Being a Metroidvania game, the “as expected” often stunning scenery and befitting soundtrack to set the tone, are in fact present and do a good job of representing this bizarre world that you must explore, via running, jumping and solving puzzles but there are also secrets. From collecting Aster’s bones to getting every last power-up, by saving every child and scouring every room, Nightmare Boy has a heavy focus on puzzle saving and even back-tracking and sadly, despite the power-ups and spells you can get, a Super Punch, or the Hugin and Munin spell, will not grant you the power to teleport to any of the save spots you have previously visited, so not only will you have to backtrack often, but you’ll also have to do it the long way most of the time and the problem with the lone way, is the number of enemies between you and where you want to go, or the heart that will restore your life bar.

When, not if the enemies kill you, you will be returned to the last room you saved in, which is home to a Grim Reaper, sat behind a desk, and while that might not be so bad as it just means you try again and correct where you went wrong, things like falling into lava is an instant death and while some bosses are close to rooms you can save in, others are quite the distance, so if you die fighting them, you will have to make that trek again just to fight them, in the hopes of winning this time around. On top of that though, even just trying to save can be a hassle as you’ll actually be charged for saving, with the first time solely requiring 20 gems, and then every time after that gets more expensive by another 20 gems until suddenly you’re having to pay 200 a time, every time you want to save.

I mean, granted you will make that money back and then some, as the enemies and Mongos you kill, will give you plenty, as will the chests and even the gems that are dotted all over Noctum, but it just feels a little too unnecessary, much like the whimsical designs you’ll encounter in some locations of the game. Sure Nightmare Boy has some good ideas and things it does do great, but with all the performance issues and even localised texts that could have done some work to ensure the game’s narrative was at least grammatically correct, it’s also a game littered with faults that become harder and harder to look away from the longer you play it, so if you do give it a try and feel as If you don’t hate it, it simply means you haven’t played it long enough, because Nightmare Boy is not the winning game it deserved to be and is nothing more than the solid representation of what poor Metroidvania games on Switch are like.

When I first started playing Nightmare Boy, I really liked it. It felt smooth, it was a Metroidvania I could get behind, as the soundtrack and exploration is pretty solid, but things soon started to fall apart. With too many issues at play, my enjoyment had ceased and I found myself resent the game during the last two hours it took me to reach the final battle and beat the game once and for all and having spoken to some other Nightmare Boy reviewers, I wasn’t the only one to experience the issues I did. So unless you’re willing to look past the many issues and ridiculous difficulty, Nightmare Boy is not a game you should purchase, as there are other better put together Metroidvanias such as SteamWorld Dig 2 and Axiom Verge, available on Switch that are worth your time if you have yet to play them.