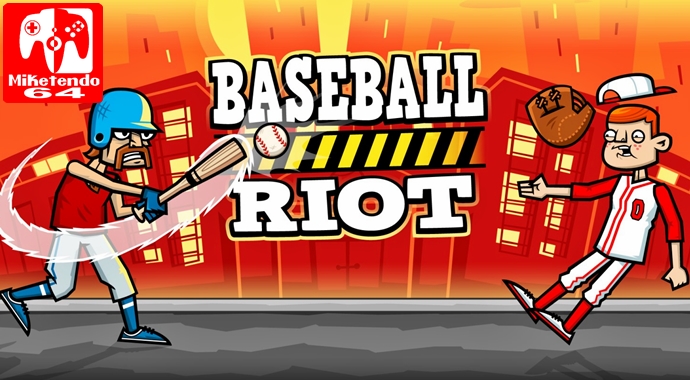 Thinking that tennis wasn’t enough of a riot for anyone, developers 10tons are back, with baseball – a sport known far more for its riotous behaviour than stuffy old tennis. A direct sequel to Tennis in the Face (who ever would have guessed this would happen), Baseball Riot is hardly different, just a little more challenging than its racquet and ball predecessor.

The story is eerily similar to that of Tennis in the Face, but instead of a former tennis pro who is taking his revenge on the evil Explodz Inc. it is a baseball star whose career has taken a turn for the worse after a run in with the explosive energy drink – this time, it’s personal… Again. You play as Gabe Carpaccio, who embarks on a crusade to save his former teammates from the evil clutches of everyone’s favourite devilish drink, Explodz. This means you’ll spend the next few hours hitting balls at the corrupt masses who are in favour of the aspartame and isotonic properties of Explodz (seemingly disregarding its literally explosive assets).

Each level sees you placed somewhere in a 2D plane, with enemies, obstacles (such as walls, crunched up blocks of metal and glass) surrounding you. It is your job, as the saviour of the world – at least until the third game, Cricket to the Crotch, launches later this year – to smack baseballs into your enemies and… collect stars. The biggest introduction in Baseball Riot over Tennis in the Face is the introduction of a three star system, but this doesn’t work the same as you’re probably thinking. Rather than being awarded stars based on your performance, you have to collect them by hitting them with a baseball. It’s a smart system, but there is an issue with it – they use it to stifle your progress.

Baseball Riot is divided into quite a few worlds (there are over 100 levels to riot through), and to reach the next one, you have to collect thirty stars, which is easy to begin with, but it does become a bit of chore. A game shouldn’t halt progression based on the collection of extras (it’s okay in collectathon titles such as Banjo Kazooie, but not my favourite), it doesn’t create an enjoyable atmosphere. “I’ve finished every level of the world, time to move on to the next… Oh, wait, I can’t? I didn’t collect enough stars. I thought those were just extras?” Being forced to collect extras in order to carry on your progress just isn’t fun, especially when it’s fairly difficult to collect them. A game should award you for collecting everything, sure, but not stop you playing it because you only did the level and didn’t bother to collect everything.

Unlike Tennis in the Face, Baseball Riot actually carries some challenge. In the last three worlds, you’ll struggle to collect the stars required to move on when your enemies take multiple hits to down and everything is hiding behind glass that eats up your limited shots. You are awarded with an extra ball to use when you down three enemies at once, but this too, is difficult in the latter stages of the game. I appreciated the extra challenge, but at times it did feel like a level was impossible unless you got your aim exactly right with pin-point accuracy. Even then, there seemed to be a random nature to your shots. Quite often I would find a spot where everything should line up well to complete a level with a couple of baseballs, but this would be scuppered by the baseball bouncing less, more, or even at a different angle, even if my aim was exactly the same each time.

Despite this, clearing a frustrating level always felt satisfying (as any good puzzle game will). I too enjoyed the animations and ragdoll physics of downed enemies, which sometimes got a small laugh from me. When the game worked well, without the seemingly random nature of your hits and the ragdoll physics spoiling your fun, it could be fun, with enough challenge to get you scratching your head. Clearing a level with just one shot was always a great feeling. The story, however, was throwaway, replete with lame images of newspapers and the overuse of the word “Explodz”, which isn’t an easy word to digest. The throwaway plot doesn’t take anything away from the game, however, as it is just there to give a reason for the whole thing.

Seeing an enemy fly in slow-motion as they’ve been smacked in the face by a baseball is quite amusing, but the enemies themselves, just as in Tennis in the Face just aren’t as funny as they think they are. Oh look, it’s a hipster with a sword and shield. Hey, smack some sense into these fans, who aren’t exactly representative of sports fans. The designs aren’t great, but the art-style as a whole looks like a poor man’s Cartoon Network piece from the early 2000s. It just looks a little… ugly and bland. Nothing to write home about, that’s for sure.

I had fun with Baseball Riot, but I didn’t have a riot. There are moments when the amusing physics puzzler works, and there are times where the random nature of the physics, the enforced collecting and poor art-direction just did not do anything for me. Baseball Riot is decent enough and carries a nice challenge, but I really wish it didn’t force me into collecting stars that I really shouldn’t have needed to bother with unless I wanted to. There are better physics-based puzzle games out there (10tons own King Oddball is better than this), but those looking for a decent enough puzzler to waste a few hours with could do worse than Baseball Riot.

You’ll have some fun with Baseball Riot, but it isn’t anything to write home about. The physics-based puzzler is decent enough to whittle away a few hours, but you will find some of its design choices frustrating. The physics themselves seem to behave in ways you won’t expect, appearing totally random at times – especially annoying when a lot of stages seem to promote absolute precision from your aim. You will be forced to collect stars that should only act as extras on top of completing stages, for high-score purposes. You won’t love the art-style, either, but Baseball Riot isn’t too bad.