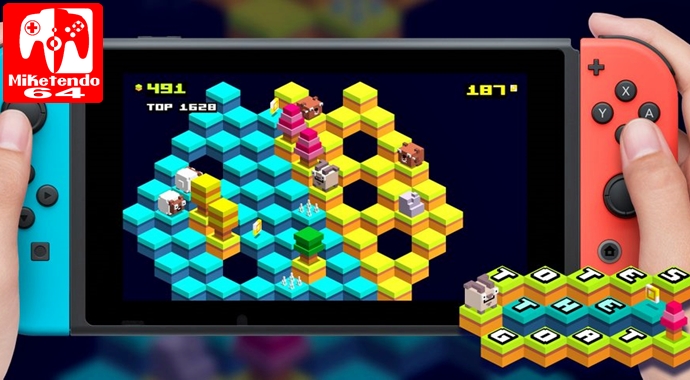 In life, everyone gets the start somewhere and for Atooi, the company lead by developer Jools Watsham, the start was Totes the Goat.

Totes the Goat was the first game released by the newly formed Atooi in 2015 and with the developer making their move on Switch with Mutant Mudds Collection already available and plenty of games on their way this year, which includes Xeodrifter, Jools Watsham has revealed on Twitter that a Switch port for Totes the Goat is in the works, and upon being asked, the Switch version, although it is a “straightforward port,” will include some new characters, but no spoilers! The identity of these characters are being kept secret for the launch as evidenced via the tweets below:

Adding some additional characters. Other than that a fairly straightforward port really.

Totes the Goat will be submitted to lot check very soon, so although a release month wasn’t specified, it certainly looks like a February/March release could be on the cards, but if you have no idea what Totes the Goat even is, maybe the following overview can sort that out for you:

An Endless Journey of Jumps!:

Totes the Goat is the debut game from newly formed mobile studio, Atooi – led by industry veteran Jools Watsham. A charming arcade experience with vibrant voxel art and easy-to-use swipe controls, Totes the Goat will have you happily hopping down a cliff like a kid. Leap from platform to platform – bringing each one back to life – while avoiding hazardous Wily Wolves, Cranky Crows, and Bully Bears – oh my! Once a cliff tier is fully rejuvenated, hop down the cliff to the next tier for an endless journey of jumps! How low can you leap? How totes is your goat?

Just as soon as more good news, like a release date comes in, we’ll be sure to let you know.