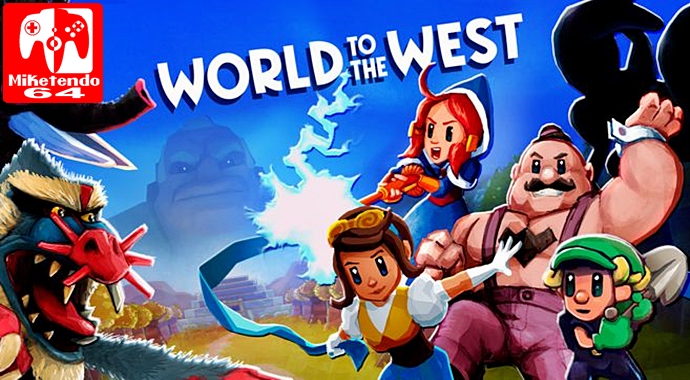 Once you head West, there’s no coming back!

As one of the first games first teased/considered for the Nintendo Switch (known as the NX at the time our interview with Rain Games took place back in 2016,) Rain Games’ World to the West is a game that’s been on our radar for a long time. It was a game we knew we just had to cover as much as we could and absolutely had to review and now thanks to a Switch release for both it and its predecessor game Teslagrad, the time has come to bring our little journey to the World to the West, to an end.

So to begin, what is World to the West is a follow-up game to Rain Games’ rather successful Teslagrad, except instead of being a sequel, it is simply a game sent in the same universe, which Teslagrad took place in, just located somewhere else and presumably to the West. As well as a different location though, World to the West differs in a whole range of ways. While things like the art style and music is similar, but much, much better this time around. There’s also four differing protagonists and the 2D side-scrolling as see in Teslgrad has since been replaced with 3D visuals, a top-down perspective and a world that is much more open and just itching to be explored.

But what of the story? Well, for a game that can take you anywhere between 8-10 hours to complete at least, and is comprised of 9 Chapters with the 9th Chapter actually being as big as Chapters 1-8 as 9 is where the World to the West really opens up, the story and gameplay is one that maintains a steady pace and will keep you entertained throughout. It is the story of Lumina, a Teslamancer who is the victim of a teleportation gone bad, finding herself in a very bizarre land. It’s also the telling of the courageous Teri, a relic hunter of sorts who winds up being the victim of a job gone bad.

Not to be outdone though, World to the West is also the epic telling of the boy named Knaus who rebelled. Once just a child working in a mine of the moon, which is clearly a lie the older kids are telling the younger ones, but don’t worry, once exiled from the colony, Knaus does return with a vengeance. Then lastly there is Lord Clonington, a strongman aristocrat who arrives in town via a boat, with a single mission, to show off his superior awesomeness. From possess to flat-out comments about how great he is, Lord Clonington is very vain and will take any and opportunity to brag about himself, so if you’re hoping he’d read some mysterious text for you, he’d much rather praise himself.

Alone they are four individuals, embarking on singular pursuits, but in reality, their little journeys are but the beginning of a much larger one, as only together will these four unlikely heroes of Legend, will be able to band together and stop a common enemy from achieving their goal, via the aid of a certain Tenoc who knows a whole lot more than she lets on at the beginning, but has forgotten some of the more important details. I do realise I could elaborate on the story even further and do things like name the enemy and such, but while World to the West is not a new release in 2018, it only first released in 2017 so as such, this review will be pretty spoiler free as there are many gamers who have yet to try out this delightful tale.

In terms of gameplay, it really depends on each character, as they come with different skill-sets. They can all run and walk, but with his brute strength, Clonington can charge like a bull and knock down doors, but with the right power-up (cufflinks,) he can even smash through boulders. Knaus can use his shovel to dig a hole where the ground is soft, jump into it and move round to evade enemies, or access areas that are normally denied to him due to rocks being in his path. He can also wield an item that will let him skate across water and ground, thanks to ice his new boots can create. He can also blow rocks and boulders up once he is able to secure dynamite that can just so happen to be whacked with his shovel in the direction of enemies like Grues.

As for the likes of Teri, or Miss Teri as Knaus calls her, she can run, she whip enemies with her scarf and even go on to control them and carry out her bidding, even if that bidding is just to act as a means of transportation as the larger enemies can be ridden, but then there is Lumina. For a young Teslamancer. Who has teleported into a bizarre world most foreign to her, the likes of her kind have travelled there in the past, as her grandfather Solomon had led an expedition there and left stone monuments, detailing their exploits. Being a Teslamancer, Lumina wields a staff that can shoot balls of electricity, perform charge shots and even give power to where power is needed to open doors and even raise the platforms she’s standing on. Her best ability however, is her dash move, which actually makes her teleport in the direction she’s running. She can’t teleport through rocks or go that far, but she can phase through gates, go from one ledge to the other.

With a great number of differences between the four characters and a different way of progressing, since Lord Clonington is the only one who can actually climb, with Knaus being the only crawler, nearly the whole world of World to the West has been created in such a way that all four characters are able to progress through it, at least so they can do all the important stuff to the story as most of the puzzles in the game are specific to certain skill-sets of a singular character, with some requiring just a little help from the other and yes, figuring these puzzles will help you out in the long run, as each character has a different quantity of life diamonds and the various puzzles can help expand them. In the first hours of the game, more life isn’t really all that important, but when the boss battles start, the more life you have, the better.

Extra life isn’t the only collectable however, as there are 36 scrolls like those seen in Teslagrad and no, collecting them all is not required for the True Ending of the game, but they are there for the die-hard gamers to collect if they want them. In addition to more life and scrolls though, there are also chests littered all over, but you won’t have to make a habit out of collecting every single last one of them, as the majority only hold currency that is just as easily collected from deleted monsters and doesn’t really serve that much of a purpose in World to the West. In fact, the lack of a true system that makes use of the currency is one of the biggest faults World to the West has, with the others being Totem Poles that can be found all over. While the Totems can be used to auto save your progress and swap between the four characters, each totem must be access by each character and I’m sorry, but I detest that.

I can understand not being able to swap out between characters whenever you want during gameplay, as that would drastically shorten gameplay time, especially in Chapter 9 when all four characters are finally together and can be used more freely than in the previous chapters, but I would have liked World to the West even more so, if reaching a new Totem unlocked it for every character. Sure, it would have sped up completing the game, like being able to swap between all four would have done, it would only really reduce it by an hour or so and remove one of the most hindering aspects World to the West possesses and actually allow it to be even more of an open game as it means the puzzle you were forced to leave behind, because you were the wrong character, you can now use the Totem you just reached, to become exactly who you need to be and take care of that obstacle and claim your prize, because without this and the lack of map markers to highlight character specific puzzles, you are forced to rely on nothing more than your memory, to remember who needs to go where and do what.

Something the game actually tries to do to counter this though, is it has an NPC who will sell you maps that will mark the locations of treasure and chests on your World map. It’s a nice touch, but first you have to find the seller, be willing to part with your cash and be satisfied with this feature as opposed to map markers that would have been better. So it’s good thing that World to the West does make up for its issues by actually being a downright great game with some very minor frame-rate issues, because the Switch port does justify the long wait and it is one of the better games to pick up in 2018!

If you’re looking for a Zelda game on Switch that isn’t Breath of the Wild or the Zelda-like Oceanhorn: Monster of Uncharted Seas, World to the West is to A Link Between Worlds, as Blossom Tales: The Sleeping King, is to A Link to the Past. They are indie created games that come with a rich design and packaged with nothing but love, exploration, good writing and lots of puzzles. World to the West is not everyone’s cup of tea as die-hard fans of Teslagrad make down upon it, but even with its faults, World to the West is a work of art that is meant to be purchased, played and enjoyed, in exactly that order. So even if you dislike it, there is a high chance someone in your household who will enjoy it and thank you for getting it for them/recommending it.

One thought on “[Review] World to the West (Nintendo Switch)”