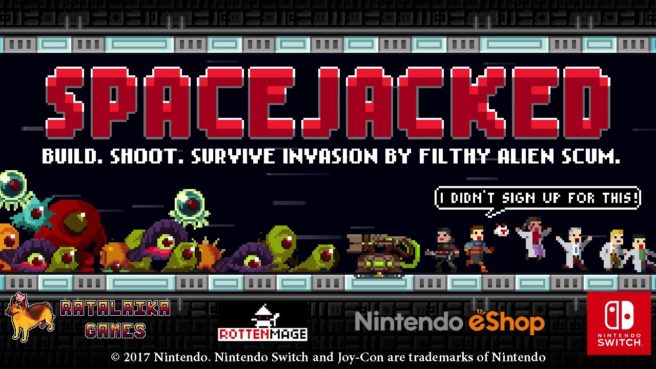 Our good friends over at Ratalakia Games are joining up with Rotten Mage to bring their game Spacejacked over to the Nintendo Switch and it is suspected to come later this year. If you are looking for a “Super fast-paced arcade tower defense” game then Spacejacked could be the game for you. Your mission in the game is to defend your spaceship against aliens planning to overrun it before you can make the jump to hyperspace.

Below we have the overview and a trailer for the game.

Can YOU, Space Technician ace Dave Paprovsky, defend your spaceship against a relentless horde of aliens? Expect arena shooter action, tower defense tension and multi-arena madness! Spacejacked is a super fast-paced ARCADE TOWER-DEFENSE. Play as Dave, a lone technician tasked with protecting his spaceship from being overrun by aliens while it prepares to warp into hyperspace. Players who seek to experience a blend of action shooter and tower defense will enjoy this game!

Features:
– Defend both the ground and ceiling! No spot is safe from alien scum!
– Shoot up hordes of aliens with your trusty blaster, and when that isn’t enough, build turrets and shoot some more!
– Experience crazy fast navigation between arenas via gravity flipping and teleporters as you defend multiple arenas simultaneously.
– Play through the Story Mode filled with quirky characters over the course of 2 major story arcs.
– Enjoy the even faster-paced Endless Mode and compete for high-score with friends.
– Conquer the Challenge Mode with demanding set-pieces only fit for the most hardcore.
– Rescue scientists and unlock weapon upgrades.

If you would like to know more about Spacejacked, then be sure to stop by on Twitter as we are conducting an AMA (Ask Me Anything) with Adrian Vega of Ratalaika Games which begins at 18:00 CET (12pm EST/ 9am PST). You can find the AMA by using the Hashtag #Ratalaika2018