[Editorial] Hyrule Warriors on Switch will not be Complete without the Champions of Breath of the Wild! 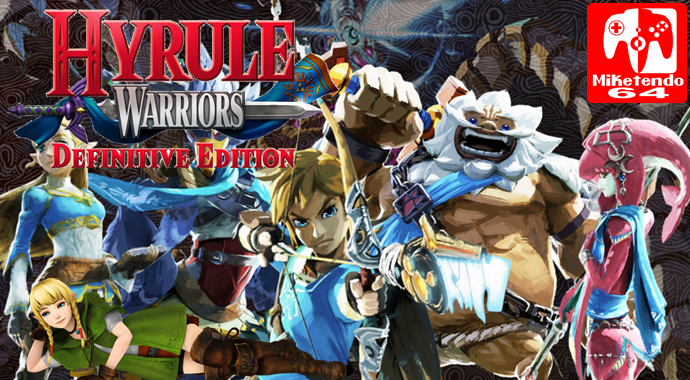 If Good Things really do come in threes than the latest instalment of Hyrule Warriors should be an absolute beast!

In 2014, the Wii U saw the release of Hyrule Warriors and for a game that was first hated because no one wanted to see Link go from Zelda to Warriors, it soon came to the Nintendo 3DS and New 3DS under the added name of Legends and now in 2018, a definitive edition is coming to the Nintendo Switch and it has me very conflicted. I was most definitely not expecting it to get revealed via a Nintendo Direct Mini and although I was greatly excited to see it be shown off, as I had hoped a port might happen now that Fire Emblem Warriors is out, I actually felt a little gutted it wasn’t a Hyrule Warriors 2 being shown off.

Don’t get me wrong, I absolutely love Hyrule Warriors as it was the reason why I got a Wii U, with Legends being the reason why I got a New Nintendo 3DS XL, but with Hyrule Warriors turning 4 nearing to the end of this year, I can’t help but feel a little sad that a sequel wasn’t revealed. I love the Hyrule Warriors games and I actually do like Lana and Cia and would have liked to see their story continue, or at least find out what did become of them after the events of the added levels that come packaged with Legends.

Still, I’m not upset about getting a port. I know full well that Hyrule Warriors Definitive Edition will be a day one purchase for me, as the Breath of the Wild Link and Zelda costumes are clearly a nice touch and the Fairies of the My Fairy system have never looked better, but as a game that is called the Definitive Edition, I’m hoping there is more to it than what we know already. A HD version of Legends is one thing, but I hope DLC is being considered for this game as the Champions from The Legend of Zelda: Breath of the Wild would fit in perfectly and you would only actually have to add 2 of them as new fighters as Mipha and Daruk could simply be skins for Princess Ruto and Darunia retrospectively.

I know it would be unlikely we get these characters, but since we didn’t get the chance to play as the,, like we had hoped we would thanks to the Champion’s Ballad DLC for Breath of the Wild, this would be one way for Nintendo to make it up to us and Nintendo is the key word here! Although Koei Tecmo are involved, it is Nintendo who call the shots with both Hyrule Warriors and Fire Emblem Warriors, so if they desire to go the fan service route and include a DLC pack, or a free update that consists of the Champions and their associated weapons, then it is entirely their decision to make. Much like how it is their decision if they want to include a Breath of the Wild map to adventure mode, complete with a Great Plateau level.

Should such a thing happen, it really would be fan service on a whole other level and really help give players an incentive to double or triple dip, as Switch games are expensive already. Just take a look at Pokkén Tournament, it’s not the cheapest port in the world and now it has some DLC that’s a tad overprices that should have either been cheaper to start with, or added as part of free updates like how ARMS and Splatoon 2 get free updates. Although, me being the way I am, if we did get the Champions, which would be a great thing on their own, even without their associated Breath of the Wild weapon and other new content, I just know I’d harbour a desire for Linkle to get a new outfit as well.

I am fully aware of the fact that Linkle is not Link, she’s no Hero and is not in Breath of the Wild, but she is a major kickarse character, who swiftly became my second favourite Warrior to play as (first after Link) and if Link and Zelda can both get a Breath of the Wild costume, then I’d hope to hell she would get one too, as she already got a lot of costumes similar to the ones Link got anyway and it would be another nice little touch that Nintendo are well known for doing. Of course, it wouldn’t be a deal breaker if she didn’t get one, but Linkle does look good in blue and with this version of the game being the Definitive Edition, although I will settle for the version of the game we currently know it to be, I would be a lot happier knowing a lot more about it and knowing it has even more content than the previous versions, since both Wii U and 3DS versions of the game, did have their own series of DLC.

The good news though, is that if there is DLC, we will find out much closer to launch when Nintendo host a Nintendo Direct in April (educated guess as there’s more likely to be one or even two in February, with one being a normal Direct and the other being a Kirby Star Allies Direct.) Breath of the Wild and Xenoblade Chronicles 2 were both revealed to have DLC long before they even released and if Hyrule Warriors Definitive Edition is to have DLC, I’m sure it will follow in the path the others have set for me. But what about you? Is Hyrule Warriors already the definitive edition you wished it would be, or are you like me and would love to see more in return for our buck, other than what we’ve seen now? It’s a fair question and only one that you can answer and if you’re in an answering mode, what about an answer to this one: “Should Xenoblade be the next Nintendo IP to get the Warriors treatment?” Xenoblade Warriors would be pretty lit!

Okay, we've thought about and we think we've come up with the next Nintendo IP that should be a Warriors game. (Hope you're listening @koeitecmoeurope.) It's not Kirby, it's Smash, or even Mario, but #XenobladeWarriors. Think about it. It would be incredible! pic.twitter.com/GkWVl6FGC9