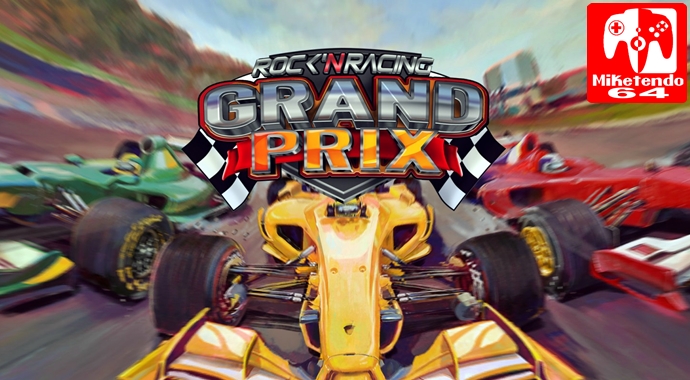 Have you ever wanted to play a racing game that’s almost impossible to control and never gives you any tutorials for any of its gameplay quirks? If the answer is yes, then Grand Prix Rock ‘N Racing (or Rock ‘N Racing Grand Prix, whatever you want to call it) is definitely for you.

Grand Prix Rock ‘N Racing follows a simple concept: “What if we took rock music and played it over an old-school arcade racing game?” EnjoyUp, you truly are the king of kings. I imagine this is how the next conversation went: “How about, though, we make it so the cars feel like they’re drifting through treacle? Wouldn’t that be fun and totally not a horrible mistake?” This is a game that substitutes fun for dull gameplay with a little frustration mixed in for good measure. Ah, bliss.

You are tasked with winning a Formula 1 championship that consists of ten races. The thrills are immense, with plenty of crashing, drifting through corners and dangerous overtaking manoeuvres, or at least, I wish they were. Each race takes place in a different country (with flags and vaguely stereotypical views to help you realise this) and sees you face off against the same nine drivers every time. This isn’t an issue, and after the fourth season rolls by, you will have built up rivalries with particular drivers. What this is missing is the personality of the classic Micro Machines games, who put a face to each name, making things far more personal and therefore, emotional. Indeed, Grand Prix Rock ‘N Racing is about as bland as some gruel that hasn’t been cooked yet.

An excited voice shouts at you from the heavens as you play, but even his constantly repeated lines of vigour and joy won’t help lift your spirits, no matter how funny the delivery may seem on first listen. It doesn’t matter how many times you repeat “this race is on fire!” we still won’t believe you. In your first season where the car can barely move at speed, turn or brake, you will feel like turning the game off and never touching it again. I felt like this, anyway. You’ll constantly be finishing last (or ninth if a fellow driver crashes out), having to deal with AI that seemingly wants to crash into you after they’ve already finished the race, dodgy resetting mechanics and did I mention the handling?

Let’s explain the gameplay in greater detail. After finishing a race, you are awarded with tokens, the amount rising when you perform better. You can spend these tokens on upgrading your car in areas such as top speed, handling and boost (more on that later). For your first race, you are given a car that has nothing upgraded and it feels sluggish, doesn’t like taking corners at all and will see you finish dead last most of the time. You’ll crash a lot and the game never takes time to teach you its clearly absurd handling mechanics. If you drift too much, you’ll end up in the air, I understand that this is to do with the wheels locking, but it is never explained how to combat against this – it happens all the time.

When you crash, you can reset your car’s position to somewhere that vaguely represents where you crashed. As long as there is a black circle placed around your car, pressing in the left analogue stick will reset your position. A nice idea, sure, but when the game can never make up its mind as to how quickly you can reset your position it doesn’t work that well in execution. Oh well, at least the car will be better when it’s upgraded. Wrong. Your car isn’t better when it’s fully upgraded, it is just different. Sure, you’ll reach higher top speeds and the handling will feel a little tighter, but these are as much a curse as they are a help. You’ll find yourself trumping the competition in the overly easy opening USA track, but as soon as those corners become tighter the higher speeds and stronger handling didn’t really help.

It took me until the fourth season to figure out exactly how to play the game. Like a tortoise. Slow and steady may not win you each race, but across ten tracks with seemingly random competitor times and board placements, you’ll likely finish on top with a fully upgraded car if you practically slow to a stop before taking a corner. It’s not the most thrilling way to play a racing game, but anything to stop the ludicrous amounts of wheel locking and spinning out of control at what would be a reasonable speed to take a corner in another racing sim is good to know. It would have been nice to learn about the boost before playing in earnest, too. The boost is a tricky thing to pin down. You build it up by braking (oddly) and can unleash it by holding the “A” button. I say unleash, but like everything else in the game, the boost feature is dramatically disappointing.

Until you have significantly upgraded the boost, you won’t see it making any difference to your overall speed. When it is fully upgraded, you will move faster, but it will make the screen judder even more than it does at normal speeds (the game runs horribly despite its simple graphics and there is always a judder to the screen and poor texture fill-rate). Here’s something that the game never tells you. If you boost too much, your car will actually fly into the air, making you crash in an incredibly slow fashion with dodgy physics slowing you down extremely if you spin in the air, unlike real Formula 1 driving. All this nonsense and you have a soundtrack that wouldn’t sound out of place in a Sonic Adventure with all the joy sucked out of it. Grand Prix Rock ‘N Racing simply isn’t worth your time or money.

Amazing! Wow! This race is on fire! These are phrases that I wouldn’t use to describe my thoughts on Grand Prix Rock ‘N Racing. You go from not being able to turn your car without hitting a wall to not being able to turn your car without spinning into the air. The handling is tremendously awful and it isn’t helped by dull track designs and an overly enthusiastic commentator who does his best to make it all seem far more exciting than it is, but had far too few lines to read. If you really want rock and racing, stick some racing on the TV and play some good rock in the background, not the cheesy, uninspired stuff that’s on display here.