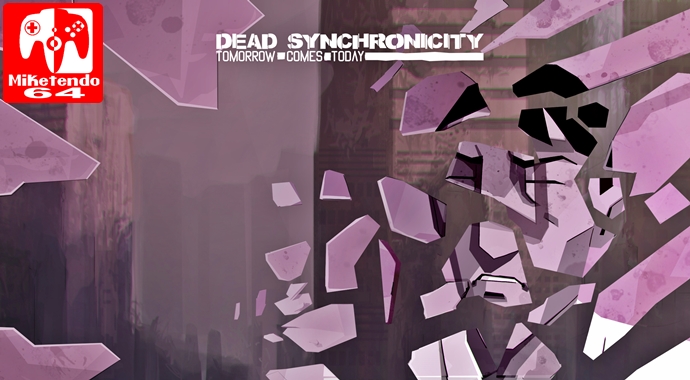 Point-and-click games have been around for a long time. Their stories can vary dramatically, but they all aim to deliver an amazing experience that you will remember (I am looking at you, The Walking Dead: The Telltale series and The Valiant Hearts).

Dead Synchronicity looks to tell an amazing personal story involving a mystery event that involves time. As a person who loves time manipulation stories and having binge-watched Dark in one day, I have to say that I had high hopes when reviewing Dead Synchronicity.

Dead Synchronicity: Tomorrow Comes Today is a game developed by Fictiorama Studios, after the project was funded on Kickstarter and launched in 2015 for Steam, Android and iOS and then in 2017 for the PS4 and Nintendo Switch. It is the first part of a series called Dead Synchronicity, and will be followed by Dead Synchronicity: The Underground Highways, which at this time, remains without a launch date.

Visually, the game uses a unique expressionist drawn 2D graphics to depict the brutality and the remains of this damaged world. Personally, I think that it was an excellent choice to represent this mature content without the necessity to do it with more realistic and 3D graphics, as even still images can be their fair share of gruesome. My favorite part of the graphics, though, is that each character design is unique, easy to recognize and stand out as unique individuals that you can empathize with.

In an effort to complement the visuals, the game features a soundtrack designed for the game that helps create an atmosphere of a desolate place that is filled with hopelessness. It is consistent throughout all of Dead Synchronicity and fits well with the environment in which they are used. The sound effects used, also help reflect the action that you command Michael to do. The worst sounds though that Dead Synchronicity has, is the voice acting. It’s not great, but it is bearable to a point.

As for controls, as with any point-and-click game, you have to highlight a specific part of the picture and click. This is done in 2 ways: 1) you use the left and/or right stick to move the cursor freely around the screen and select anywhere you want and 2) you can use the directional buttons to select between the highlight points available in the screen.

I ended up preferring to use the directional buttons as they are easy to use, although a mix of both modes is necessary as the directional buttons can only select highlight points that are visible, so sometimes you need to click on an unimportant point to make Michael move. Finally, the A, B, X and Y button are used for selecting/picking, returning/dropping, opening your “suitcase”, and looking, respectively. In short, I like this control options as they fit very well when playing on the TV and in Portable mode.

However, I would have also liked if they kept the ability to use touch controls when in Portable mode as that would have increased the experience. Hopefully, the developers or BadLand Games will add it as part of an update. Another thing missing in Dead Synchronicity though, is the lack of HD Rumble. The mere inclusion would have gone on to make the Switch version of Dead Synchronicity: Tomorrow Never Comes, very special indeed.

Storywise, it starts with your character waking up, after having been passed out for a couple of weeks and the only thing that he remembers is that his name is Michael. He lost consciousness and his memory, after an event called “Great Wave” hit the world and brought with it a disease that makes people talk with the dead, daydream that they are in different locations and after some time, die by dissolving. The story then leads you on a path that goes from world related to Michael’s personal life and ends up being very relatable, so there is some good storytelling at work here.

It’s not all about Michael however, as from the moment you start the game, you are introduced to a bunch of interesting characters, such as Rod, Colin, The Hunter and Rose. Fictiorama really does a good job of trying to make you care about these characters and their relatable mundane problems, even though we aren’t going through the “great wave”. Not to make Dead Synchronicity sound too perfect  though, some of the instances around the characters are a little predictable, even before the game tells you, but for me, it didn’t attract from my experience at all and I especially liked when one twist saw the game progress in a way I wasn’t expecting it to.

In terms of the world set up, it is well-thought, as all that we see is a very possible scenario in case such a catastrophe like the “great wave” were to happen in our reality. From refugee camps, mercenaries and army controlling access to food, water and other supplies, the despair and chaos is keenly felt as Michael and everyone else, does what they can to survive. Finally, the further down the rabbit hole you go, the story ends up making great use of a different idea of time and its concept, in a way that not so many shows use, which reminded me a little of the crazy time story from the TV Show “Dark”.

But it is also when dealing with time in the gameplay that lies my biggest problem. For most time of the game’s progression, the problems that you have to face can be found in any game. Using a strange object to fix, change or create another, showing an object to a person are the basic gameplay available in most other point-and-click games and are present in the entire game. I don’t have a problem with that, with a few exceptions where I didn’t have the slightest clue on how to progress as what I had to do wasn’t very clear and I had to keep trying until I got it. What I had problem with, is that the developers introduce time in a part of the gameplay to solve a problem, but it is too late into the game that you only get to use it in a particular segment to solve one problem. I guess they’re keeping it for the second episode, (Dead Synchronicity: The Underground Highways,) but I wish they added it earlier in Dead Synchronicity: Tomorrow Comes Today, as a variation to the usual point-and-click formula as it would have changed the game in a great way.

Dead Synchronicity: Tomorrow Never Comes, is a good starting piece in the Dead Synchronicity series and is game easy to recommend to people that like catastrophe, time stories, characters with realistic motivations and point-and-clicks. It may not offer anything entirely original gameplay-wise, but it will keep you entertained for the whole journey and that’s exactly what a gamer could want from a video game belonging to one of their favourite genres.