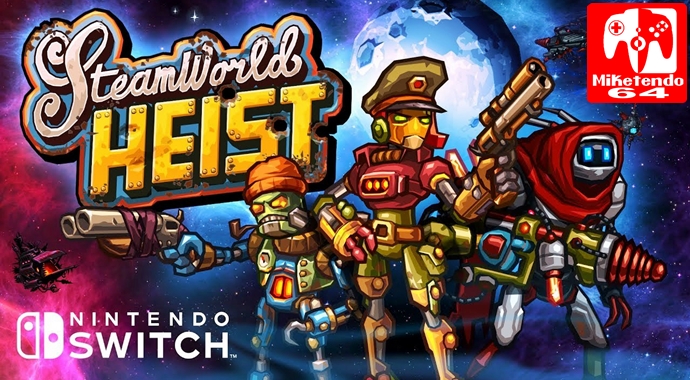 SteamWorld fans, it is time to rejoice.

In the event that one SteamWorld game wasn’t enough on the Nintendo Switch, later on this month SteamWorld Dig 2 will be joined by SteamWorld Heist. For a long time it has been theorised the previous games would be ported and lo and behold, one of them is, so there’s hope for a Dig 1 reunion yet! SteamWorld Heist: Ultimate Edition will release digitally on December 28th and the reason behind its Ultimate Edition name is because it comes packed with the original game, the all DLC, which includes the Outsider and even touch-screen controls.

Having spoken to the Image & From upon this news finally going public, other than it being a game loved by many and a successful, one reason for bringing the game over to the Switch, is because of its multiple connections to SteamWorld Dig 2 (shattered earth and a certain Fen being two of them.) Anyhow, the official announcement for SteamWorld Heist: Ultimate Edition can be seen here, followed by a trailer:

In SteamWorld Heist, you command space pirates in a series of epic tactical shootouts. Strategy fans will feel right at home and get hooked on the game’s unique action twist. By aiming your weapons yourself you’ll shoot bullet-bouncing trick shots with unrivaled precision. No need to rely on chance to take down your foes!

A few centuries after SteamWorld Dig 2, it’s up to a hearty crew of steambots to board, loot and shoot their way through enemy spaceships. With you as their captain! Take on the challenges of the vast frontier by upgrading your recruits with unique abilities, weapons — and even stylish hats!

SteamWorld Heist: Ultimate Edition comes with extra content previously only available as DLC. Including a mysterious ally and a shipload of weapons, upgrades, hats, and missions. Accompanied by a catchy soundtrack by Steam Powered Giraffe, you’re in for an adventure that’s out of this world.

What are you waiting for? Prepare for boarding!

Due to the fact “…and more!” is a little vague, instead of posting this news immediately, we wanted to see if we could get an elaborated statement on what the and more could entail and this is the response we got:

Brjánn Sigurgeirsson: “The Switch version of SteamWorld Heist really IS the Ultimate Edition – in more ways than one! The package contains every little extra add-on we’ve ever made for the game, and it’s playable any way you want. You can play it with the Pro Controller in front of your TV or use the Joy-Cons when you’re on the go. But for that extra hat-shot precision you can also use the touch screen.

The boys and girls also tell me there’s an extra pun here and there thrown into the game. I guess you need to be Swedish to understand the significance of that, but we here in Gothenburg are abnormally impressed by good puns. I guess you could say we’re usually pretty punimpressed.”

Having loved the game back when it released last year for the Wii U, and given it a glowing recommendation in our review, we are delighted to reveal we have already got a review key for SteamWorld Heist: Ultimate Edition. The icon is beautiful and we look forwards to sharing our review with all of you for when the time comes!