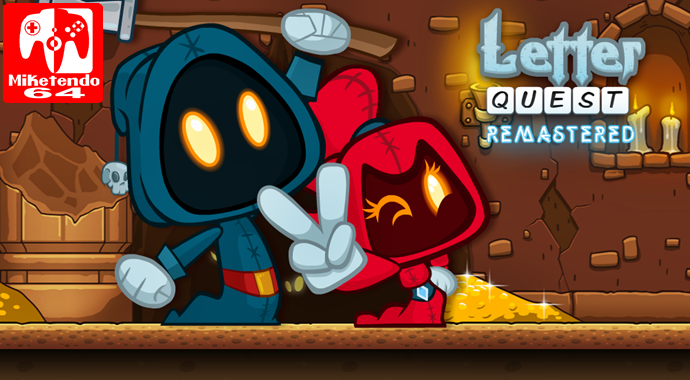 Most people use their time with video games as a means to escape from their studies, work, a crazy routine and even their own over-thinking mind. Others though, they tend to like a good puzzle game, a game that tests their knowledge on a specific topic and even games that are classed as being educational. As for where Letter Quest Remastered falls, it tries to be an amazing game in the latter, while borrowing elements from RPG games that appeal to the former. Does it succeed? Let’s find out!

Developed by Bacon Bandit Games, Letter Quest Remastered was originally released on mobile devices and PC as Letter Quest: Grimm’s Journey. Since then the game got a remastered rendition that introduced a couple of new aspects and came to platforms such as Wii U, Steam, PS4, PS Vita, Xbox One and, last month, the Nintendo Switch.

Graphically, Letter Quest Remastered is made up of hand-drawn art that fits the game nicely. Granted, nothing ever truly stands out, but it looks nice and fits the action, but it’s not without some faults. While I did personally like the design of the 2 main characters, I felt some enemies felt lacking in comparison. What does stand out in the game’s graphics overall though, is that in the remastered version, every character is animated and the animation does help to convey the visual and the idea that the world of Letter Quest Remastered, is alive, moving, never still.

In keeping with visuals, Letter Quest Remastered’s HUD is on par with the rest of the visuals, being very easy to understand and use, with crucial information visible at any moment. The only information that is small, but still understandable in handheld mode, are the monster descriptions and the last words/meaning, located on the bottom right and bottom left, respectively. As for background music, Letter Quest Remastered presents you with 2 soundtracks. One that was made for the remastered edition that presents a more electronic sound, which if you stop and listen, doesn’t feel like it fits in well with the game, but it never bothered me while I was playing. As for the other soundtrack, it’s the one made for the original game and personally feels more adventurous and overall ties better into the game.

As far as a story goes, the story is basic, straight to the point, which only makes it pretty irrelevant. Your character, Grimm, wants pizza and the game is essentially his journey to go get said meal, which is told through 7 comics strips that you unlock as you progress through the story levels, and I just I couldn’t care less as each time one popped up. Sure I read it and continued on, but considering Letter Quest Remastered is stated as being something of a turn-based RPG, it is a bit disappointing that the story isn’t as well developed as it could have been to justify the classification.

Gameplay-wise, the core game is simple: you are given 15 random letters on the bottom of the screen and you have to form words to attack. Larger words give more points as well as using less common letters, such as Y, X, W, Z. The rarity of each letter is indicated by small colored balls in the corner of the tile and can be 1 bronze ball, 2 silver balls and 3 gold balls. Later, they introduce some special tiles that change your dynamic by helping or disrupting options and are great to create variety.

My issue with this though, is how the game calculates damage. If you buy an upgrade, it can show how much in the health bar it will reduce, not the actual value. While this helps, it made me feel that the use of less common letters had almost to no impact, making it an unnecessary mechanic and that by creating bigger words and words that respected some conditions are all that matter and when your first language is not English, things can get a little tricky. Also, I do wish the developers would increase the chance the chance of getting vowels, as during one level I was lumbered with 14 consonants and just a single vowel, all because of the game’s random letter select system.

In one of the RPG like manners, Letter Quest Remastered utilises, is having an upgrade/shop system that is based on what you’ll often find in an RPG game. It allows you to choose between which characters you want to play with, what weapon you wish to wield and even displays their stats and perks. Also, the shop allows you to buy potions that can cure or remove dangerous tiles, equip books that will give you different benefits, among other things. From my measure of it, I felt that the system was well thought, as your choices will affect how you play, especially since mastering (and grinding) can be the key to victory in the later stages, or in the harder versions of the stages you’ve beaten already.

Back to gameplay, each level presents 4 different forms, represented by stars: The first in the normal version of the stage and the basic one that you have to complete before facing the other ones. The second one is a time trial, which is the same level, but with a time limit. The third one is a special condition, which is the normal stage with an extra rule, such as you can’t use a certain letter, specific sizes don’t do damage, etc. The final form is unlocked, only if the other three forms are beaten and is again, the same stage as those before it, but now it’s a lot harder and this overall gimmick offers the game the variety that it needed.

On top of the levels, there are 2 other challenges in the story mode has to offer, Quests and Achievements. Both introduce different missions to complete, such as using a certain tile, creating a certain type of word, etc. But the main difference is that quests are important for progress, as they reward you with gems to help you upgrade, while achievements are only there for those looking for that 100% completion, or just to brag.

This game presents you with 2 ways to play it: You can use the normal controller in TV and handheld mode or touch-screen controls in handheld mode. Having played and tested both control versions, I ended up playing with touch control most of the time, as it felt it was much better, especially, for the time trials levels. The controller option is responsive most of the time, but the game occasionally not responded to my inputs with the left analog stick and the A/B/X/Y buttons. My the biggest issue with the control set-up though, is that some of the menus appear to be made to be controlled with a controller while the gameplay is designed and is best played with touch controls in mind. Still, this is an issue that can be fixed with a patch, so here’s hoping we get one.

Finally, as an added mode in the remastered edition, Letter Quest Remastered introduces an Endless Mode, a mode in which as the name suggests, has you face an endless horde of random enemies to see how far you can get. It is a good challenge and a nice way to spend your time, but is best enjoyed by those who have already finished everything the main game offers first.

Letter Quest: Grimm’s Journey Remastered is not a game for those looking for an RPG game with a good or relevant story nor game for everyone. Letter Quest Remastered is for those who like to have their knowledge of the English Language and mental capacity challenged, in a fun way that decently incorporates a few mechanics from RPG games. So if this review is not enough to convince you to buy the game, or put you off, I suggest that you to check out some photos and videos of the game in action and it’s concept, as it could very well be the further verification you need.