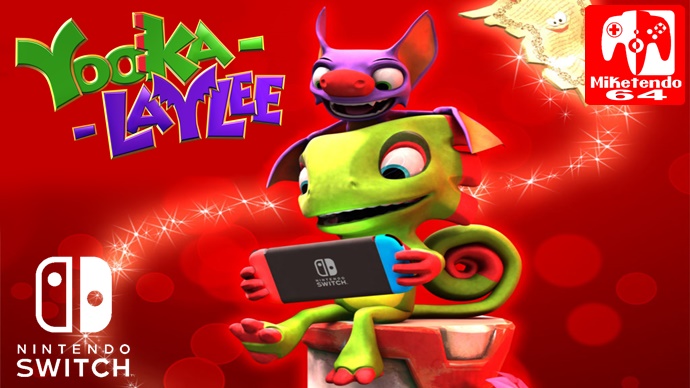 Huzzah! We finally have a release date for Yooka-Laylee coming to Nintendo Switch. I know I am a bit behind with bringing the good news so I apologize for my tardiness but the wait for Playtonic’s Brainchild, Yooka Laylee, will be coming to an end on December 14th. The game development company that is made up of mostly ex-RARE employess took to their company blog and Twitter to announce to the world that we can expect the chameleon and bat duo on Nintendo’s hybrid console before christmas.

They also state that this is the polished version of the game that comes with all the bells and whistles that was patched into the other versions that released on the PS4, Xbox One and PC. It also comes with some Switch exclusives as well. There has been no mention of a physical release as of yet but if it does happen, it will no doubt be next year. Yooka- Laylee will be available to pre-order on the Nintendo Switch eShop on December 7th.

Here is the full statement from Playtonic Games via their blog.

Yooka-Laylee will release for Nintendo Switch on Thursday, December 14!

… Phew! That felt pleasant, didn’t it?

Available to pre-order from the Nintendo eShop from December 7, Yooka-Laylee for Nintendo Switch features a shed-load of polish and updates, including single-JoyCon play across all eight multiplayer games, a custom Achievement system, plus the ability to take our collecting duo on the go without the need for extravagant extension leads!

The Playtonic team has spent many, many months optimising Yooka-Layleefor Nintendo Switch (with technical help and support from Nintendo and Unity themselves!) and we believe we’re delivering a version Nintendo fans can be proud of.

Players can expect a quality experience both on and away from the television and on top of that, Switch players will benefit from the huge list of updates we’ve added since launch such as a brand new camera mode, control improvements, menu options, music… and a lot more!

Click over to IGN to see Yooka-Laylee for Nintendo Switch in action.

Thanks again for your continued support and patience. We hope you agree Yooka-Laylee for Nintendo Switch is worth the wait!