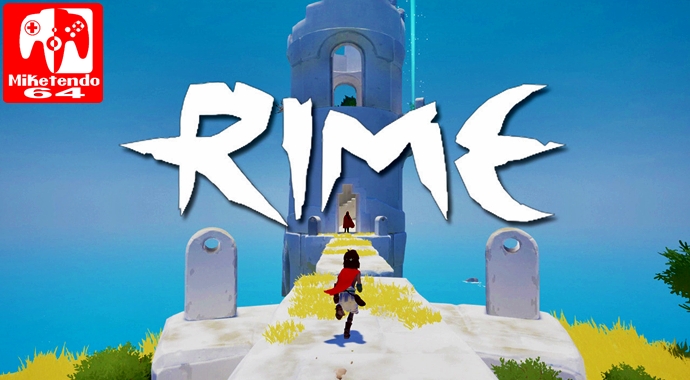 The troubled development of RiME is well documented. Initially set to be a Microsoft exclusive before ultimately being funded by Sony, the game was first shown at E3 2013 as a game similar to Breath of the Wild, about a boy struggling to survive on an open world island. Rumours began to swirl that the game was vaporware after it completely disappeared from any public showings for a few years, but in 2016 the IP was acquired from Sony by developer Tequila Works and the game was re-revealed with a much smaller scope, ditching the open world and survival elements for a more typical adventure game experience. With such a rocky history it’s a wonder that the game came out at all, but did it make it through the ordeal unscathed? The answer… is no.

RiME is essentially a game about a youngish lad, wandering around a mysterious island while solving puzzles. Calling them “puzzles” is a bit generous however, as they’re really more like busywork tasks. God of War and Zelda fans will surely rejoice at the sheer quantity of block pushing segments, and lovers of the climbing sequences in Uncharted and Assassin’s Creed will be overjoyed at how many times you’re required to leap from one ledge to another. Unlike those games, however, you never feel particularly clever or thrilled at the end of it. On the rare occasion that any given scenario isn’t braindead easy, it’s blatantly telegraphed to you through environmental “clues” like a giant brown square on the floor where you’re meant to push a block, or a scuff on a wall you’re meant to scurry across. The puzzles with the most potential are by far those that involve light, shadow, and perspective to activate switches and create illusory doorways, but they too are just as simple as the rest of the game.

And there you have it. No, I’m not kidding, that’s literally all there is to it. You wander around, solve an easy puzzle, climb a bit, maybe do a little swimming. Repeat for a few hours until completion. I hate to say it given the game’s stellar production values, but with the lack of any challenge, it all becomes kind of boring very quickly. All of this has been done before in better games like Ico and Papo & Yo, but those games still had unique hooks that set them apart from each other. RiME simply cobbles together aspects of other games and hopes that the story and visuals will be enough to keep you engaged. Alas, neither does the trick, at least for the Switch version.

RiME is one of those abstract artsy games that wants to tell a story without really telling a story and expects the player to read between the lines, which would be great if the narrative didn’t take ages to get anywhere. The point of the experience isn’t made obvious until the twist at the end, so up until then you’re basically just going through the motions hoping that there’s some cheese at the end of the maze. One such example is in the first level, where the proverbial carrot on the stick is a mysterious figure in a red hood who continually remains just out of reach. After numerous puzzles spanning multiple areas it seems like you’ve caught up to him… only for the game to suddenly throw you into a flashback that culminates in an entirely different level to explore, where your search for the hooded man is tossed out the window in favor of escaping from a giant bird who comes out of nowhere.

In addition, it must be said that the complaints regarding RiME‘s performance on Switch are no hyperbole. The framerate is pretty poor in general and never seems to hit 30 FPS unless you’re standing totally still, but when the game runs badly, it runs badly. This thing will turn into an Earth Defense Force-esque slideshow for no apparent reason while doing the most basic of tasks, which is a real shame since the graphics and audio are absolutely top-notch. What should be stunning and beautiful moments backed by the stirring orchestral soundtrack are repeatedly ruined by the constant stuttering and wheezing RiME engages in at the drop of a hat. It’s also worth noting that the Switch version costs $40 at retail compared to the $30 price on other platforms – while I understand the reasoning behind this “Switch tax” (cartridges do cost more to produce, and the inclusion of a free soundtrack download does lessen the blow a bit), to charge $10 extra for such a terrible port is just poor form. Those interested who lack any other console to play RiME on should simply give it a pass.

RiME is an average adventure game that relies heavily on its presentation to keep the player interested in the bog-standard puzzles and exploration. If you enjoy this type of game you’ll probably get more out of it than I did, but this particular port is so visually atrocious at times that I can’t possibly recommend it to any Switch owner.