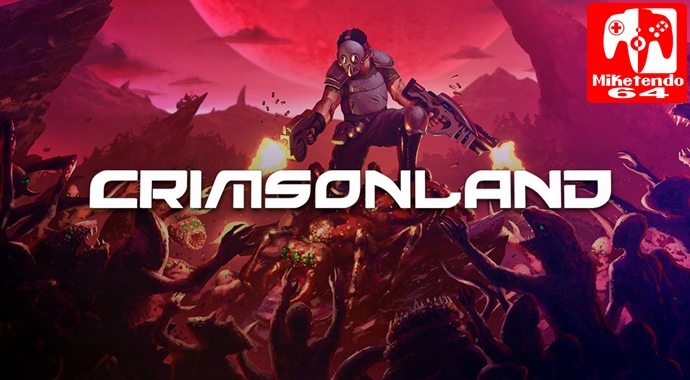 Crimsonland is a game that asks a very simple question: do you want to kill hordes of snakes, spiders, lizard-men, and zombies?  And of course, it already knows that the answer is yes, yes, a million times yes. It doesn’t waste any time with any frivolous backstory or setup beyond its appealing DOOM “inspired” key art, so in the spirit of 10ton’s top-down gorefest, let’s not bother with any unnecessary frivolities and get straight to the meat of this review.

Quest mode plops you down in an empty battlefield, hands you a gun with infinite ammo, and asks you (and up to three of your friends in co-op) to blow away all manner of ungodly creatures out for blood. The mechanics are simple – move with the left stick, aim with the right stick, pull ZR/ZL to fire, and R/L to reload – but the depth is found in the perk and weapon system. Though you almost always start with a basic pistol, upon killing your first enemy they’ll drop a random weapon for you to pick up. These range from flamethrowers to miniguns to rifles to shotguns, and while a few are duds the majority are fun to play around with. As you kill enemies, you also gain experience which can be used to pick between one of four perks when you level up. You may choose to get faster running speed, the ability to automatically melee enemies, or even fire explosive shots out of your body at set intervals. These only last for the current level, so you can tailor your choices to suit the situation. Lastly, there are the power-ups, which appear randomly throughout the battlefield and offer you bonuses like increased firepower for a limited time.

10tons have never had the prettiest looking games and Crimsonland is no exception, but this is arguably their worst looking game on the eShop yet. Normally this wouldn’t really be a problem for a game as straightforward and gameplay-focused as this, but the drab backgrounds combined with the low-quality enemy models and blood spatter lead to more than a few times where you’ll take damage simply because everything blends together into a red and brown mess (a problem made even worse when invisible enemies start showing up). The difficulty is also a bit inconsistent, as even on the easiest setting I would find myself suddenly coming up against a tough stage, only to breeze through the next level with little effort. The final level of Chapter 2, in particular, was much harder than anything seen in Chapter 3 by far, and seemed like a deliberate “git gud” moment by the developers. I won’t spoil it for those looking for a challenge, but let’s just say that arachnophobes need not apply.

There are 60 missions that unlock more perks and weapons, with two additional difficulties and a “no damage” completion bonus available in each level for the true completionists out there. There’s also Survival, an endless mode with 5 different variants available – I’ve never been one to enjoy this type of mode, but it’s there for score chasers out to make their mark, complete with online leaderboards. Unfortunately, even with all the variety on offer the action still manages to grow a bit samey after a while. Perhaps the game could have been improved with, say, varied objectives and missions, persistent progress, and AI that requires more than mere circle strafing… but wait! Didn’t 10tons just release Neon Chrome and JYDGE, two similar top-down shooters with all those improvements and more? Why does this game have less depth to it?

As it turns out, Crimsonland is actually a 2014 update of a 2003 PC game now being released in 2017 for Nintendo Switch. 10tons has taken the interesting strategy of throwing loads of their back catalog onto Switch in short order, and in this case, it perhaps does more harm than good. When Crimsonland’s improved spiritual successors are on the same platform, came out at around the same time, and cost roughly the same price, it’s hard to recommend it over its siblings. Still, this is a good game in its own right and should definitely be checked out by anyone looking for more top-down carnage.

It’s not as polished or deep as some of their previous eShop titles, but if you’ve already checked out 10tons’ other shooters and find yourself hungry for more, give Crimsonland a look.