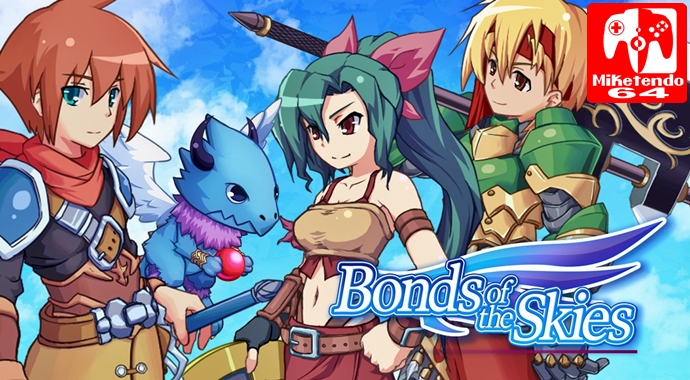 KEMCO and Hit-Point’s Bonds of the Skies is a decent little traditional RPG that started life as a phone game but has recently been ported over to the 3DS. It’s simple, bright and breezy stuff but it should scratch that JRPG itch.

Please note: My version of the game crashed and would not let me progress beyond “Story 22” – an issue that the developer is as confused about as I am, but they are currently investigating the issue. This review will take into account what I have played of the game up until now (around seven hours) and I have heard that the story becomes more interesting towards the end, so that will be taken into account also. Screenshots used have been provided by KEMCO and a number are from the store page as listed above.

Please also note: KEMCO have provided us all with an update for the game which does fix the game-breaking bug, so you can now happily complete the game. I haven’t updated the score because it does represent what I think about the game anyway.

Bonds of the Skies is a solid enough little RPG to download from the 3DS eShop, but it feels cheap in comparison to other 3DS RPGs (of which there are many). Aesthetically, you’ll immediately notice that it hearkens back to the golden era of the JRPG with sprite work, world design and music that wouldn’t look or sound out of place on the SNES. However, there is little character to the game’s design. It’s unique in as much as its setting, characters and plot, but there’s a permeating feeling throughout that you’ve played the game before – it’s all rather generic, familiar and unimpressive.

You follow the story of Eil, a mysterious orphan chosen by a God (Wind Grimoa, Nogard). During what’s essentially his Barmitzvah, Rednaught, the mighty fire Grimoa, attacks his village. You are tasked with traversing the world with Eil, looking for partners and further Grimoas in order to stop the dastardly Rednaught in his fiery tracks. Three members form your party, Eil, Iks and Avi and you will then start the meat of the quest. If all of this sounds familiar, that’s because it follows many of the tropes we know and love from traditional RPGs. The plot isn’t anything to write home about, as it is your run-of-the-mill JRPG stuff, but the writing is something to, err, write home about.

The dialogue isn’t the best. It reads like a fan-made RPG, perhaps thanks to a rushed translation job, but the language used in Bonds of the Skies is not what you’d expect to read for whatever reason. The dialogue from all involved feels cheap and poorly written – with constant discussion between the main cast speaking about how each of them speak (usually badly, as pointed out by everyone involved). Oddly enough, however, the shoddy writing allows the game a bit of charm outside of its generic graphics and plot. There are funny lines scattered throughout that might catch you off guard and the colourful characters are always a joy. It might look and sound generic, but Bonds of the Skies has something going for it.

You’ll find that the game employs a random encounter technique, while this is an instant buzzkill for some, I’ve always appreciated random encounters, they never fail to bring back fond memories of my childhood. It is in the turn-based battles where we find Bonds of the Skies strongest feature. Indeed, the game lets you change the formation of your three team-members whenever you need to during its plentiful fights. Let’s say Iks is on low health and directly facing an enemy with high health; if you move him over to the left of the screen (which doesn’t take up a turn), he will take less damage and deal less to that particular enemy. Learning how to use the changes can mean the difference between success and failure. It’s a simple system, but an effective one that sets it apart from other JRPGs. Be careful though, as enemies can also change their formation!

Enemies will deal a lot of elemental damage, too, and inflict your fighters with various ailments such as poison, stone (which stops you from attacking) and Pancho. Pancho turns your team members into odd little creatures that deal small amounts of damage unless you use the skill specifically for that particular curse, which is overly powerful. Thankfully, items to deal with these afflictions are in plentiful supply and rarely will you come across enemies that truly hurt you. Even if two of your three dies, they will simply miss out on experience points and return on one HP, ready to fight again. From what I played of the game, it rarely made me sweat, and if it did, you level up in no time thanks to plentiful encounters that award you with more than enough experience points.

Bonds of the Skies is a fast-playing RPG, which is nice in a world overstuffed with open-world monstrosities. Here’s an RPG you can actually finish in decent time without neglecting your real-world duties (as long as your version doesn’t stop you from progressing as mine did). Despite the speedy gameplay and quality battles there are issues with the gameplay. You will have to backtrack, you’ll scream at your 3DS as you struggle to get off your boat onto the sparse landing zones and you will get let down by the rinse-and-repeat structure of the game. It’s a simple, no thrills game that sees you go to a new town, speak to the mayor, get access to the dungeon, fight your way through it and eventually fight the boss. It’s not amazingly smart, but at least the quick nature of the gameplay allows you to breeze through it all.

There are plenty of JRPGs on the 3DS and, unfortunately, Bonds of the Skies is not one of the better ones. It’s a generic game filled with all the dullest tropes of the genre and some dodgy writing. The repetitive music coupled with the rinse-and-repeat nature of the game makes for a disappointing experience. Thankfully, the battles are surprisingly smart and rather enjoyable. Some of the creases are ironed out by the game’s quick gameplay, but it is all too easy. If you’re desperate for a new classic JRPG to play, you could do worse, especially at $9.99.