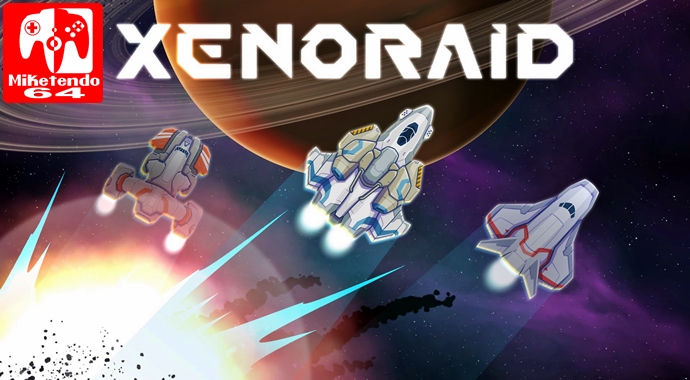 Once upon a time back in June 1978, an awesome little game called Space Invaders came onto the scene and now in November 2017, the most modern spiritual successor  has arrived.

Granted Taito, developers of Space Invaders have nothing whatsoever to do with Xenoraid, as Xenoraid is all the work of big Switch supporters 10tons, but Xenoraid is such a natural and modern evolution of Space Invaders that it is really hard to deny the similarity between the two. Sure the original Space Invaders was a two-dimensional fixed shooter game, where the player could only move left and right and needed to take out the attacking alien ships that come in waves and move from the top of the screen downwards, whereas Xenoraid is a “vertically scrolling shoot’ em up” that can double as a bullet hell experience when things get too hard, but it comes across as being more of an evolution, as opposed to something completely different.

Only, since Xenoraid is no arcade-like game to the extent that Space Invaders is, as Xenoraid does have the look and feel of a decent home console indie made video game, there is more to it than just alien ships to explode. For starters, Xenoraid is a Space Invaders game you can play with up to 3 of your friends, as 4 player co-op isn’t just supported, but actually makes Xenoraid more fun than just playing on your own, but there’s also a whole upgrade system at play.

Ships of different natures, with different arsenal set-up can be brought, sold and upgraded. There is a Tech Lab in the main campaign that, if you have the required amount of credits, or just enough to spend in a given moment, is the place to go if you’re looking to make improve the armour for all 4 of your fighters, or just make a big bang when one of your ships blows up, to take some of the enemy out with your kamikaze pilots. Now, Tech Lab is not just limited to the main campaign as it does exist in Survival mode, which just like the main game can be played as a solo experience, or with friends with three playable locations, such as Earth, but in survival, you only have a limited number of Credits that can only be used up once before you try your hand at seeing how long you can survive.

Unlike the endless Survival mode though, the main campaign does have a story and while it isn’t anything to write home about, it does at least give you a valid enough reason to go to war against the alien menace in the first place and defend your home planet, but if you need a little more than that, here it is: The events of Xenoraid cover The First Space War that begins in the year 2031 (yes, we have just 16 years to get ready for a galactic battle and 4 years from now is when the alien fleet headed towards Earth will be detected, with our efforts to communicate with it failing in 2023.) Only despite having all this time to prepare for the war, even though our ships have been improved and modified as best as they possibly could by our own technological advances, let’s just say that the alien menace is superior in almost every way, so when you can upgrade, you need too!

While the fighters you use can be promoted, warranting better results when facing humanity’s greatest threat yet, and only controlled one at a time, but can be swapped out at time in battle via the press of the button, which is a great way of dodging, or a smart move when your weapons have overheated, and swapping can arm you with a fighter good to go, but if they die, they’re not coming back. Yes, you can buy a new fighter and spend the credits you get from completing missions and picking up small change that can randomly appear from a ship you just destroyed, but that’s not the point. While you can get a new fighter, they won’t be as good as the one you have lost, or effective, which might not be important when on the earlier easier missions, but on the harder and later missions, only the best of the best will do and the best, are the ships you’ve been able to keep alive, via swapping them out in time before they can be destroyed and repairing them between missions, of which there are more than 40!

Furthmore, among those 40+ missions that are broken up by 5 Battle segments, there are 4 Boss Battles that can either be made easier or harder, just by enabling finger tilting and just in case you’re wondering, while the missions themselves do have set parameters at play, missions are “driven procedurally,” so if you were hoping to memorise which enemies come out from where and how many at each time, you can’t as the action is kept fresh and dynamic at all time and no, the typical spray and pray type of shooting is not going to save you, but it is all part of the charm that Xenoraid has to offer.

I was never really any good at Space Invaders as I never really cared to put that much time into it and I’m not even that good at twin-stick shooters and shooting games in general, as I’m even mediocre at Xenoraid, but I still absolutely enjoyed and I think that’s the thing we should focus on. The music and graphics are more than decent, the action may not be as dramatic as it could have been as Xenoraid can be described as being tamer compared to 10tons’ other Switch offerings, but it comes across as being more fun, more welcoming to players who aren’t great at shooters and is definitely a 10tons game that is worth checking out, if you don’t like the look of their other games.