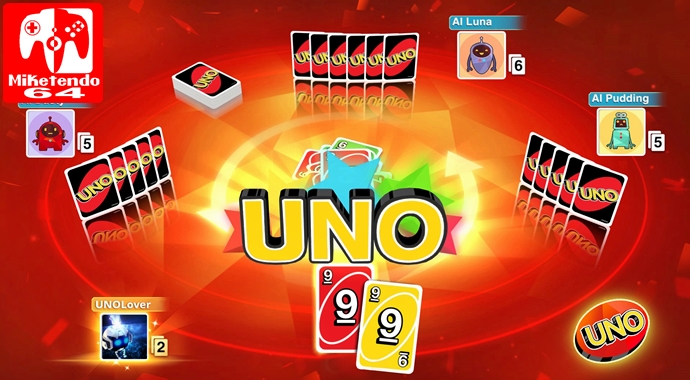 In what appears to be a trend of adapting tabletop games to the Nintendo Switch, Ubisoft has brought the well-known Uno to the platform. As a card game, it synergizes well with the Switch’s portable capabilities, but limited outlets for multiplayer and social interaction hold it back.

The tabletop game’s simple rules are faithfully adapted here: whittle your hand of cards down to nothing. Achieve this by playing cards that match the color or number of the one in the middle. For example, if a red “0” card is in the middle, you could play another red card or a “0” of any color. Additionally, you can throw your opponents off by activating cards with special abilities, such as reversing the turn order, increasing their hand size, or downright skipping their turn. And when you’re down to your last card, you had better shout “UNO,” represented here by pressing a button, or other players may call you out. It’s the core game to a tee, but the experience admittedly gets boring after a while.

Thankfully, Ubisoft also included three themed decks based on its in-house franchises such as Rayman, Just Dance, and, you guessed it, the Rabbids. The theming is not just for show either. Each deck comes with four exclusive cards that dynamically change the game. For example, one card summons dancers who prevent non-numerical cards from being played. Or a Rabbid may pop up to annoyingly enforce a hard three-second turn limit, raising the tension and potentially causing misplays. The exclusive events are genuinely entertaining additions, though more themed decks and the ability to mix and match special cards could have increased replay value. Who wouldn’t want to play Uno with an Assassin’s Creed flavor? Otherwise, extra house rules can also spice up the game, with the ability to play matching cards out of turn and swapping hands with other players being easy favorites.

However, even that can get old, especially if you’re primarily playing with the A.I. Uno at its heart is a social game, meant to be played by friends gathered around the cards. That feeling is nearly nonexistent in this digital version. With just one copy of the game, you can only play single-player against the computer, a team match with one partner, or online. It’s the unfortunate consequence of adapting a game in which players aren’t supposed to see their opponents’ hands. At least the A.I. plays well, but engaging with silent robots can only take you so far. And although you can team up with a local partner for 2v2, you’re still bound to dull computer opponents.

What is meant to be the saving grace, online Uno, is not implemented well on the Switch. For one, there is no chat or messaging system whatsoever aside from emotes. So again, that social element is lost even when playing with real people. Without a way to convey human personality, online matches are nearly indistinguishable from games against the A.I. The only difference is that online has more lag and the chance to disconnect randomly, which happened to me at least once. Also, matchmaking was slow due to the limited player base, and I could barely get a match going. This isn’t the game’s fault, but the complete lack of ability to set up private online games with friends is a major omission.

There is one way to replicate the tabletop experience, but it requires each player to own both a copy of this game and a Nintendo Switch – just a bit more costly than simply sharing a physical deck of cards. If your friends just so happen to have the game and system, then sure, this isn’t a bad way to experience Uno, considering you don’t have to set up or clean up. Plus, you can still play anywhere thanks to the Switch’s portability, an advantage over other console versions. It’s a shame Ubisoft didn’t implement download play, though.

The iconic color-coded Uno visuals are clean and convey gameplay well, like highlighting the current player and having a consistent indication of turn order. A great accessible feature is the color-blind option, which adds shapes to its cards. The parlor music is relaxing, though it gets repetitive after a few loops. By far, the themed decks were the most appealing to the senses, thanks to the added effort of extensive backgrounds, animated characters, and tunes hailing from the respective games.

If you’re looking specifically for the base game of Uno and don’t mind playing against computer opponents, then this is a decent version – perhaps even more so than on the other consoles because of the Switch’s built-in portability, not to mention the handy touch-screen support. The game is cheap, but it likely won’t last you long with its limited local and online multiplayer options. Even online leaderboards and achievements don’t do much to enhance replay value. Without the key element of social interaction, this digital version is nothing more than an empty shell of the physical card game.

Thank you for reading! You can check out more of Mr. Panda’s articles at Mr. Panda’s Reviews and Nintendo reviews and videos on his YouTube Channel, Pandas at Play.