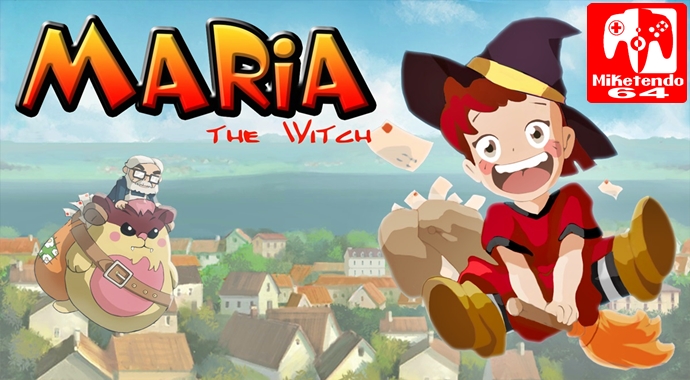 With many eShop titles looking to cast their spell on players, one of the more recent releases is now looking to do the same, only this time around, the game’s protagonist is a Witch, so while she should be an expert at casting spells, the Witch clearly needs to go back to school.

Maria the Witch has been making the rounds since it originally launched last year, only just because it is a game that is available on Steam, mobile devices, Xbox One and now Nintendo Switch, it doesn’t mean it is a warmly received. In fact this Flappy Bird clone by Naps Team has been met with so much criticism that while Maria the Witch is not a flop, it is however at best, average. Only while average can be tolerable as and even surprising, but as far as Switch is concerned, I actually see Maria the Witch being worse than average.

In terms of premise, Maria the Witch is about a Witch named Maria, who works for the Post Service, tasked with a challenging job, to deliver the post. Why is this challenging? Well, the villainous duo Zaki and Mia have stolen all the mail in all the land and it is down to Maria to get it back and see it delivered. Only Maria is by no means a professional. In fact she is just an amateur who can barely ride her broom and needs a lot of practise, which you can guarantee she will get as Maria handles terribly and players will die so many times on a single level that for the most part, the only thing you will become a Master in, is in the many ways to die as Maria only needs to touch a cloud, a wall, an enemy or a moving structure just to die and that’s not all. Lava can kill her, she can drown when flying through water, which also slows Maria down, but even landing anywhere that isn’t a checkpoint or the end zone.

Now I wouldn’t mind how susceptible to death she is, if there were some decent controls at play, but there aren’t. Pressing Y or A will propel Maria forwards in the direction she’s facing, (A for right, and Y for left,) only slightly holding the button down will cause Maria to rotate in a complete 360°c circle, whereas holding it down will make Maria to do a sharper rotation, only watch where you do such a manoeuvre because crashing into a cloud and even just brushing up against it, will kill you and see you having to take on the level once again, from the last checkpoint you activated.

Yes, thankfully in this game where death lurks around every corner, there are checkpoints available, only in order to use them, you will actually need to purchase them, via the coins you can collect when flying around, only while you can’t spend them all at once at a single level, you will want to be a bit selective as to when you use them, because unless you can find and locate every coin on any given level, it pays to make sure you always have a coin or two on you to buy a checkpoint when you really need it. For instance, if there is a really difficult letter to collect, then it is in your best interest to safeguard the closest checkpoint, to save you having to fly across the level and get it and hope you stay alive long enough to stick it into a post-box, because if you fail, you will have to collect it once again and try and again until you succeed.  There are also portals to secret locations where coins can also be discovered, only they can be a total nightmare to navigate if you have yet to properly master the game’s poor controls.

To make things harder though, as well as you being required to collect coins and letters on each and every level in every world (of which there are 4 plus a World made up of 8 Tutorial levels,) there are also Stars that play a role. You see as a game that was once a mobile title, each level has a number of goals to accomplish and if you do them all like collecting & delivering every letter, then you will earn a Star and the more Stars you have, the more you can do. For starters, you can access other worlds and other areas on individual levels that were previously unreachable, so it’s either shape up and get the Stars, or come to terms with the fact that you will not be completing Maria the Witch anytime soon.

There is some good news though. Once you have completed enough of the earlier levels, Maria the Witch does have a slot machine system at play, in which three possible power-ups are presented at the beginning of a level and you are allowed to pick the one that you want and even if you die, the power-up will remain so as long as you are on that particular level you got it. So if you want a power-up that lets you keep the items you collect, there is something for that. If you want a power-up that will let you breathe underwater longer, there’s something for that too. There is even something called a “Compass” that helps you find the items on each level and a Chest that actually allows you to keep whatever you collect, even if you die.

Still, even if you can look past all that, there is something that demonstrates just how poor a port Maria the Witch is and that is its menu screen. You see, while it is set-up in such a way that it actually looks like you can touch certain things to interact with the buttons and letters and the like, you can’t. Maria the Witch features no touch-screen controls whatsoever and when on the menu, actually requires you using the Right analog stick, just to move over to wherever you need it, before pressing B to interact and I don’t know about you, but for a game that was once a mobile title on a platform that does support touch-screen controls, for me the simple lack of it, really is a case of the straw that the break the camel’s back.

For a game that has cutesy graphics that would see you deceived into thinking Maria the Witch is a kid’s game, it absolutely is not. It will test you, it will infuriate you and if you’re prone to rage-quitting, then quit you will. But if Flappy Bird and Flappy Bird clones are something that appeals to you, and the challenges that come with them, then great, but if they don’t, Maria the Witch is a sub-par game that you can, of course pass on, as once again a flying related game on Switch (vroom in the night sky and Sky Ride,) has failed to impress.