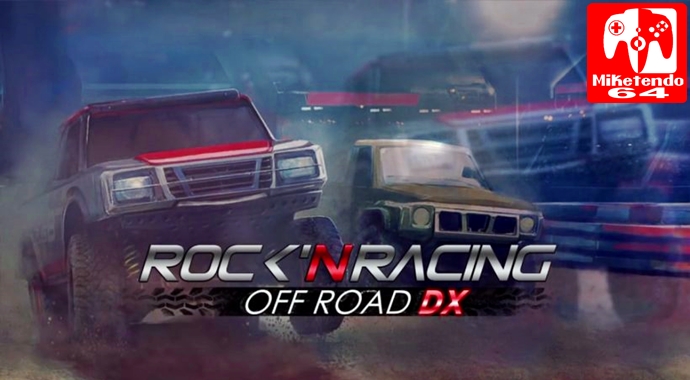 Have you ever heard the expression “never judge a book by its cover?” Well, this review is a classroom, then today’s lesson is “Never judge a video game based on its description and cool banner image that’s displayed in the Switch eShop.”

I went into Rock ‘N Racing Off Road DX wanting to like it. Wanting to be able to play it and then sit down at my desk and type up a review about how the Nintendo Switch actually has another decent racing game on Switch other than Beach Buggy Racing and Mario Kart 8 Deluxe, which yeah is the finest looking Mario Kart game to date, but it’s just a slightly enhanced port of what was already a great game on the Wii U. But yes, I wanted to like Rock ‘N Racing Off Road DX and I wanted to be positive about it, but the fact of the matter is, it is a terrible game. Some might go even further than that and say it is abysmal, and possibly be right to do so, but me, I’m just saying it is bad and very much so at that.

The game boasts “Realistic physics for driving, jumps and crashes,” only there was no realistic physics when I was playing and the crashes, although they may have been a touch more life-like than seen in some video games, it doesn’t make them the best we’ve seen, unless their intention is to have you wipe-out. To purposefully ensure that once you have indeed crashed that at least half your competitors will overtake while you’re trying to recover, before you then need to drive like a bat out of hell to reclaim first place, only to fail to do so as almost all available race tracks seem to be designed in such a way that you’re never actually allowed to drive at your full speed for more than a few seconds and Spoiler Alert, your top speed isn’t all that. Not that you’ll ever actually know what it is as there is of way of knowing as they game doesn’t tell you in any way, but picture yourself playing a Mario Kart game on 50cc and now picture yourself going much slower and that gameplay is top-down experience, which hinders as much as it helps.

The worst thing about the gameplay though, is that there is no Options Menu, there’s no explanation as to what the controls are, as you’re to finger those out for yourself, but again with the Spoiler Alert, it is A for Accelerate, B for Reverse and the likes of the Left analog stick to steer, but the handling is just ghastly and no I don’t mean the cool Ghost-type Pokémon that evolves into Haunter, Gastly, but ghastly as in distressing, grisly and even shocking, but because I am not a total jerk, the game does have some high points for me to focus on.

Although there is more than just the one vehicle you start off with, as another 4 can be unlocked, as you advance through the 5 Cups (North America, Europe, Asia, Africa and South America,) one of the vehicles is the Highlander (unlocked by beating the North America Cup by coming in 1st) and the Highlander is hands-down the best vehicle in the game. It seems to have the best handling and performance, which is saying something since all the rest of the vehicles feel absolutely terrible, but the Highlander is the vehicle to drive, especially against friends.

On the subject of friends, of the three available game modes Rock ‘N Racing Off Road DX possess, there is a Multiplayer mode, only it’s just local and not online, so while you can’t go head to head against players across the globe, you can play against 3 of your friends if you’re willing, on any of the game’s 24 available race-tracks and even if you haven’t beaten your first cup, there are 7 of them available, with the rest becoming available just as soon as you unlock them, via advancing through the Championship mode, aka Rock ‘N Racing Off Road DX’s bread and butter.

As for its other mode, it is of course Time Trials, which solely requires you to complete each race-track in as fast a time as you can possibly muster and have it uploaded to the game’s online leaderboards and inspire you to be the fastest and set more records, or just do it as you please, but unless you do play Championship mode, you will be limited with just how many tracks you can set your fastest times on. So in short, if you want more, you’re going to have to go out and get it for yourself and win those Cups only while the AI can be laughable and pose no threat at all as they would rather drive all over the place and crash into everything, other times they can be a real problem and stop you from finishing in overall first. Should they succeed in doing that, you will then need to redo the entire cup, until you do eventually win, as winning is the only way to advance and unlock more content and while you’re trying to do that, music that is supposed to be rock, but feels more like rock muzak insists on being one of the two things you can hear instead of the sound of your engine, because in addition to the rock muzak, there’s an annoying commentator who loves to patronise you when you mess up! (Oh goody!)

If there was ever a game I could just never bring myself to recommend, I hate to say it, but Rock ‘N Racing Off Road DX is such a game. While it is indeed bad, but for a few dollars more, you can buy Beach Buggy Racing, (priced at $9.99), which is a “Mario Kart” rip-off that offers a whole lot more content, vehicles, power-ups and even other characters to race as. So unless you absolutely despise Mario Kart 8 Deluxe and Beach Buggy Racing and are desperate for a racing game on your Switch, the only time you would ever want to buy Rock ‘N Racing Off Road DX, is if you are already fully aware of what it is, what it offers and are okay with that and if you are such a person who is willing to give it a go, then I salute you, because Rock ‘N Racing Off Road DX is not for everyone and it certainly isn’t for me!