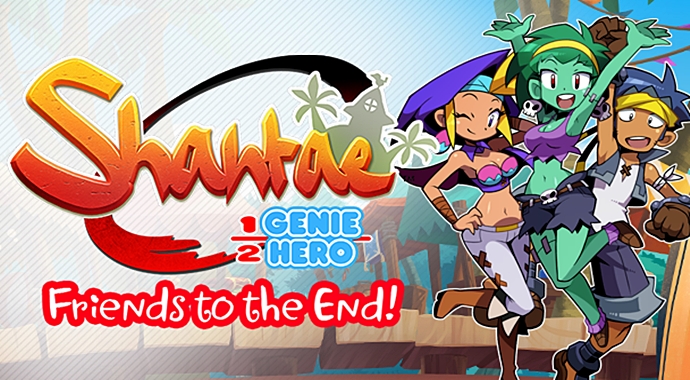 Friends to the End! Yet Another Piece to the Shantae: Half-Genie Hero Puzzle!

For anyone who’s been following WayForward’s Shantae: Half-Genie Hero since it first appeared on Kickstarter, you’ll be fully aware of the fact that there is more to the game than what we received as more content is on the way and now thanks to a new update, WayForward are about ready to reveal almost every details about the Friends to the End DLC and here it all is:

The Missing Piece of the Story!:

Friends to the End takes place chronologically in the middle of Shantae’s storyline. Unlike the (possibly embellished) tale of Pirate Queen’s Quest, this new mode would be considered “official cannon”, and fills in a part of the narrative that we, as the audience, were previously not witness to.

Shantae has been turned to evil by the foul Risky Boots by way of a polarity-swapping machine, and is reborn as Nega-Shantae! Sky, Bolo, and Rottytops must enter Shantae’s mind in order to rescue her consciousness from the “Nightmare Realm”; a series of twisted memories designed to swallow Shantae whole.

This will not be an easy task for the three adventurers, who lack both genie magic, and the ability to get along.

This translates into a brand new mode with three new heroes, a whole new story, and altered memories (revamped versions of existing levels) to explore and conquer. The icing on the cake is a new final level, and a showdown against Nega-Shantae.

For Friends to the End, you’ll be controlling Sky, Bolo, and Rotty all at the same time, swapping freely between heroes. Each hero has a special ability that is useful for overcoming certain obstacles, but players are given a wide berth as to which character they want to use for the most part. Let’s take a look at each character!

Sky is quick and agile, and can make long jumps by using her bird Wrench as a glider. Sky attacks by throwing seagulls, which are somewhat weak, but can hit at long range. Her special ability is to toss eggs, which explode into instant platforms! Finally, she can spend Dream Magic to summon an orbiting flock of birds for extra defense! Sky is definitely the best character!

Bolo deals heavy damage with his spiked Bolo Chain, which offers medium range and decent speed. He can also fire a Spring Claw at odd angles to knock away annoying airborne enemies. His special ability is to latch onto certain objects with his Spring Claw, which lets him to swing around freely like some sort of bionic ninja! To hit distant enemies, Bolo spends Dream Magic to toss a pong-style Spike Ball, which bounces diagonally at high speed. Bolo is definitely the best character!

Rotty attacks by removing her zombie leg and using it as a club, dealing massive damage at short range. Her special move is the Head Toss. Rotty can aim her head freely in any direction, and toss it through certain barriers and over or under obstacles. Anywhere her head safely lands, she can reform. By spending Dream Magic, Rottytops can eat a brain to replenish her Hearts! Rottytops is definitely the best character!

From a design perspective, Friends to the End differs from Shantae and Risky’s modes in that the power up system exists “in the field”. There are no menus or inventory to manage. Collecting Gems will cause a hero to LEVEL UP, increasing their attack speed and damage dealt. Getting hit by enemies incurs a penalty, dropping the power level. Enemies and Bosses have been tailored around these new concepts, dropping health and Gems to feed the player’s needs. You could say that “Friends to the End” is part puzzle game, part action game, and part player management.

We’ve saved the best for last! The time has come to reveal the incredible talent who will be voicing Sky, Bolo, and Rottytops!

Karen is an Actress, VO Artist, VO Director and Dialect Coach. She has created over a thousand voice-over characters of all shapes, sizes, genders, ages, and species, from classic Disney princesses, to iconic villainesses, to talking jellyfish and shy tadpoles.

Nathan Sharp is an Asian-American voice actor, musician and songwriter best known for his music-oriented channel, NateWantsToBattle. Covering a wide array of songs, his music portfolio totals up to over 200 compositions and renditions that range from parodies of popular hits to English renditions of anime openings to music about video games and anime to his original album “Sandcastle Kingdoms” released in March 2017 that charted on iTunes #1 Alternative Albums and Billboard’s Heatseekers Chart.

Cherami Leigh has been in the industry for 20 years. She has been in over 75 commercials, and has worked on over 100 anime projects including “Lucy” in Fairy Tail, “Asuna” in Sword Art Online, “Road” in D. Grayman, “Lizzie” in Black Butler, “Mai” in Ghost Hunt, and “Patty” in Soul Eater and has worked on over 20 video games- including Borderlands 2- in which she plays the popular DLC- Gaige.

She voices “Sailor Venus” in Sailor Moon, “Tome” in Mob Psycho 100, “Kudelia” in Gundam: Iron Blooded Orphans, “Claudia Peer” in Gundam: Thunderbolt, “Ilia” in RWBY, “A2” in Nier Automata and “Makoto” in the Persona 5. And was recently announced to be playing “Sarada” in Boruto: Naruto The Movie and multiple characters in Fire Emblem: Heroes. She has a lead role in the animated feature “Ribbit,” has guest starred on “Doc McStuffins” and plays “Peanut Big Top” in the La La Loopsy Girls.

We’re thrilled to have these three incredibly talented performers playing alongside Cristina Vee (voice of Shantae and Risky Boots) in Friends to the End. Please hit them up on social media, show your appreciation, and welcome them to the project! As far as when you can hear them in action…

Ok, one more bit of good news before we sign off… Development of Friends to the End is FINISHED!

The game is being prepped for submission to Sony, Microsoft, Nintendo, and Valve right now! This new DLC will be FREE to Backers, and paid content for the public. As usual, it takes several weeks to pass submissions and get download codes. We expect this content to arrive in time for the holidays, so we hope you’ll finish Mario, and clear your calendars!

Now, whilst a price as to how much this new experience will cost non-backers may not have been revealed, at least we do know it is available as an extra purchase for those who do need this new content in their life badly and that more news is on the way, so let’s be patient. Let’s give WayForward a bit of breathing space and take them up on their advice of clearing Mario first and if you have already, DOOM, Skyrim and Sonic Forces are on their way to Switch this month, so it’s not like we will be bored in the mean time!