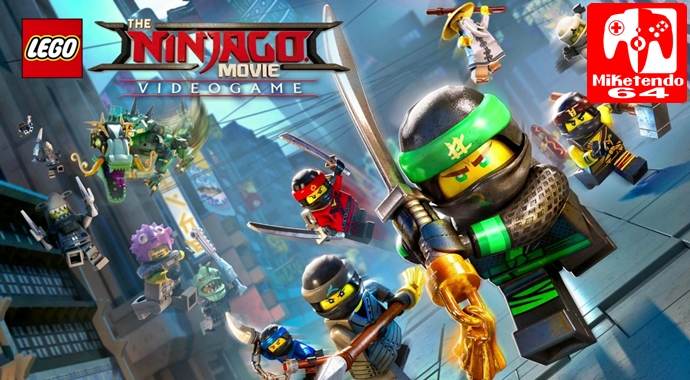 Over the years, there have been many a great LEGO game and one of the best, if not the best is LEGO City Undercover, and after having gone unchallenged long enough, it now has a contender!

In case it was not obvious by its name, The LEGO Ninjago Movie Video Game is a video game alternative to the recently released The LEGO Ninjago Movie, which means it is both based on the Ninjago series and a carbon-story-copy of the film. Still just because it is the film reincarnated as a video game, it’s surprisingly not that bad.  On the surface it is the Ninjago movie, but at is core, it is pure LEGO City reborn that could even be considered as two games, or at least a game with two faces.

On the front it is a game that closely follows the events of the film, as it throws Nya, Zane, Jay, Cole and Kai into the spotlight as the resident Ninja heroes of Ninjago, who are all lead by Lloyd the Green Ninga and the man who taught them everything they know, Master Wu. Now because they are heroes, it does of course mean there are villains in which they do battle against and the biggest and baddest of them all is Lord Garmadon, a four armed power mad master of martial arts. Although he’s a bit more than that as he is none other than Master Wu’s older brother, who back when he was a child, was bitten by an 0dd-looking green snake that was none other than The Great Devourer.

For many years Garmadon fought the evil and corruption twisting and turning inside of him, but in the end it would prove too much and his time as a hero and an ally fighting alongside his brother became no more, but in one of his last acts of goodness, he birthed a son and while he may have fallen to the Dark Side like Anakin Skywalker did in Star Wars, Lord Garmadon has a Luke Skywalker of his own and that Luke is named Lloyd, which is pronounced as La-loyd if you’re Lord Garmadon. (In both the film and the game, Garmadon states La-loyd is the correct way of saying Lloyd’s name and it is why it has the two “L’s.”)

Being the son of Lord Garmadon has never done Lloyd any favours as he is pretty much the most hated “normal” person in all of Ninjago, as everyone except Garmadon seems to know who La-loyd’s dad is and yet as a Master Builder and the Green Ninja, he is hailed as a Hero, but there is no time for him to fret on all that as during the earlier events of the film/game’s story, Ninjago falls under attack by Garmadon once again and although the team of Ninjas win thanks to their high-powered mechs, it’s too long before Garmadon attacks once again and upon the point of total victory, forces La-loyd to reveal himself as Garmadon’s son and uses the Ultimate Weapon against him. Fortunately for Garmadon though, the weapon works in a way La-loyd wasn’t expecting and chaos ensues when real-life cat Meowthra comes onto the scene as the Ultimate Weapon was nothing more than a laser pointer. From that point on, things go from bad to worse and players of the game must spend the rest of the game trying to stop this chaos, by conquering the game’s 8 main locations.

Story and plot-wise, it all goes as you would expect, but with the Ninjago game, you don’t really mind that fact so much as half of the game’s cut-scenes are those from the actual film where Lloyd comes across as being the only character you really need to care about, whereas the other half of the cut-scenes are those made for the game and actually give the other ninjas their chance to shine, only if you’re expecting the same voice actors being behind both, you’re wrong as the film cast is replaced by another cast who instead of attempting to impersonate the film cast’s take on the ninjas, they did their own interpretations and it worked.

Now as a video game of two minds and being a LEGO one at that, there is of course lots to see, do, destroy and collect as there are other 100 available Ninjago related characters, 220 Gold Bricks and Ninjanuity Tokens to be collected, with the latter being available to be acquired via progressing through the game’s main story.  Now since The LEGO Ninjago Movie Video Game does come with this particular content and 8 different locations and story chapters to explore and playthrough, which can be done alone or with a friend, it of course means it is a game that can be played one of two ways. You can either progress to a certain point and return to earlier locations and puzzles to complete quests, challenge dojos, which are a great way of getting new costumes if you can best the high score, and bust open Gold Brick doors to access secret spots and hideaways, or there’s the other way.

Option 2 is you just stick with the main story, ignoring everything you think you can do now that you have acquired the power-ups and Spinjitzu powers you think you need, and finish the main campaign as quick as you can. Doing so will allow you to collect every Ninjanuity Token and unlock every ability going to become a true Master of the Spinjitzu arts, which means by sticking to your guns, you can now do your second playthrough of the game and whereas before you would rush your way through the levels to finish them as quickly as possible, you can take your time to take in the surroundings, fail in your efforts to beat up a world of LEGO that is more for show than anything else and complete one area at a time with thanks to Free Play Mode.

It goes without saying Option 2 is the quickest way to play as it will help you and whoever you have playing with you at the time, speed things up, but I didn’t go for that approach. I went with the first option and kept coming back to things as and when I wanted to, purely because sometimes a game is meant to be enjoyed, pioneered and experienced in the moment, and I’ve got to say, I think I made the right choice. Yes the more you play it the more abundant it becomes that The LEGO Ninjago Movie Video Game is not and will never be as good as LEGO City Undercover as it does often feel that the game is more for fans of Ninjago as opposed to LEGO fans in general, but it’s beautiful, it’s full on and there’s even a mode that allows you to play with up to 3 friends in some high octane 4 player combat action due to Battle Maps and yes the LEGO Ninjas, do live up to their ninja name and are capable of some very fancy fighting. It can get repetitive at times, but when it’s not, it can be oh so good and even better when timed just right as there is nothing quick like a synchronised take-down that is effect even against the bosses! And the weapons and fighting is not just limited to the ninjas themselves as players can customise and create their own character that can be shared with others and have them wield any weapon of their own desire as long as you actually have the weapon in your possession.

However, while the game does boast plenty of positives, it also has its fair share of negatives. For starters there is one cut-scene where audio and footage seem to have a falling out as things are happening, lips are moving and no sounds are heard and this happens right near the end by the way, but there’s glitches as well. The sky will act as if lightning was occurring and yet it’s not, because the flashing is a glitch and one minute you could be capable of changing your character whenever you desire to do so and then the next second you can’t change at all, until you do a mission or a Challenge Dojo and things seem to sort themselves out until it happens again and again and then the game crashes. (This has happened to me three times.) But while it does suck that these things do happen, they are nothing a patch can’t fix and they’re not all that game-breaking anyway, so although there are faults present and the game is a movie companion piece, The LEGO Ninjago Movie Video Game is a lot better than what I was expected and easily had me playing for more hours than I am willing to admit!