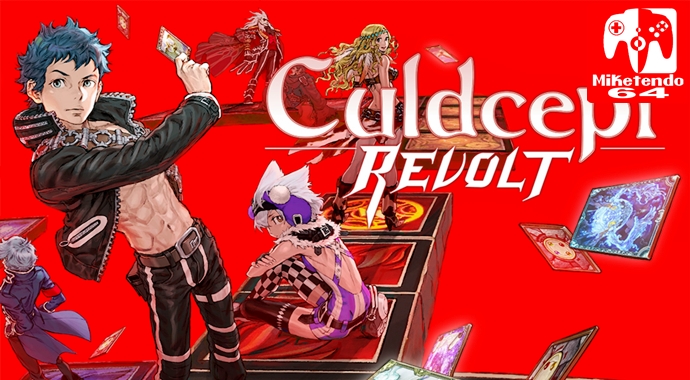 October 5, 2017 8:18 am Published by themancalledscott Leave your thoughts

It isn’t all too often that you get to play a game that feels distinctly different, but that’s pretty much the case with Culdcept Revolt, which plays like a combination between a board game and a card game, with some light RPG elements thrown in for good measure. Although it boasts a somewhat tedious nature that will turn away some players, those who will fall in its niche will likely be hooked.

Truth be told, this isn’t the first Culdcept game, as the series saw some releases on the PS2 and Xbox 360 back in the day. But Revolt is the first entry in the series to make its way outside of Japan for nearly a decade, so even those who did manage to play the series during its “test run” era in the western world will likely feel a sense of newness when stepping into Culdcept Revolt’s unique setup.

The goal of Culdcept Revolt is to acquire a certain amount of magic (which varies depending on the board) and then make a lap around the game board while still holding on to the required amount of magic. As you may have guessed, you try to either prevent your opponent from gaining enough magic to win, or steal it from them when and if possible.

It works something like this: the game boards are comprised of five different types of spaces; fire (red), water (blue), wind (green) and earth (yellow) make up the majority of the boards, with the “gate” spaces being required to pass by in order to complete the aforementioned laps around the board.

At the start of each turn, the players are given a card; either monster, item or spell. The monsters are possibly the most important, and are placed on spaces to steal magic from the opposing players who happen to land on that same space. Either the enemy player pays the toll, or they attempt to battle the monster with one of their own. Should the defending player win the battle, the passerby must still pay the toll. But if the offender wins, they get to keep their magic.

Most monsters come in one of four types, corresponding with the elements of the board spaces, and receive bonuses if they’re placed on a space that shares their element; but there are also monsters that don’t have types, and are best used when you’re not in a position to gain the bonuses.

Should you enter a battle with a monster, both parties have the ability to equip their monster with an an item card (when applicable), which may increase their hit points or strength, or provide a different bonus, like a guaranteed first strike.

Finally, the spell cards are used outside of battle, and can be used to get a head start in a fight by damaging a monster, or provide you with extra magic, or even limit the number a player’s dice will land on in the next turn (which can potentially be used to help yourself or hinder an enemy).

Players gain additional magic every time they pass a gate space during a lap, and once they finish a lap, the monsters they placed on the board lose their “fatigue,” which essentially means you can then provide them with additional bonuses.

These bonuses mainly revolve around altering your conquered terrain. You can change the color of a space, swap the positions of monsters, and even increase the value of a space, thus increasing the toll enemy players need to pay.

The catch with all this is that playing most of your cards, and performing these territory actions, cost you some magic. So you can’t simply upgrade your territory and deploy monsters all willy nilly. There’s a sense of strategy to be had.

In terms of the core concepts, Culdcept Revolt has a lot of originality going for it. It feels like something like a crossover between Monopoly and the “Duel Mode” of Mario Party 3, but with fantasy monsters and anime characters.

Despite the freshness and charm, however, I’m afraid that Culdcept Revolt won’t be a game for everyone. Many of its matches will feel like they drag on and on. This is doubly true in the single player campaign, in which the enemy AI seems to take its sweet time in making decisions, and the characters often feel the need to bombard the player with dialogue at the start of their every turn. And frankly, the things the characters have to say aren’t particularly interesting, with a storyline that’s riddled in cliches, right down to the whole “main character with amnesia” trope that seems to follow anime-styled games like cuteness on a puppy.

Another downside comes in the form of the random elements of the game itself. Okay, so like any game where dice is a factor, there’s going to be a bit of randomness about it. But Culdcept Revolt feels like one of those games where computer players conveniently get consistently high rolls, while the human players are outright lucky if they manage to move more than two or three spaces in a turn. Not to mention that the cards you receive at the beginning of your turn are also completely random, which makes it hard to build a proper strategy from the outset. Sure, one could argue that the random cards are akin to an actual board game, but real board games usually provide you with different decks to choose from. At the very least, being able to pick whether you draw a monster, item or spell would help add to the strategizing.

Culdcept Revolt is a game that certainly showcases some fun and original ideas, and even includes the ability to save in the middle of a match to return to it later, which is perfect for a portable game given how lengthy the match-ups can be. But Revolt also isn’t a game for everyone, with its single player campaign teetering on the boring side. Thankfully, local and online multiplayer should have you and another player enjoying the game for what it is. If you have the patience for it, that is.