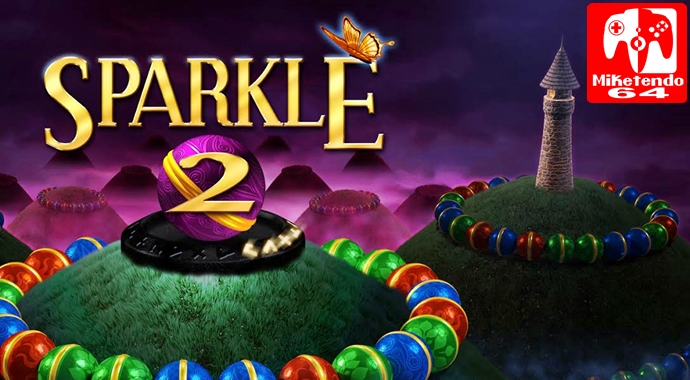 Sparkle 2 is a match-3 puzzle game where you launch orbs into a steadily moving line of marbles. If this concept sounds familiar, you’ve probably played PopCap’s Zuma, which is essentially a clone of a much older game, Puzz Loop. In other words, Sparkle 2 isn’t at all original, but it’s still a decent way to pass time.

Surprisingly, the game has a plot. A voiced cutscene reveals your goal is to locate five keys that unlock something of great value. From there, the game presents you with a full fantasy-based map, showing what your journey’s path will look like. Despite its simplicity, the efforts put into Sparkle 2’s presentation and lore impressed me.

Again, the gameplay is nearly identical to games like Zuma. A line of marbles constantly moves along a predetermined path that leads directly towards a hole. If too many marbles fall in, you lose. Your only defense is your trusty rotating Orb Slinger, a glorified crossbow that you can use to fire your own colored marbles. Match three of the same color to pop the marbles. And once they’re all gone, you clear the level. What makes each level unique is the path the marbles travel through. Sometimes there are even multiple paths to keep track of, substantially increasing difficulty. In addition, as you progress, the marbles get faster, increasing the pressure. Since you can complete levels within minutes, you’ll be cruising through the map in no time.

It’s a formula that works, but the controls and aiming leave something to be desired. I found using the touch-screen to be the most convenient control scheme. I need only tap the screen and my orb will automatically fling there. The analog stick and buttons are unfortunately not as precise. I’ve had issues where I launched my orb, and instead of achieving that match-3, it ended up landing between two differently colored orbs – a counterproductive move. If you hold the shoot button down, a line indicating where the ball’s trajectory appears to assist your aim. However, it’s a case of too little, too late, since speed is a crucial part of success. In this case, it’s much faster to simply use the touch screen.

Otherwise, the game is straightforward. A power-up system gives gameplay some depth. If you chain consecutive matches, helpful power-ups appear, such as a paintball that splashes a large group of marbles the same color and a wild orb that can be treated as any color. Utilizing the power-ups was the most entertaining part of the experience for a number of reasons. One, there’s the obvious thrill of exploding large groups of marbles. But it’s also satisfying to see how long you can extend the chain of matches, which the game keeps track of with a handy on-screen multiplier. In addition, you can equip passive upgrades as you complete levels. For instance, you can launch your orbs faster or occasionally get free wild orbs. Sparkle 2 does a good job of motivating you by always dangling the next reward in front of you.

Overall, you’ll have to adore the genre to keep that motivation up. There is quite a bit of content between the different modes, but it’s very repetitive. There are over 90 levels, and after the first 30 or so, the levels start repeating. While they get harder over time, introducing new colors or speeding up the marble line, the gameplay remains static throughout the entire story. You can shake it up by trying out the other modes, Challenge and Survival. The former merely asks you to beat each level in incrementally rising difficulty settings, and the latter is an endless mode. I appreciate a mode that tests your endurance, but I was highly disappointed that progress is only indicated by a vague star ranking as opposed to a solid time or point value. In fact, there are no scores in the game at all, which I feel could have increased replay value.

The presentation is fairly good for a puzzle game. The fantasy backgrounds and overworld map look nice. Even the marbles live up to the game’s title and sparkle vibrantly. A colorblind mode adds designs to the marbles, which makes them look even better, regardless of whether you need the setting on. And I was a fan of the orchestral whimsy fantasy music that sounds like something from the Harry Potter films. There was clearly extra effort put in to create an intriguing world to set this experience apart from its competitors.

Sparkle 2 may be a repetitive and unoriginal title, but it serves its purpose as an easily accessible match-3 puzzle game on the Nintendo Switch. I liked the presentation, but the gameplay grew tedious over time. Between the repeating levels and mediocre additional modes, it only takes a few hours to see everything this game has to offer. Sparkle 2 won’t make any lasting impressions, but it’s worth a try for fans of the genre.